As the former world squash champion and No1 publishes her autobiography, we look at the outstanding career of a great British athlete 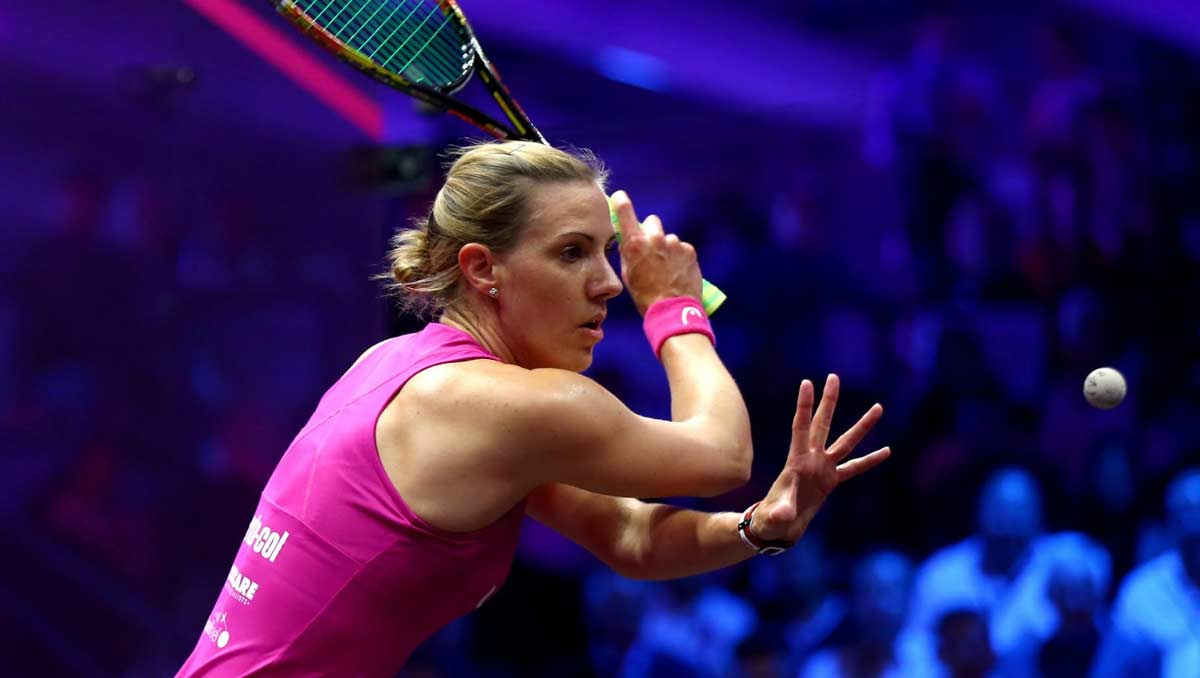 There is a sentence in the foreword to Laura Massaro’s autobiography, written by England Netball Head Coach, Tracey Neville, that sums up just why her story is so worth the telling.

“Most important of all, Laura should be a role model for young female athletes everywhere because hers is a story of resilience and of always striving to be better.”

That Massaro could arguably claim to be one of the finest athletes that the UK has produced in many decades would be enough of a recommendation to those who aspired to sporting success. And make no mistake, her chosen sport, squash, takes no prisoners in its demands on the body and mind.

What is more, hers has been a career of remarkable longevity, beginning with her part in helping to win the World Junior Team Championship as a teenager in 2001, and concluding with the Monte-Carlo Classic in 2018. She retired in 2019 with 23 titles from 43 finals, and with more than eight years ranked inside the top 10.

Yes, all that silverware and all that space in the history of women’s squash would be enough to inspire any young athlete.

But it is the quality of the woman herself, the determination and the iron will in overcoming life-long self-doubt and personal insecurity that lifts Massaro to another level, and her autobiography is as good a starting place as you could find for any hopeful world champion. The title sums it up: All In.

The scale of the mountain that Massaro had to climb to reach the pinnacle of squash was writ large from the first in the shape of a woman born just three months before Massaro, Nicol David. The Malaysian would rise to dominate squash at a prodigiously young age: she was already world No1 at the age of 22, won eight World Championships, and went on to accumulate nine and a half years at the top. 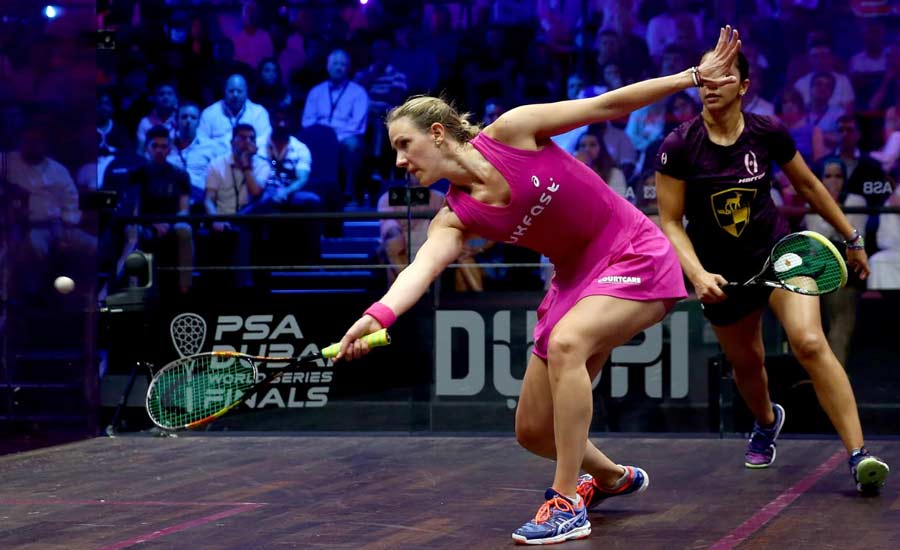 Perhaps not surprisingly, with a rival of this stature who happens to play in your own era, Massaro needed to devote a full chapter to her, headed “Chasing Nicol”. The Briton Massaro put it thus:

“Nicol David has been such an important figure in squash, especially in the women’s game, and there’s no getting away from the fact that her presence loomed over much of my career.”

Even the Briton’s own insecurities about her appearance—from her kit to how muscular she looked—seemed always to be thrown into sharp relief by the Malaysian’s pristine dress or sculpted thigh muscles.

Time and again, this iconic Malaysian acted as Massaro’s touchstone, yet the Briton picked one particular episode in her rivalry with David as the springboard into her autobiography. It was a significant moment in the final of the British Open in 2013, a match in which Massaro imposed herself on the defending champion, and ultimately won the battle.

And while their long rivalry, dating back to the under-14 Junior British Open, went on to reach almost 40 matches, and David retired with the bigger tally, it was Massaro who dominated the latter stages. David’s last World Series title was in 2015, while in that same season, the Briton went on a surge of wins to seal the No1 ranking by January 2016.

In essence, then, David became something of a metaphor for Massaro’s determination to overcome all her own doubts and perceived weaknesses, a channel for the negativity—from herself and certainly from others—into positive action.

There is one point, early in her career, when Massaro is beginning the lonely and stressful process of travelling to tournaments, trying to overcome her shyness, trying to find her way through the minefield of the tour’s ‘pecking order’, and she discovers that she is not getting the same level of lottery funding as her colleagues.

“For more than two years in my early 20s, I was told repeatedly that I didn’t have a bright future in the sport. Then, one day, I was in the England Squash offices in Manchester and… there in front of me was the confirmation that some players were on more lottery money than me, even though I was in the same ranking bracket. I was achieving as much but receiving less funding because they just didn’t rate me.

“It’s hard to put into words how dispiriting it was. As players we had all come through the junior system together and, in my mind, we all had an equal chance of progressing, yet for some reason I was the one who wasn’t good enough… So, on top of my own self-doubt, I had to deal with their doubt as well.”

But as so often in her journey, Massaro did not throw up her hands and throw in the towel: She recognised the injustice, and the inaccuracy, of the situation, and set about proving the decision-makers wrong. She worked harder and longer, changed her diet, and got ever fitter.

She was still often stung by the frank assessments of those around her, whether it was her father in her junior days, her husband Danny on the road, or any of several other coaches. She was also, if anything, her own toughest critic.

“I knew that I would never be seen as the world’s most talented player… Sometimes talent lies in getting the hard work done daily, keeping to a programme, however gruelling it is.”

“I guess, as DP [coach David Pearson] says, I overachieved in my career. I never had the luxury of destroying players through sheer skill. I had to earn everything through hard work.”

Yet in her inner recesses, there was always a deep well of resilience and an iron will.

She has read widely—about motivation, diet, sports psychology—and has found a lot of inspiration in the writings of philosophers. As a result, she has been willing to take on the ideas of others. As her career moved from one achievement to another, so she found those little extras to get her to the next milestone. She even, relatively late in her career, changed her racket grip—one of the most fundamental elements in squash player’s game.

It would be easy to be left with the image of a woman so focused on her professional life and with such a fierce will to win that there was nothing left for an off-court Laura. But she is a woman of many parts. 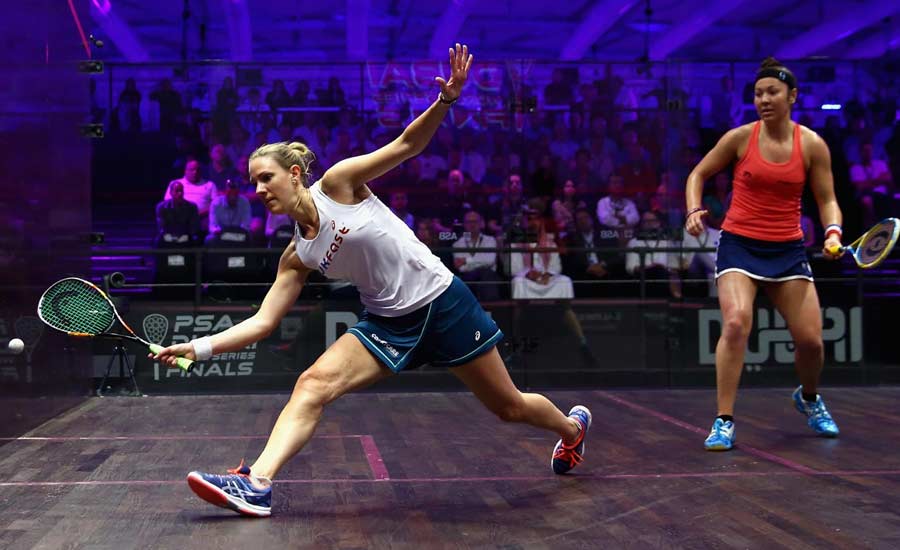 There’s the intelligent one, who put her plans to take a degree in sports psychology on hold, but has drawn on and applied many branches of science and psychology throughout her career. And in her diversions into the difficulties facing women entering elite sport, her analysis is perceptive and well informed.

Indeed, how many sporting autobiographies throw in elements of Martin Heidegger and quotes from Friedrich Nietzsche and Søren Kierkegaard to illustrate their motivation and problem-solving?

Then there’s the warm-hearted one who enjoyed the support of the women in her Lancashire league who took her under their wing as a teenager. They, and her fellow workers at the local leisure centre, supported her with their time and friendship, but also took such pride in their junior star-to-be that they organised fund-raisers to help her early career.

There’s also the political one, the woman who joined the campaign for the merger of the men’s and women’s tours in 2015, and for equal pay—and the resultant conditions for young women seeking a career in squash are all the better because of it.

There were down sides to the merger: the Professional Squash Association lowered the tin for women to come in line with men, a move designed to encourage more attacking play, but as always, Massaro rose to the new challenge, and worked on building her explosive capability at the front of the court. She went on to win her second British Open title the next year, and two consecutive World Tour Finals.

Finally, there’s the frank, honest, often humorous woman who has been brave enough to open her book to chapters by those involved in her story—among them husband Danny, coaches, psychologists, and therapists—and open enough to address issues around body image, and cliques in women’s sport:

“There is a cliché about women’s sport being bitchy and I’d love to dispute that but in all honesty I can’t.”

It is a fascinating read, and all the more so for shedding so much light on the struggles behind the headlines of success.

And while the vehicle for this particular journey may have been squash, one is left with the impression that Massaro would have applied the same energy, passion, intellect and sheer sweat to whatever road she took in life.

Even Laura herself has managed, now and then, to see the same winner in the mirror that the rest of us see:

“I had never thought of myself as a role model up until that point, but my World Championship win changed that. I felt a lot more comfortable with the idea that young women and girls in particular might look up to me as someone who had made something of themselves, and gone about it their own way. One girl in Chicago even set up a Laura Massaro fan page.

“I began to realise that people liked my stubbornness and my resilience and even the way I played. I might have still felt like Laura from Chorley but other people now looked at me and saw Laura Massaro, World Champion.”

And the glass box?

It refers, of course, to one of elite sport’s most stunning creations, a squash court that can be erected almost anywhere—and Championship matches have been played in front of Egypt’s pyramids and in the heart of New York’s Grand Central Station. It is illuminated on all sides, offering spectators a near-360 degree viewing experience of the gladiatorial contest within. While inside the box, the players can see nothing but the four walls, a small rubber ball, and their opponent.

Every flaw, every weakness is on full show—a nightmare vision for the insecure and self-conscious. Yet into this arena, the self-conscious Massaro stepped and conquered.

All In is published on 1 June, in paperback and hardback versions.