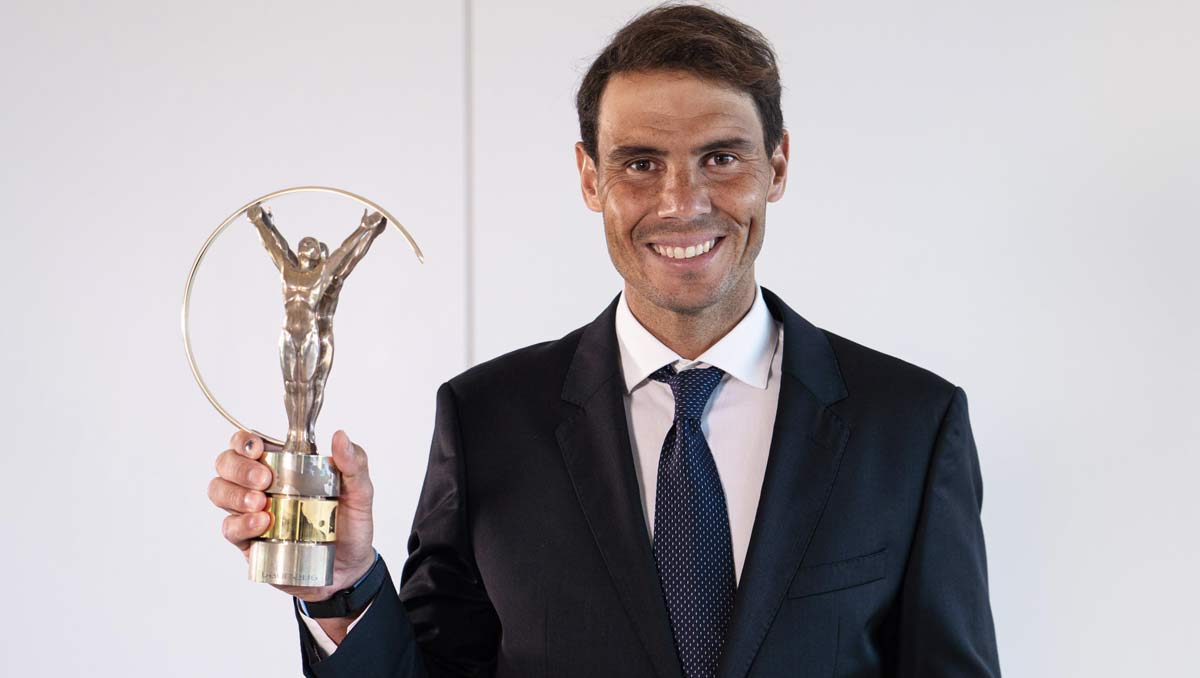 Spain’s Rafael Nadal was announced as World Sportsman of the Year after his 13th French Open win, which brought him level on 20 career Majors with Roger Federer, and Naomi Osaka, who won the US Open for the second time, took the World Sportswoman of the Year award.

“I want to say thank you very much from the bottom of my heart to the Laureus Academy. I have had some amazing competitors: the rest of the sportsmen probably deserve the trophy the same as me, but this was the year for me and I can’t be happier.

“Winning the French Open and equalling the 20th Grand Slam of Roger Federer has been an unforgettable moment. It means a lot to equal my great rival, but at the same time, my great friend. It’s something very special after all the history we have had together on and off court.

“The pandemic that we are facing is something unprecedented and I want to send a message of support to all the families that have suffered or lost somebody.”

Osaka made a powerful statement at Flushing Meadows in support of the ‘Black Lives Matter’ campaign by wearing different face masks in her matches, featuring the names of African Americans who died in recent years. She said:

“I’ve watched so many of my role models win this award, so it definitely means a lot now to be holding it.

“Regarding my activism on the court, I think it is important to use my voice, because for me I feel like I often hold back a lot and worry about what people think of me, but you know if you have a platform it is very important you use it. Looking ahead my main hopes for the future would be just to have helped or impacted as many people as I could and, hopefully be a better person.”

Another former Laureus champion, Lewis Hamilton, was also honoured for using his platform for social good.

The seven-time F1 world champion was the recipient of the new Laureus Athlete Advocate of the Year Award for his firm and outspoken support for racial justice, wearing a ‘Black Lives Matter’ race helmet and black race suit, and taking a knee at each Grand Prix. The Mercedes-AMG Petronas cars were painted in black livery as a statement of the team’s commitment to diversity.

Hamilton, winner of the Breakthrough Award in 2008 and the joint Sportsman of the Year Award last year, said:

“This past year has been incredibly difficult for so many, but it has also been heartening to see the power of our collective voices spark new conversations and change. The impact of each and every one of you who have stood up is so inspiring, so I want to thank you. Please keep fighting, keep shining your light.

“The global rising to address the longstanding issue of systemic racism and inequality in our society has been monumental, but we must continue to fight.”

On a similar theme, tennis icon Billie Jean King, who won 39 Major titles and has been a lifelong advocate for gender equality and a pioneer for equality and social justice, was honoured with the Laureus Lifetime Achievement Award. She was also the founder of the Women’s Tennis Association and Women’s Sports Foundation.

“Sport, especially tennis, has given me a wonderful opportunity to live my dream. Sport also gave many of us a platform to improve our world. As elite athletes, we are highly visible, we play on the world stage, and we are presented with the opportunity to make a difference to the lives of others. Over the years we have seen more and more athletes accept the responsibility of using their platform for good, and I hope this will continue for many years to come.”

Liverpool and Egyptian football star Mo Salah was honoured with the Laureus Sporting Inspiration Award to mark his unique contribution over many years to those in need and for those less fortunate.

As well as being an outstanding goal-scorer in football, Salah has proved himself to be a supporter of countless causes, and is a powerful advocate of women’s equality in the Middle East. He has been named by Time magazine as one of the 100 most influential people in the world.

Bayern Munich, winners of the UEFA Champions League, Bundesliga and DFB-Pokal treble, won the Team of the Year Award. Bayern became the first team to win the Champions League with a 100 percent record.

Canadian snowboarder Max Parrot was one of the most emotional winners when receiving the Laureus World Comeback of the Year Award after fighting back from cancer to win X-Games gold medals.

Patrick Mahomes took the Laureus World Breakthrough of the Year Award after leading Kansas City Chiefs in 2020 to their first Super Bowl appearance and win in 50 years, at just 24. Away from the field, he supports 15 community children’s projects with his foundation ‘15 and the Mahomies’. He was also at the front of an NFL athletes’ pressure group that petitioned the league to examine its behaviour and attitudes around racism and political protest.

The German sports-based community programme KICKFORMORE by KICKFAIR, which uses football to build bridges between cultures, particularly in areas with a high proportion of refugees, won the Laureus Sport for Good Award.

Chris Nikic, who became the first person with Down’s Syndrome to complete a full Ironman, received the most public votes in the global Laureus Sporting Moment Award. Nikic, 21, from Maitland Florida, made history, completing the 2.4-mile swim, 112-mile bike ride, and 26.2-mile marathon run in Kona in November.

Sportsman of the Year: Rafael Nadal

Sportswoman of the Year: Naomi Osaka

Team of the Year: Bayern Munich

Breakthrough of the Year: Patrick Mahomes

Comeback of the Year: Max Parrot