Jamie Carragher took to social media to single out Trent Alexander-Arnold for special praise following his sparkling performance for Liverpool FC in their 4-2 victory over Manchester United on Thursday night.

The England international was in superb form for Jurgen Klopp’s men at Old Trafford on Thursday night as he notched up an assist in Liverpool FC’s thrilling win.

Liverpool FC initially fell behind to Bruno Fernandes’ opener, but goals from Diogo Jota, Roberto Firmino and Mohamed Salah wrapped up the victory for the Reds despite Marcus Rashford’s second-half goal.

Alexander-Arnold helped to set up Firmino’s first goal just before half-time and the 22-year-old was in impressive form throughout for the Merseyside outfit.

Liverpool FC legend Carragher was delighted to see Firmino score twice against the Red Devils but he opted to single out Alexander-Arnold as his man of the match.

Posting on Twitter after the final whistle, Carragher wrote: “Huge win for @LFC & great to see Bobby back in the goals! But MOM was @TrentAA whose passing was outstanding.

“It’s unique that a fullback is the most creative player in any football team, but that’s what he is for this team! #MNULIV.” 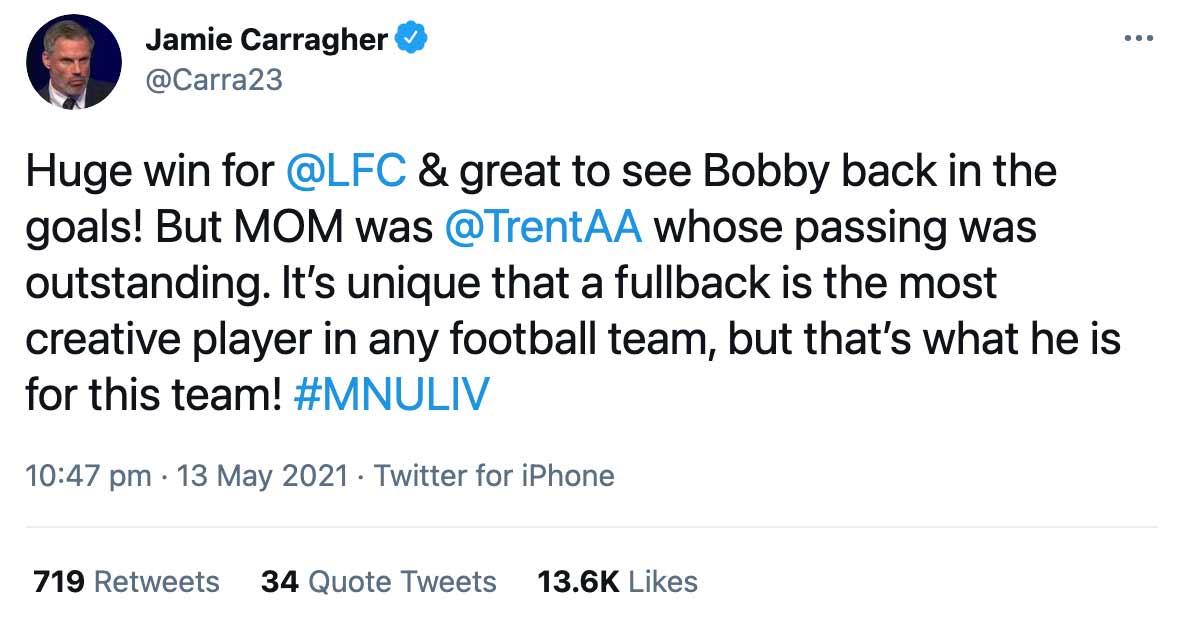 Liverpool FC will now look to continue their bid to finish in the top four this season when they take on West Bromwich Albion away from home on Sunday.