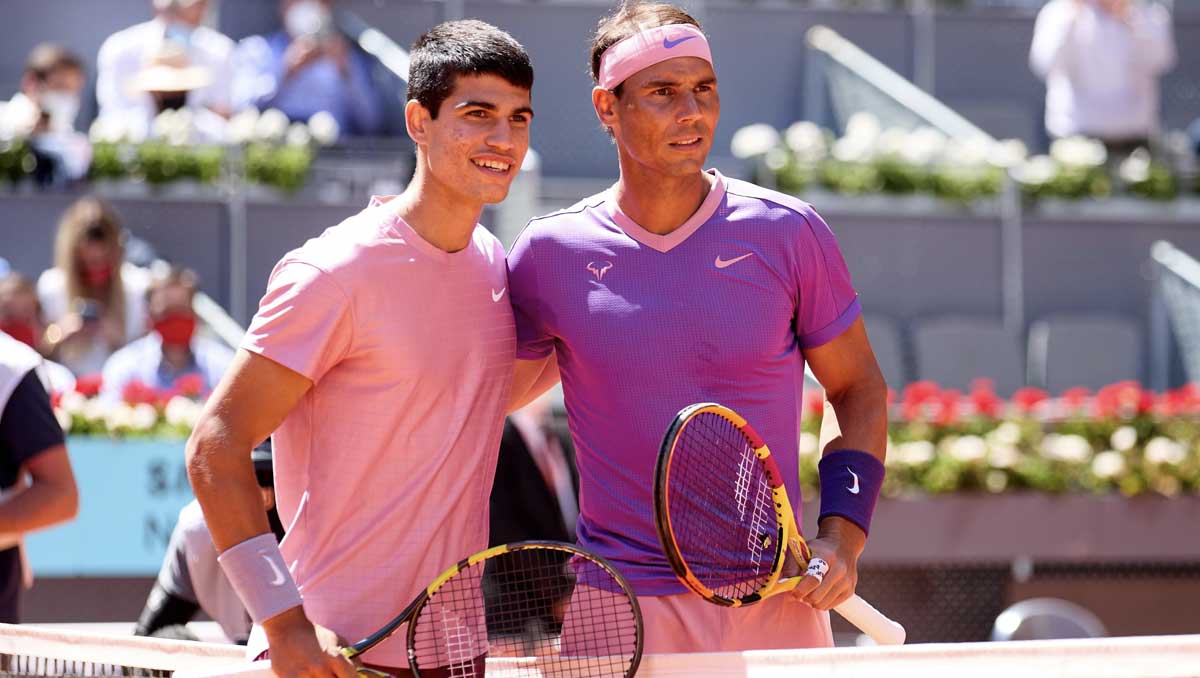 It is not many players who get to share a court with their idol. It is even fewer who get to do so on the beloved home clay of both men. And how many would be able to say that this was a gift on their 18th birthday?

Yet such was the scenario for the young man who turned 18 on the very day that he would play his hero and compatriot Rafael Nadal for the first time.

Carlos Alcaraz had been setting ‘youngest ever’ milestones for a year or more before this red-letter day. The most recent took him to a career-high 118: In Marbella this spring, he became the youngest tour-level semi-finalist since Alexander Zverev in 2014. He had already come through qualifying this year to become the youngest man in the Australian Open, and won his first Major match there, too.

And this week, he notched up his latest notable record, becoming the youngest ever match-winner at the Madrid Masters in his maiden Masters match. He beat Adrian Mannarino to take the Nadal record that had stood since 2004.

Alcaraz’s true prowess on clay—much like Nadal’s career-long prowess on the red stuff—was there for all to see when the tour resumed last August after its coronavirus lock-down. The teenager won three Challenger titles from four finals in Trieste, Cordenons, Barcelona and Alicante, and his ranking rise followed suit: up almost 200 places in eight months.

So Alcaraz would not forget his 18th birthday in a hurry, win or lose. He explained in his press conference:

“For me is amazing, no? To play in front of a crowd, especially to play here in Spain… I came to this tournament since I was young. I always wished to play here in Madrid… I watched Rafa Nadal a lot. Yeah, I always wish to play against Rafa, learn from him. I don’t know how to describe this feeling now. Is a dream come true.”

It was probably always destined to end this way, but it would be no fairytale ending for the teenage Spaniard. Despite working a break point on Nadal’s first service game, he was not the first player and will not be the last to have the door slammed shut. Instead it was the top seed who broke, and powered to a 6-1 first set, winning 12 of the last 15 points.

With the arena willing the youngster on, Alcaraz did break Nadal’s serve once in the second set, but ultimately was outplayed, leading to the expected Nadal victory after less than an hour and a quarter, 6-2.

Yes, there was birthday cake, and Alcaraz will undoubtedly have his successes both here and elsewhere, but it was Nadal who headed to the third round to face young qualifier Alexei Popyrin, who put out another teenager, the No14 seed Jannik Sinner 7-6(5), 6-2.

Nadal was full of praise for his young compatriot:

“When somebody at his age is able to do the things that he’s doing is because you have something special, no? And at the same time, he’s humble enough to keep working. He’s passionate about the game… I really believe that he’s a complete player.”

The man located at the other end of the draw this week was also hoping to win his first Madrid match, but not because he was newcomer on the big stage. World No2 Daniil Medvedev already had three Masters titles to his name, and had reached two Major finals. But he had thus far failed to win a single match in Madrid—or at the Rome Masters or French Open come to that.

The one clay Masters that had brought any success was Monte-Carlo, and he was thwarted there this year by contracting coronavirus. This, then, was his first appearance since being laid up by flu symptoms, and his opening gambit on clay.

He took on 21-year-old Alejandro Davidovich Fokina, who was making rapid progress up the ranks with his all-round power game and energy. Medvedev got the first break, and looking at the state of Fokina’s racket hand, it was no wonder that the Spaniard’s serving speed had dropped: raw patches on fingers and thumb, and the medic had to try and treat them all.

It worked: Fokina got the break straight back, fended off more break points, and turned the tables with his aggressive, all-court tennis to break for the first set, 6-4.

The Russian also took an early break in the second, only to have it wiped out. But Medvedev broke again and this time held serve to lead, 5-3, and levelled the match, 6-4.

He pressed Fokina hard in the opening game of the decider, but the Spaniard saved two break points. However, Fokina was finding it harder to stave off the more confident play of his opponent as Medvedev increasingly found his ruthless groove. The Russian broke twice, held for 5-1, and went on to win his first ever match in Madrid, 6-2.

His wit emerged before he left court, writing on the TV camera, “Love clay”, though that view may change when he takes on another born-and-bred clay exponent, Santiago champion Cristian Garin, who beat Dominik Koepfer, 6-3 6-4.

Until this spring, Dan Evans had not won a single main-draw match at one of the big clay tournaments: Not at the French Open, nor the three Masters in Monte-Carlo, Rome and Madrid.

Then, after scoring his first career title in Melbourne at the start of the season, he proved that his all-court, popular style of tennis could produce the goods on clay, too. He made the semis via three top 12 players, and most notably the world No1 Novak Djokovic.

And by the middle of the Madrid Masters, he had won two more matches, and against two resilient and experienced players, first Jeremy Chardy and then John Millman, both in gritty three setters.

In this super-tough quarter of the draw, Evans will next play former Madrid champion and No5 seed, Alexander Zverev, who beat Kei Nishikori, 6-3, 6-2. Evans told the BBC:

“It will suit him here because it is a very lively court, but if I get into the match and stay close I have a good chance to cause him some difficulties.”