The two former champions were playing for a record 57th time, and now have 36 Masters titles each 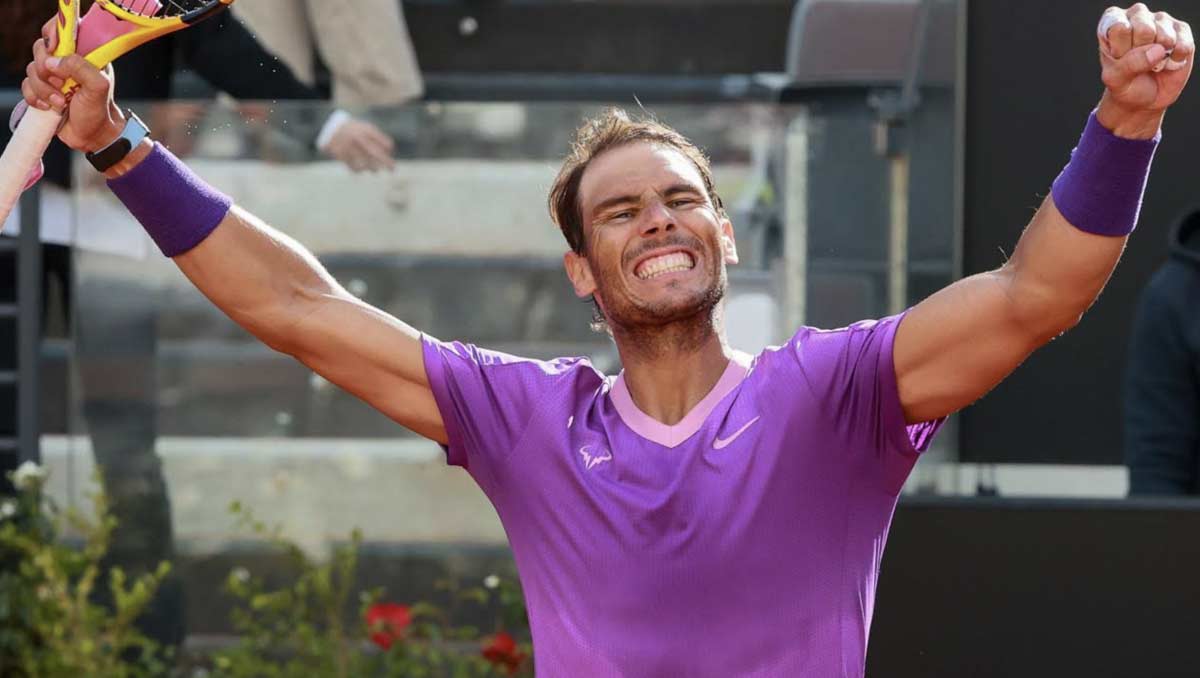 It has become an oh-so-familiar sight. Come the sharp end of tennis’s biggest events, there they are, No1 Novak Djokovic, with 36 Masters titles, and No3 Rafael Nadal, with 35 Masters titles.

They have the most played rivalry in men’s tennis, and this would be their 57th meeting. Between them they were set to win the title for the 15th time in the last 17 playings of the tournament, dating back to the first of Nadal’s nine Rome victories in 2005.

Nadal was meeting his great rival, five-time Rome champion Djokovic, for the 16th consecutive season, and for the first time since the Spaniard claimed his 13th French Open title last autumn.

Could he make a Paris-Rome double, following in the footsteps of Iga Swiatek, who won the women’s title two hours before?

Well this 57th encounter, their ninth in Rome, was a tough one to call. Djokovic had won 10 of their past 14 matches and was the defending champion, but Nadal had won their two most recent meetings in Rome, including the 2019 final.

Nadal had won just one title this year, in Barcelona, but lost in the quarters of both Monte-Carlo and Madrid.

Djokovic had also won just the one title this year, the Australian Open, but then lost surprisingly early in Monte-Carlo and Belgrade.

In Rome, though, each had beaten one of the clay Masters champions of this year in the quarters, Djokovic overcoming Monte-Carlo winner Stefanos Tsitsipas, Nadal beating Madrid winner Alexander Zverev, and they saw the funny side of earlier predictions that there was an imminent changing of the guard: After all Nadal, age 34, and Djokovic, 33, had become the oldest Rome finalists in the Open era.

Djokovic said ahead of the final:

“Well, Rafa and I had a little laugh today in the locker room after I won against Tsitsipas. We kind of joked that the old guys are still not giving up. I saw he said somewhere a few days ago that Roger, him and I are old, but I disagree with him. I think we’re showing some different, fresh energy. We had a laugh about it… I’m really glad that we are showing we’re not backing off from the NextGen attacks.”

If there was a fly in the ointment for the world No1, however, it was the effect of the rain on this week’s schedule. Rather like Iga Swiatek in the women’s final, the Serb had been forced to play part of his quarter-final and his entire semi-final on Saturday, while Nadal played his two matches on separate days.

It is not the first time that rain played its part in the Rome proceedings: The final between these same two in 2012 was forced from Sunday to Monday by torrential rain.

That was not predicted for this particular match, but would it have done its damage already?

Djokovic looked masterful in the opening games, deploying the drop shot and lob combo to great effect for three break chances in the second game, and he converted the last of them after more than eight minutes, weaving his web across the extreme baseline corners to draw the error from Nadal, 2-0.

When he is dialled in, few can match the precision of his line-hitting placement on both wings. It is ruthless, and even if an opponent can read what is coming, the final strike is eventually too far to reach. Meanwhile, the Serb’s defence is near-impenetrable, his speed and flexibility taking him to the extremes while still able to make a testing return.

However, Nadal is the most successful clay performer in tennis, and with a dedication and work ethic guaranteed to keep that ‘old’ body in prime condition. Sure enough, he broke straight back. After 20 minutes, they had only played three games.

Djokovic came under heavy pressure in the seventh game, a long battle full of drama, as Nadal raced in for a sliding pick-up and fell heavily over the edge of a line. It looked dangerous, but he seemed unhurt. However, he was angry, and there was some swift hammering to realign the tape, but he could not convert his break chance: Djokovic held, 4-3.

Come 5-5, Nadal got his next chance. He was now feeling the court and the conditions to perfection, and bringing his power-drill top-spin forehand into play. The pressure showed in the Djokovic serve, as his ball-toss went awry, and Nadal took advantage of the second serve. The Spaniard broke to serve for the set, and his 15th forehand winner brought up set point. He took the lead, 7-5, after an hour and a quarter, with 85 percent of first serves, and twice as many winners as errors.

It was probably a surprise to nobody that this battle was far from done: Djokovic hit back quickly in the second set as his serving level rose and Nadal’s slipped a little. The Serb broke and held, 4-1, and then fired an off-backhand winner for another break chance. He went on to hold an extraordinary 6-1 set.

He then got the first break chance in the final set, 2-2, courtesy of his profitable drop-shot and lob play, and was certainly the man in control, pushing Nadal from side to side and with his serving stats now the better of the two.

However, the Spaniard dug in and held, and turned the tables to break for 4-2. His signature lasso forehand held for 5-2, and he worked match-point in the next. Djokovic held, 5-3, but it simply delayed the inevitable. Nadal served it out, 6-3, and jumped and pumped for joy.

The remarkable Spaniard had sealed his 10th Rome title, and drawn level with Djokovic again with 36 Masters.

They were, as always, generous in their acceptance speeches, also showing their language proficiency by speaking in Italian. Nadal said:

“It is always an honour to face you, Novak. You are playing great, you won in Australia, now let’s see what happens in Paris.

“I won Rome for the first time here 2005. I played five hours five… 16 years later I am still here. The emotion I get playing here is tough to explain, and this is one of the most important in my career.”

However, it was Djokovic’s parting shot that drew the laughter. Referring back to the suggestion that the NextGen were hard on their heels, he said:

All three will be taking on the rest again at Roland Garros in a fortnight’s time. How competitive Federer will be after playing negligible matches since his knee surgery in 2020, it is far too early to say. As for Djokovic and Nadal, though, who would bet against them?