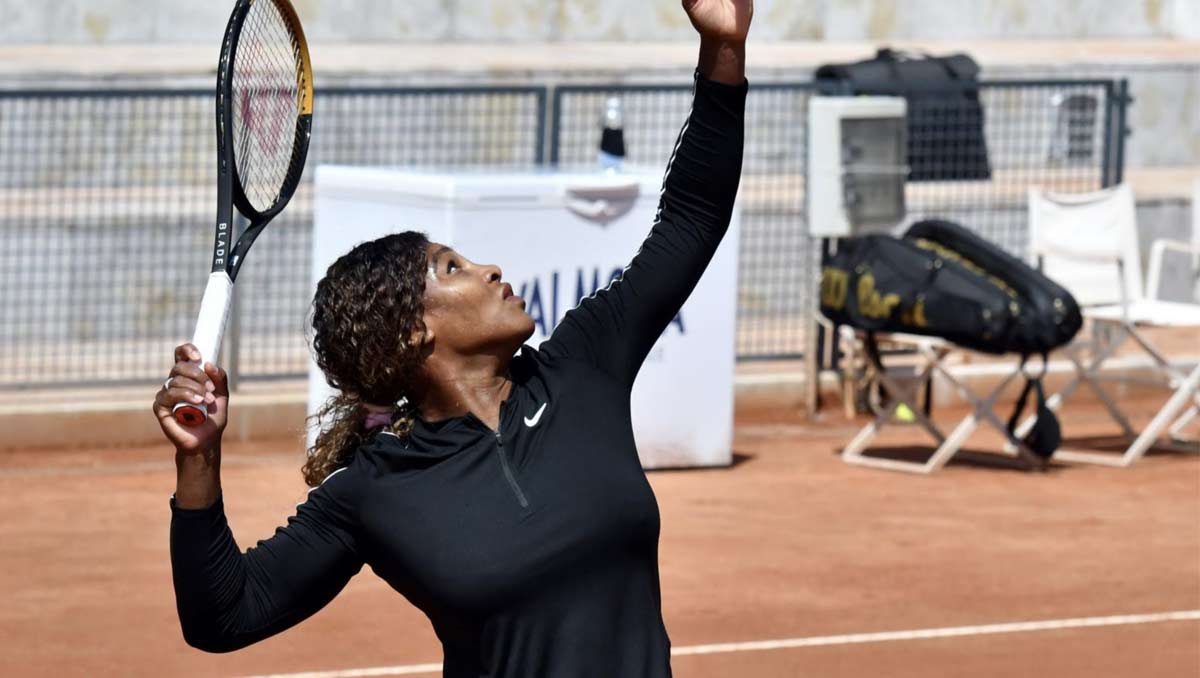 The depth and quality of the women who embarked on Wednesday’s packed schedule at the Foro Italico was outstanding.

But not for the first time, one of the women taking to court among the last 32 at the Internazionali BNL d’Italia ticked most of those boxes and more. Serena Williams has come to dominate the record-books through the two decades and more since she won her first Major title at the US Open while still a teenager in 1999.

She has gone on to win 23 Majors—and her campaign to equal the 24 of Margaret Court that straddled the amateur and Open eras continues.

She is one of only two women, with Steffi Graf, to earn the Golden Slam, and has won more top-tier WTA events than anyone else, 23, and more titles overall, 73.

She has also won more singles matches than any other active woman, 851, and when she took to court at the Italian Open for the 17th time, in a tournament she had won four times, she would tick off her 1,000th professional match.

Certainly a lot had happened in Williams’ life since she last won the title at the Foro Italico in 2016.

She won her 23rd Major four years ago while two months pregnant, and had been attempting to claim that 24th ever since returning from maternity leave in 2018. And she came desperately close four times, at Wimbledon and at the US Open.

On the resumption of the 2020 season after the coronavirus closure, she reached two more Major semis, but aside from those, wins had proved hard to come by since winning her last title in Auckland at the start of 2020.

But something else had changed since that 2017 Australian victory, too. Now a mother, Williams was edging towards her 40th birthday, and a quick look at some of the recent Major champions during the last three years highlighted the inexorable march of time.

Naomi Osaka won the first of four Majors just before she turned 20. Ashleigh Barty won the French Open just weeks after turning 23. Bianca Andreescu and Iga Swiatek each won their first Major as teenagers, and Sofia Kenin did so at the age of 21.

Just one woman had broken the hold of those young champions in the last couple of years, and that was Simona Halep at Wimbledon in 2019—and even she was a full decade younger than Williams. Everyone else ranked higher than the extraordinary American was at least 13 years her junior, some considerably more.

Little wonder, perhaps, that the Williams schedule has been carefully paced, with her full focus on the Majors. Since reaching the semis at last September’s US Open, she had conceded walkovers at the French Open and then this year’s Yarra Valley Classic. She had not played, in fact, since her semi run at the Australian Open.

Her resumption of competition at one of her most loved and successful clay events, then, was already of note. Also, perhaps, a show of intent for the coming two Majors at Roland Garros and Wimbledon.

Yet she remained, as she has often been in more recent press conferences, a woman of few words, such as when asked about her near-invisibility during her build-up to Rome.

“I really try not to get involved too much in what people say about me, because I feel like it can make you nuts… I think that’s one thing I’m really good at, is just to not really engage so much, but I do feel like, because I don’t do a lot of sport content, people are wondering if I’m playing, and I have to say I always am, you just don’t see it. I don’t show what I do. I don’t always show my cards.”

So how had the training been going, how did she feel ahead of her return?

“I trained for the past two-and-a-half weeks at Patrick’s academy, and then training a lot on the clay in the US with team members…

“I feel like I’m good. I’m in Rome. I’m going to have some good matches here hopefully, and then I will be at another Grand Slam which always makes me excited.”

So what of her 1,000th match, played against 24-year-old Nadia Podoroska, ranked 44 but up from 165 last September? The young Argentine did, after all, bring a decent clay pedigree from 2020 with her—a semi run in Prague, then the semis at the French Open via qualifying.

“She definitely knows how to play. She plays with a lot of power. I was watching her earlier this year actually so it was good. I was able to see her game a little bit.”

Then the curtain came down again: She was going to give nothing away:

She would answer her own question after fewer than two hours on court, where the young clay-court Argentine added another big win to her resume. She beat Williams, 7-6(6), 7-5, to score her third career win over a top-10 player in the last eight months.

Williams said afterwards that she would discuss with her team whether she might use the extra week before Roland Garros to play some more matches:

“Maybe I do need a few more matches, so I’m going to try to figure that out with my coach and my team and see what we would like to do. But, yeah, I just feel like it’s different. I have been training for months, but it feels definitely different on clay to make that last adjustment.”

But what of those other Major champions, former No1s, and women ranked above Williams in the draw? Well there were certainly mixed fortunes, with the worst luck hitting defending champion Halep—hit by injury again, which forced her to retire in the second set against former No1 and Major champion Angelique Kerber.

Kerber will next face another former French Open champion, Jelena Ostapenko, for a place in the quarter-finals. The Latvian, still just 23 years old, took out Aussie qualifier Ajla Tomljanovic, 6-2, 7-6(3).

Two of the four former champions in the draw did progress: Elina Svitolina battled past Amanda Anisimov, 2-6 6-3, 6-4, to set a third-round match against Garbine Muguruza, while Karolina Pliskova beat Anastasija Sevastova, 6-2, 6-3, to set an unexpected showdown with former Major finalist, Vera Zvonareva—who put out Petra Kvitova, for whom Rome continues to be a step too far: eight appearances, eight match-wins—with the first, incidentally, coming against Zvonareva back in 2010.

However, Swiatek, the reigning French Open champion, beat former Rome and US Open finalist Madison Keys, 7-5, 6-1, and will next face Barbora Krejcikova, who beat Kenin, 6-1, 6-4.

Putting aside Williams’ loss—and an opening match against a strong clay player after so long away was always going to test the former champion—the biggest upset was the defeat of No2 seed Osaka by Jessica Pegula, 7-6(2) 6-2, though the American had been on a fine run of form this year, claiming five top-10 wins so far.

Osaka, never entirely comfortable on clay, blew hot and cold, spraying too many errors and looking ill at ease with her environment for much of the match.

No such problem for the 2019 French Open champion and world No1 Barty, though, who advanced to a meeting with Veronika Kudermetova in Round 3 with a win over Yarolslava Shvedova, 6-4, 6-1.

Just five Major champions left standing, then, and only four former No1s. Two of the former Rome champions are gone, and only five of 2021’s titlists remain.

And Williams will have to regroup and refocus for some more tough battles if she is to finally get that 24th crown.