Emotional Czech won five doubles Majors, but this was only her fifth Major singles appearance 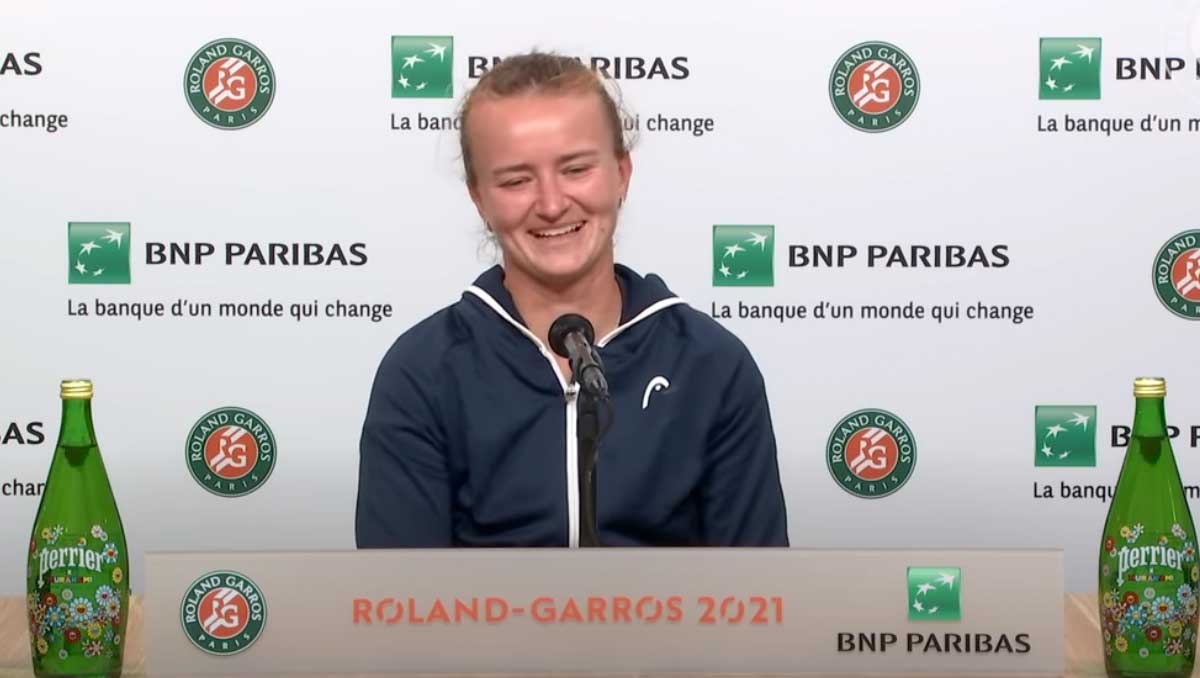 Neither of the debutante Roland Garros finalists had done it the easy way, with both world No32 Anastasia Pavlyuchenkova and No33 Barbora Krejcikova beating multiple higher seeds and at least one Major champion on their way to a first meeting with each another.

Pavlyuchenkova, just days short of her 30th birthday, had nabbed one of the last seedings, 31, but had faced and beaten No3 seed Aryna Sabalenka, No15 Victoria Azarenka, and No21 Elena Rybakina to reach not just her first Major final but her first semi-final. Three of those matches went to three arduous sets, too. What is more, it made the Russian the first woman to play more than 50 Majors before reaching her a final: a record.

Krejcikova, a formidable and successful doubles champion with five Majors and the No1 ranking to her name, was now, at the age of 25, playing just her fifth Major singles draw in Paris. What a transformation for the Czech woman.

Ahead of last year’s Roland Garros she was ranked 114, then reached her biggest final in Dubai this year, and went on to win her first title in Strasbourg. In Paris, she beat the likes of Maria Sakkari, Cori Gauff, Sloane Stephens and Elina Svitolina, and as if her singles wins were not enough to impress, she also made the final of the women’s doubles.

Given their prodigious achievements this fortnight, it is probably no surprise that both women were making huge strides in the rankings—with more for the winner.

Pavlyuchenkova was guaranteed to return to the top 20 for the first time since January 2018, and could rise to No14—just one short of her career-high set a whole decade ago.

As for Krejcikova, she was sure to move to at least No21, going as high as No15 with the title. But she could also reclaim the doubles No1 ranking if she won that title with partner Katerina Siniakova.

If there was a question mark over Krejcikova, it may have been her dramatic final lasting more than three-and-a-quarter hours against Sakkari: She had through the fortnight notched up 11 hours 40 minutes in her singles campaign—plus of course four doubles matches. In contrast, Pavlyuchenkova had played well under 11 hours, though she too had reached the quarters in doubles.

But rather than fatigue, it looked as though nerves were perhaps the biggest barrier for both women to overcome. Each was broken in their first service game, feeling more comfortable going for their returns.

However, Krejcikova was the first to hold, and quickly looked right at home, taking the ball early, and forcing mistakes from the Russian. She was using all her doubles skills to come forward, throw in test dropshots, and held again for a 4-1 lead.

Still she went after the Pavlyuchenkova serve and broke again, apparently unable to put a sliding foot wrong. She broke again to serve for the set, and sealed it in barely half an hour, 6-1.

The quality was rising from both as they began the second set, with both finding depth, off the baseline, angled slice and now more drop shots from Pavlyuchenkova as their tactics began to test and probe one another.

The Russian fended off a dangerous break chance in the first game, and then went on a run of games to lead 3-0. She was now striking the ball cleanly, with more confidence, and punishing any less-than-perfect serve from her opponent. The result was another break, which was just as well, because Krejcikova ran her hard to the backhand wing and drew enough errors with her angles for a break back.

But the Czech tactics had worked another problem for Pavlyuchenkova, whose left knee had been taped for the entire tournament. Now she stretched and took the strain on that same left leg, and tweaked a muscle that needed a medical time out to apply strapping to her thigh.

Would the pain killers kick in quickly enough to help her take the set? The reassurance of that leg support saw her hold firm in the centre of the baseline and strike hard to break again: She took the set, 6-2.

In the early goings of the third, it was hard to see in which direction the match would go as a break apiece took them to 3-3. But Krejcikova was hitting a purple patch again, as a love hold preluded three break points, and a curving off-forehand winner did the job.

She served to hold, 5-3, plying the angles and spin to wonderful effect. Then in the blink of an eye, she had two match points, but Pavlyuchenkova found four good serves to hold her off—for now.

There looked to be a moment when Krejcikova wavered, a double fault and a couple of weak serves, but her work on the ball from the back of the court proved to be enough, and a 34th winner crowned her as the new French Open champion, 6-4.

The young Czech struggled to speak, wiped away the tears, summoned all she could for her former mentor, Jana Novotna, who did in 2017:

“I was going through a really hard time when Jana passed away, I was with her most of the time. Pretty much the last thing she said to me was, Just enjoy and just try to win a Grand Slam, and I know somewhere she is looking at me… Amazing I had a chance to meet her and she was such an inspiration to me.”

It was a fittingly emotional conclusion to an extraordinary fortnight—and of course her fortnight is not over. She goes for the doubles title on Sunday.