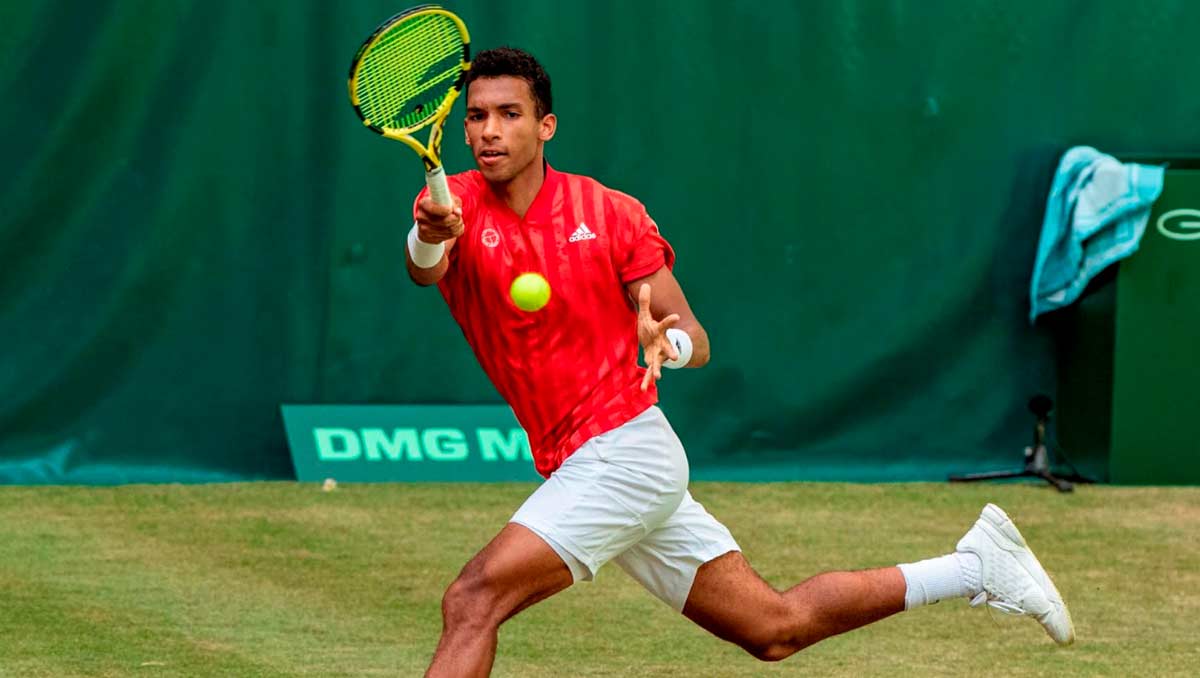 There was a lot of talk of birthdays in the run-up to a first meeting between 20-year-old Felix Auger-Aliassime and 39-year-old Roger Federer.

The 10-time former and defending Halle champion will turn 40 in just three weeks’ time, on the very same day as his young Canadian second-round opponent turns 21—on 8 August.

Federer though shares his birthday week with a couple of other players who were notching up tennis records long before Federer became a household name.

Rod Laver will be 83 the day after Federer’s 40th, while Pete Sampras turns 50 just three days later, on 12 August—the same date, incidentally, on which Stefanos Tsitsipas was born in 1998.

Perhaps it was in the stars, for Leos are… well the name speaks for itself.

The 19-year age difference with Auger-Aliassime, however, was the biggest in Federer’s 1,521 career matches, though the Swiss had also played, and beaten, the Canadian’s young compatriot, Denis Shapovalov—more than 17 years younger than Federer.

By the time Auger-Aliassime faced Federer for the first time—aside from some practice sessions in Dubai—the Swiss was in pursuit of an 11th title in Halle, a record 20th grass title. The turf, both in Halle and Wimbledon, is the super-star’s favourite surface, and here was the season he had been looking forward to, and preparing for, ever since he exited the tour a year and a half ago for double knee surgery.

Yes, he had played a match or two in Doha to test things out, and then done better at Roland Garros than he expected—three wins, the last a three-hour, 35 minutes battle.

But it was all about being fit enough to play at Wimbledon, with Halle his warm-up event, where he had never, in 17 previous appearances, fallen short of the quarters. If he was to maintain that record, he would have to find a bit more sharpness than he had in edging qualifier Ilya Ivashka, 7-6(4), 7-5.

And make no mistake: Auger-Aliassime, for all his tender years, was a quality opponent, one who reached a career-high 17 at the age of 19 and had eight finals to his name, not least two on the grass of Stuttgart, including last week.

Now with the guiding hand of no less a coach than Rafael Nadal’s uncle Toni—who over the years had learned a thing or two about beating Federer— Auger-Aliassime was a dangerous man to find so early in the Halle draw, and his all-court skill and athleticism were soon on show.

The match started very much like Federer’s first match, with a love hold by his opponent. But Federer too was looking sharp on serve, and after five games, each man had dropped only one point on serve.

Both were already breaking out some net attacks, too, making the most of the fast and hot conditions. They were going at a rate of knots in between points, too, taking around 12 minutes for five games.

Again, rather like his match against Ivashka, Federer found himself fending off two break points at 2-3, as Auger-Aliassime upped the pace and pressed Federer to the wide corners, but his serving was hitting the marks with welcome accuracy, and he held.

Then, in the blink of an eye, it was the Canadian’s turn to come under pressure courtesy of a blistering forehand Federer winner. The Swiss blocked back a serve, and then attacked the next shot to slot a winning backhand down the line. He had the break and a 4-3 lead, and another forehand winner consolidated for 5-3.

Auger-Aliassime was not fazed, held to love, and forced Federer to serve out the set. He had stressed ahead of the match:

“If I want to give myself chances to win, I will have to dictate the points that I can dictate, starting from my serve. And then we’ll see on the return what I can do to create myself opportunities.”

And he was being as good as his word, playing with attack, and earning two break chances. Federer had to find his best serving to keep the young player at bay, and having missed a few first deliveries, he found his accuracy again at the key moment, saved them, and took the set, 6-4.

They had won exactly the same number of points, 28, and their serving stats were also near identical, with rather more winners than errors on both sides.

However, Federer came under pressure again in his second service game, as he unleashed three unforced errors, the last an easy backhand volley into the net. It had him facing 0-40, but once again, the Swiss found the accuracy when he needed it, and edged the game, finishing it off with a two-volley play.

Auger-Aliassime is not short on net skills either, and his speed in the rallies, and eagerness to take the ball early, brought another break chance in the sixth game. He had earned plenty of opportunities, and it was only a matter of time until he got his reward. He broke for 4-2, held to love, 5-2, and made another easy hold for 6-3.

Federer seemed at times to lack timing and speed against the pace of his young opponent. Perhaps the legs were tired, or the body just struggling to handle the heat, but he was on the back foot a too often. His serve was not earning its usual free points, either, and it all led to 0-40 in his opening service game of the decider. He pulled back to deuce, but a wide backhand from Federer brought up a fourth chance, and another backhand went long. The Canadian had the break, 1-0.

He then ‘did a Federer’ with a 70-second hold of serve, while the Swiss himself moved as though he had weights in his shoes, without the usual explosive or confident movement. That was exposed by another break of serve, courtesy of an uncharacteristic forehand volley into the net: 3-0.

The stats showed a sinking serve rate, too, under the 50 percent mark almost across the board. Federer held for 1-4, but his body language at the change of ends spoke volumes: head down, no movement in the face, a downcast figure.

The end, then, became inevitable, a love hold in what had been a fine serving display from Auger-Aliassime, with an ace, 6-2.

The Canadian has made no secret of his admiration for his idol, and will treasure this first—and what may be his only—win against the great man. Auger-Aliassime said:

“It’s an amazing win, I didn’t expect this… Roger was my idol like many of us growing up, so first of all it was a huge honour to play him before he retired and to beat him is something amazing that I will always cherish.

“I always thought he would be gone when I arrived, he was already winning Grand Slams when I was five years old. I never expected to play him. Now to be on the same court as him and get the win, it’s an honour for me.”

So the young lion from Canada got his win over the old lion from Switzerland, and there are certainly echoes of a match played way back in 2001, when Federer was a month short of his 20th birthday, and his own idol, Pete Sampras, was approaching his 30th. The young Wimbledon pretender beat the defending champion in their one and only meeting, and would go on to take Sampras’s record at Wimbledon and in overall Majors.

Sampras had one more Major title in him, and then retired at just turned 31. Can Federer hope to do the same? Or have those 23 years on the tour, 20 Majors, 103 titles and three knee surgeries finally beaten him. At the time of writing, two and a half hours after the match, he has yet to say.