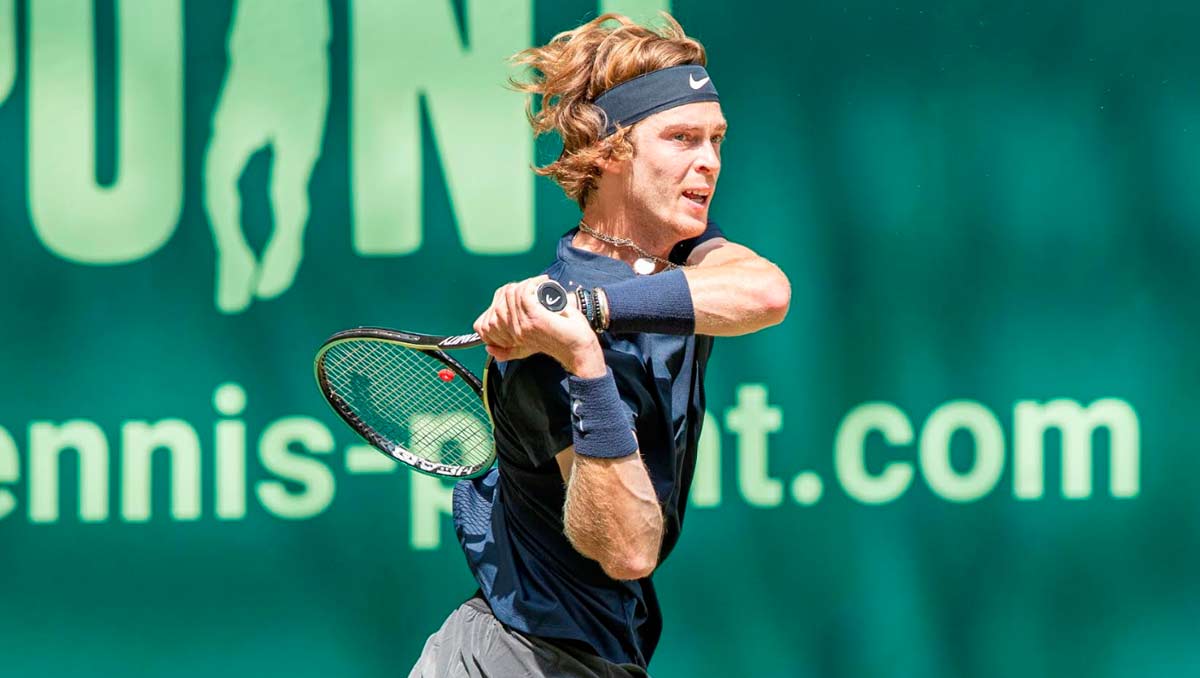 Few need reminding that the last year or more has had a huge impact across the globe. By many measures, tennis professionals have had it easy: the tour opened up for them to ply their trade last August.

And while many tournaments still could not make it back onto the calendar, a lot did, including all the Majors except Wimbledon—though this year, the oldest and most prestigious tournament of them all will be the first to have a capacity crowd for its finals.

But while there have been playing opportunities, the limitations imposed on travel, on quarantine, and in bubbles, even around the tournament facilities, have remained very tough, with new regulations even extending onto court. No longer can ball-kids fetch towels—or anything else—for players, and a good few events have replaced line judges by electronic calling.

This week is a prime example: the cinch Championships at Queen’s do have lines-people, the Noventi Open in Halle does not. The former has a 25 percent capacity, Halle considerably less. Indeed the absence of fans, and with them any sense of competitive atmosphere, has had as big an impact on the players as anything else during these Covid-impacted months.

Even so, some players seem to have come through it all even stronger than they started it. Andrey Rublev began 2020 ranked 23, and by the time the tour locked down, he had edged up to 14—a strong run, certainly.

But on the resumption of pro tennis last August, he became one of the stand-out players, reaching the quarters at the US Open and then at the French Open—followed by the same in Australia at the start of this year.

Along the way he won on the clay of Hamburg and the hard courts of St Petersburg and Vienna. It was all enough to qualify him for his first ATP Finals, the last in London, albeit played in an echoing, empty O2.

Rublev’s winning ways continued with the start of the new year, and a clean sweep at the ATP Cup before that quarter-final run in Melbourne. There must have been some frustration, then, that he could not improve on his No8 ranking after the pro tours allowed players, if they chose, to opt out of tournaments due to health concerns without suffering ranking-point penalties.

That has now changed, and points can be lost as well as won, but Rublev has undoubtedly been one of the players to suffer as a result, pinned at No8 until this April despite not falling short of the semis through Rotterdam—which he won—Doha, Dubai and Miami, which was his first Masters semi. He bettered that with a final finish at the Monte-Carlo Masters.

By the time he arrived on the grass of Halle, now ranked at No7—ahead of Roger Federer—he had accumulated 29 match-wins, and more notable still, had won more matches since the start of 2020 than any fellow player, 73 of them, compared with Novak Djokovic and Stefanos Tsitsipas on 68 apiece.

And as well as those three consecutive Major quarter-finals, and two big runs at Masters level, Rublev was proving himself almost impregnable at the ATP500 level. Rotterdam represented the fourth straight 500 title, a 23-match stretch, halted in the semis in Dubai.

With his run at Halle this week, he was now up to 28 wins for two losses at the 500 level, but it so happened that he would face a three-time 500 champion in the shape of Nikoloz Basilashvili, who beat Rublev in the 2019 Hamburg 500. The young Russian avenged that loss en route to his fourth ATP 500 title at Rotterdam, but the men were nevertheless two wins apiece as the engaged in their fight for a final place in Halle.

Rublev ran away to a great lead in the first set, dominating with his pace through the court, and his easy changes of direction. After 20 minutes, he led 5-0, but after one more game, Basilashvili broke with the usual protocols and called for the trainer ahead of Rublev’s serve. The Georgian had extensive treatment on his thigh, while Rublev hovered around the back of the court, but it did not disrupt the score: 6-1, Rublev.

However, Basilashvili began to regain his form in the second set, cutting down on what had been a high error rate in the first set to single figures, while upping his winner rate to double digits. He broke Rublev for a 4-2 lead, held for 5-2, and saw Rublev grow increasingly vocal on his errors.

Basilashvili served out the set, 6-3, and there was little between the men at the start of the third, but Rublev gradually regained his focus and accuracy, and broke in the sixth game of the decider, 4-2. He went on to serve out his place in the final, 6-3, after an hour and 50 minutes.

The slender Russian is such an expressive, vocal bundle of energy on court, it sometimes comes as a surprise how shy is his body-language and how quietly spoken in the interviews. Yet even so, his words this time had to concede just how well he had been playing throughout the year:

“It’s my first final on grass and in Halle. Already won on clay and hard courts and indoors, and looks like I can play on grass as well.

“I had good opportunities to break him in the second set, some quite easy forehands and I stressed a little, showing my emotions. I then came back and stayed calm, until the last game. But I won.”

So Rublev, still just consolidating his No7 ranking, is certain to rise to No3 in the Race to Milan, behind only Djokovic and Tsitsipas. He will now face Ugo Humbert—who beat Felix Auger-Aliassime in the other semi—for the title.

He is already up to 33-9 for the season, second only to Tsitsipas’s 39, and he extends his lead on the tour with 74 victories since the start of 2020. And as he said, he has turned his hand to all surfaces and environments.

Can he, then, complete his set of Major quarter-finals at Wimbledon? It is entirely possible.