Two years after painful Wimbledon loss and two knee surgeries: “The goals always have to be high or I wouldn’t be playing” 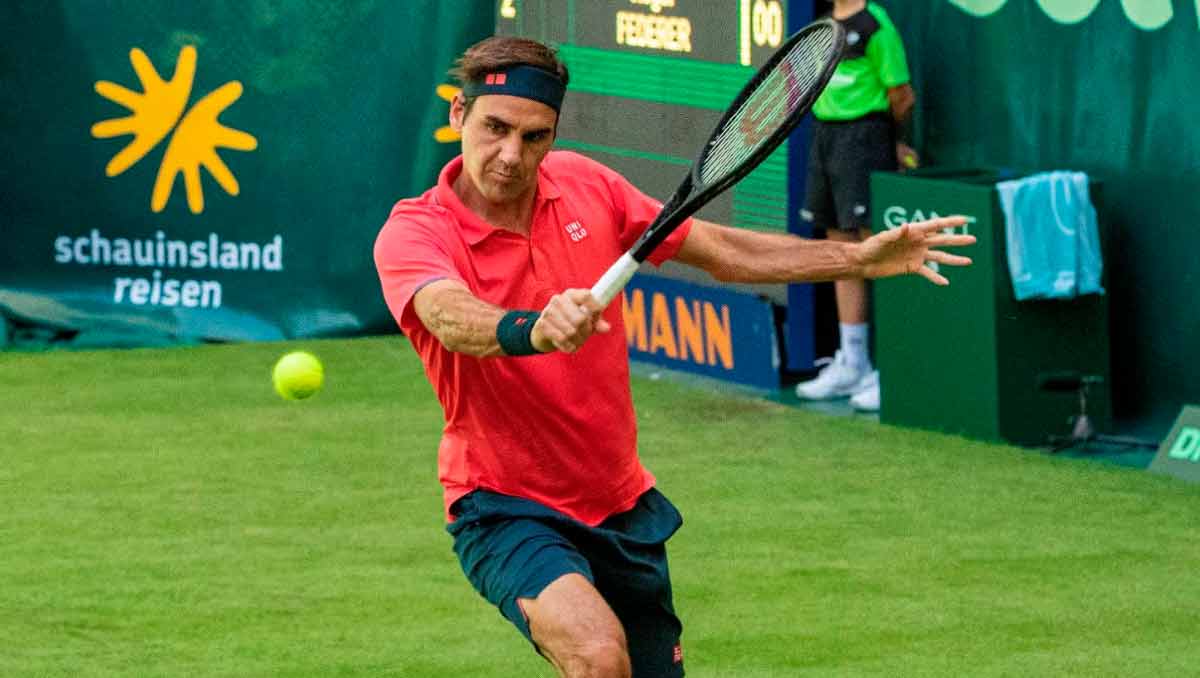 Never perhaps has Roger Federer faced such a daunting route to the title in one of his favourite haunts, Halle Westfalen.

But then not since winning for the first time has Federer played there at a ranking of eight which, combined with a seeding of No5, has left him prey to one of the toughest draws Halle has ever seen. He is one of four men ranked in the top eight, one of eight seeds ranked 17 or above. And that is not counting the slew of players ranked in the 20s.

But ever since he first played on the German grass in the lush countryside of Westphalia, age 18, he has reached at least the quarter-finals. The last time he failed to get to the semis was in 2001, age 19.

He won the first of 10 titles in 2003, a notable prelude to his first Wimbledon title a few weeks later.

And he did not lose in Halle again for 29 straight matches, losing the 2010 final to Lleyton Hewitt.

Now back in Halle this year for the 18th time, and hoping to defend the title he won in 2019—for Halle was a victim of a complete abandonment of the grass season last year due to the coronavirus pandemic—he is up to 68 wins for seven losses.

There is certainly no getting away from the Swiss star’s love for, and prowess on, grass. Should he win No11 in Halle, he will be up to 20 grass titles, including a record eight at Wimbledon—a total of nine more than the next in line, Bill Tilden and Pete Sampras.

Federer’s tally on the green stuff is 188 match-wins, three more than the second in line, Jimmy Connors on nine grass titles, and with far fewer losses.

However, if the defending champion is to get to the quarters again, he will have to beat world No17 Hubert Hurkacz, who won both the Miami Masters and Delray Beach this season, or No22 Felix Auger-Aliassime, a man who will turn 21 on the same day, 8 August, as Federer turns 40. The young Canadian has reached two finals this year, including on the grass of Stuttgart last week.

For Federer to reach the semis, he may have to beat world No2 Daniil Medvedev, runner-up at the Australian Open and one of the most prolific winners on the tour since last autumn.

And to make the final, there could be the small matter of No3 seed Alexander Zverev, twice a runner-up who beat Federer in the 2016 semis, and has beaten the Swiss in three of their last four matches.

As for the title match, the tournament lost Roland Garros runner-up Stefanos Tsitsipas this week following a family bereavement, but in the bottom half are Andrey Rublev, Gael Monfils, Karen Khachanov, and unseeded dangers such as qualifier Nikoloz Basilashvili, who beat Federer in his very first venture back into competition after more than year in Doha this year.

That year-plus absence, and only three events this year, was the result of Federer having double knee surgery, and his tentative return in Doha and Geneva did not, it must be said, set the world alight. He was pleased with this fourth-round run at Roland Garros, and rightly so, but two tough tests took their toll: He was sore and depleted.

But then Federer has made no secret of wanting to time his return to be ready for a good run at Wimbledon. So his performance in Halle, as it has always been, would be a vital part of the jigsaw.

His first match was against qualifier, the tall and powerful Ilya Ivashka, who had the measure and pace of the courts courtesy of those qualifying rounds. In contrast, Federer looked rusty, his timing off, and was unable to make any impression on the Belarusian’s serve.

Come the third game, and Federer faced two break points. He saved them, but by 3-2, he had yet to win a point on 12 Ivashka serves. By the time the Belarusian served at 5-5, he had still dropped only one point on serve, and was proving to be a big-hitting nut to crack in the very tricky conditions of the Halle centre court, criss-crossed by deep shadows.

It headed, though, to a tie-break, and Federer suddenly found his form to take a 6-1 lead. Even so, there was a slight waver, but the defending champion sealed it, 7-6(4), though with 14 errors to 12 winners.

The second set was more evenly balanced, with Federer finding more rhythm, greater accuracy, and making more impression on serve and at the front of the court.

However, Ivashka continued to serve well and did not face a break point until match-point at 4-5 in the second set. He survived, but Federer had the bit between his teeth and converted the last of three more chances in the 12th game, winning 7-5.

He admitted that there were improvements to be made:

“After two knee operations, a long break, and a difficult comeback, I hope to get into the tournament well…

“I missed it. I haven’t played a tournament in two years on this surface. I’ve done the hard courts, I’ve done the clay and now I’m on the grass. It’s been great being back here in Halle. I love playing here… I always feel good straight away on grass. I automatically have a good feeling.”

It is a message he has repeated both before the tournament and after his first match:

“I’m very, very happy to be back in one of my favourite tournaments. I always love coming back here. It’s a familiar venue, with so many wonderful memories.”

He explained that Halle is never an easy place to get off to a flying start, boasting as it does less pristine, even playing conditions than the world-famous turf of Queen’s:

“I struggled to get into the game. It was a bit of a cold start for me, with some nerves… but it just felt good despite the difficult match.

“Halle is extra difficult and extra dangerous. Here, the court is very protected by the roof, and I feel it plays faster. It’s always a tricky one… before you get used to it you [can be] in trouble.”

Asked what he expected of himself both in Halle and then Wimbledon, he hesitated:

“The goal is clearly to try and win here again. Wimbledon, I want to go deep, clearly that’s the goal… The goals are always high, they have to be high or I wouldn’t be playing .”

It is 22 years since Federer played his first Wimbledon match, a year after winning both the singles and doubles junior titles. Few who watched, back in what seems like a different era, could never have expected to see him still in the Wimbledon draw. That he still has ambitions at the most prestigious tournament of them all—and the work ethic to match—well, that is something to be treasured.