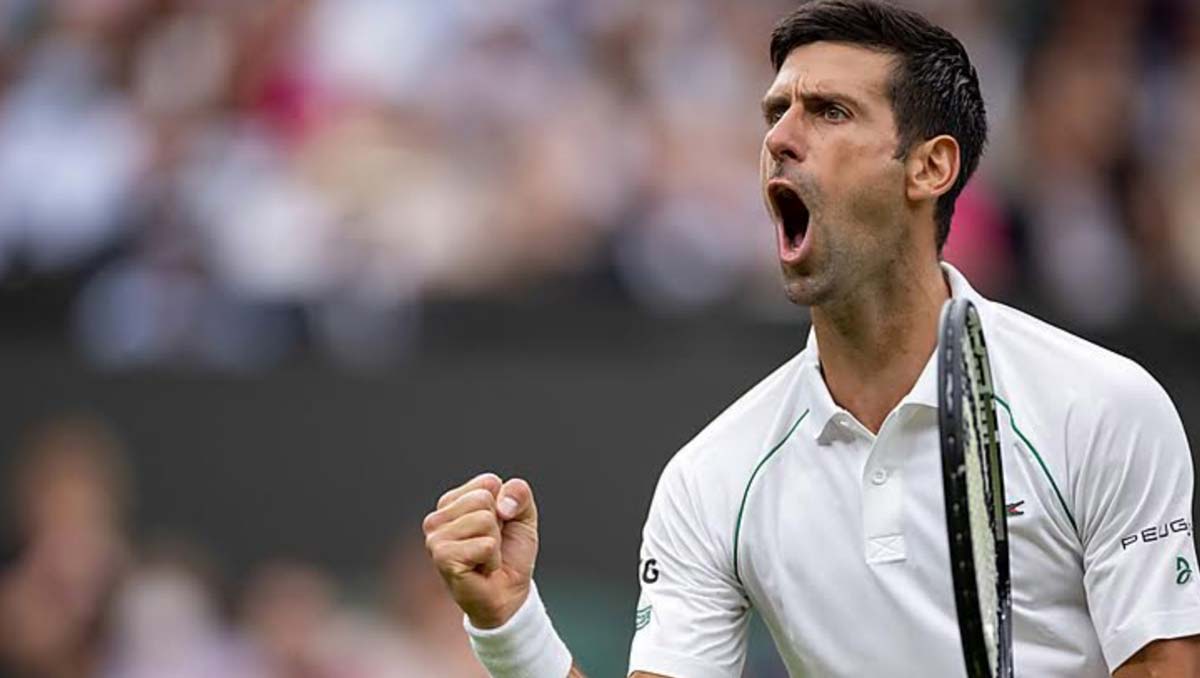 The first day’s tennis on Wimbledon’s famous lawns in two years brought with it something of an embarrassment of riches, especially for the home fans deprived of one their biggest sporting events in 2020.

At least it did if the traditional ingredient of the British weather did not get in the way.

On Centre Court alone, two of the six British men in the draw would be in action: the youngest, 19-year-old Jack Draper, would make his tournament debut against none other than the five-time champion—and the favourite to win his third in a row—Novak Djokovic. Nothing like jumping in at the deep end.

The closing match would bring Wimbledon’s favourite son, two-time champion and double Olympic gold winner, Andy Murray, back from a four-year absence following more injury problems and surgery than any man deserves. He may be ranked 119, here with a wild card, and have only two match-wins this season, but he would be cheered to the rafters as he embarked on his latest campaign against Munich and Doha champion, the No24 seed Nikoloz Basilashvili.

There was no shortage of British action on offer for the thousands who missed out on Centre Court tickets. Four more men, including No22 seed Dan Evans, plus five of the eight British women in the singles draw were scheduled to take to court. Among the latter was the ever-popular Heather Watson, a former mixed doubles champion and recent semi-finalist in Birmingham, making her 11th appearance at the All England Club.

The strong British contingent should have boasted three seeds for the first time since 1978: Evans, Cam Norrie, and Johanna Konta. But on the eve of the tournament, Konta was forced to pull out when one of her team tested Covid positive.

First and foremost, though, was the appearance of perhaps the hottest favourite for the title in many a year: Djokovic. For a start, a number of former Major champions were either missing or not yet back to their peak this year following long post-surgery absences.

Rafael Nadal, Dominic Thiem and Stan Wawrinka all withdrew, while Roger Federer and Murray were yet to strike gold following their return from surgery. But even with a full line-up, it was proving hard to see beyond the near-impregnable Serb.

Since beating Federer from two match-points down in the 2019 Wimbledon final, Djokovic had won three Majors from four finals—and only five Majors were played in that span due to the pandemic closedown. He picked up three more Masters to equal Nadal in a record tally of 36, but also became the only man to win all nine of the elite tournaments—and has now done so twice.

Since that Wimbledon final, he had also overtaken Federer’s record tally of weeks at No1, and should he win his sixth Wimbledon title, he would draw level with the record 20 Majors held by both Federer and Nadal.

Perhaps the biggest achievement in tennis is also now within touching distance. With the Australian and French Open titles already in the bag, Djokovic could go on to achieve something that neither of his great rivals has done. Only Rod Laver has won the calendar Grand Slam in the Open era, and Djokovic could become the second.

First things first, and it began with British teenager Draper, a young player full of ambition and talent. The left-hander reached the Wimbledon boy’s final in 2018, and made his main-tour debut as a wild card at Miami this year—though he retired in the first round with a back problem.

However, he impressed in his first appearance at Queen’s, beating Wimbledon’s No19 seed Jannik Sinner in two tie-breaks and then the 38-ranked Alexander Bublik.

But Djokovic had done his homework:

“I actually practised with Sinner yesterday so I asked him couple questions about Draper’s game. I know he’s a lefty. I’ve seen him practise today a little bit. I have to do my homework, speak to more players, watch some of the videos…

“It can be very dangerous, very tricky playing against a home favourite, someone that doesn’t have much to lose, a guy who has beaten some really good players last week in Queen’s. I’m taking him very seriously.”

As if that was not enough, there was the Djokovic focus, sense of purpose, and eye on the prize:

“The level of confidence is pretty high. Obviously winning the two Majors this year, playing very well in Roland Garros. That tournament took a lot out of me mentally and physically and emotionally. It also granted me an incredible amount of positive energy and confidence that created a wave that I’m trying to ride.”

Draper, a strapping 6ft 3ins and with a certain swagger, enjoyed enormous support from a near capacity Centre Court from the very first point. And he deserved it, surviving break point in the second game, breaking in the next, and ultimately saving six more break points on the way to serving out the first set, 6-4.

The court was greasy—as Djokovic had anticipated in his pre-tournament press—and both men tumbled along the way. But the world No1 was galvanized into action in the second, racing to a double break and serving out the set, 6-1. Credit to Draper: He had made only two unforced errors in the set, but Djokovic had upped the attack with 15 winners.

And so it went, with Djokovic on a roll, and Draper unable to resist his increasingly fine serving. The Serb would hit 25 aces, win 17 points at the net, and ended with 47 winners to 24 errors.

With two more sets on the board, 6-2, 6-2, two breaks in each, Djokovic was done in a tidy two hours, but he had generous words for Draper, who left court to huge support:

“He definitely deserves a round of applause. A youngster, I think, only 19, walking onto the Centre Court for the first time, I think he has done extremely well. He deserves credit… He carried himself very maturely on the court, he behaved well, he backed himself.”

If there was one man among the young wave in the top 10—and there are five age 25 and under—expected to give Djokovic some trouble at Wimbledon, it was No3 seed Stefanos Tsitsipas, the single-handed Greek with an all court game and impressive array of skills apparently designed for grass. He reached the semis in Australia, won his first Masters in Monte-Carlo and very nearly got the better of Djokovic in the French Open final.

But his opening match always looked a difficult one against Frances Tiafoe, and so it proved. The American did not drop serve on the way to a 6-4, 6-4, 6-3 win that drew a standing ovation from the Court 1 crowd.

Tsitsipas admitted that he should have fitted in a grass event before Wimbledon—but then he had played more matches this year than anyone else, and that French Open final, played just after the death of his grandmother, was emotionally as well as physically exhausting. But take nothing away from Tiafoe: he played an aggressive and confident match, and came out the deserved winner.

The highest seeded Briton in the singles draws, though, was Evans, and he took on veteran Wimbledon player Feliciano Lopez in a superb line-up on Court 2. However, as the hours ticked by in the rain, it became inevitable that it would be cancelled. Harriet Dart’s match went the same way.

But just before 4pm, three British women did take to court, though for some it was short-live. The 22-year-old qualifier Katie Swan, ranked 290 in the world and working back from a season of injuries, took on No23 seed Madison Keys on Court 3. The difference in experience—and Keys has made at least the semis in four Majors—told immediately, and one break is all that was needed for the first set, 6-3. Keys finished the job in the second 6-4, after just an hour and a quarter.

It was an even quicker story for Jodie Burrage, making her Wimbledon debut, who lost to Lauren Davis, 6-2, 6-1, in under an hour.

So could Katie Boutler, who reached a high of 82 before the coronavirus lockdown, reach the second round for the second time against qualifier Danielle Lao? She lost a close tie-breaker in the first set, but hit back to level, 6-3. Lao then broke in the fourth game of the third but Boulter dug in and broke straight back and for good measure broke again to serve for the match. A fine service hold, and she was into the second round.

Things get considerably harder now, though: Boulter faces one of the toughest tests in the draw, the No2 seed Aryna Sabalenka.