Barty beats Suarez Navarro, but retiring Spaniard admits: “I think now, today I am the most happy player on tournament.” 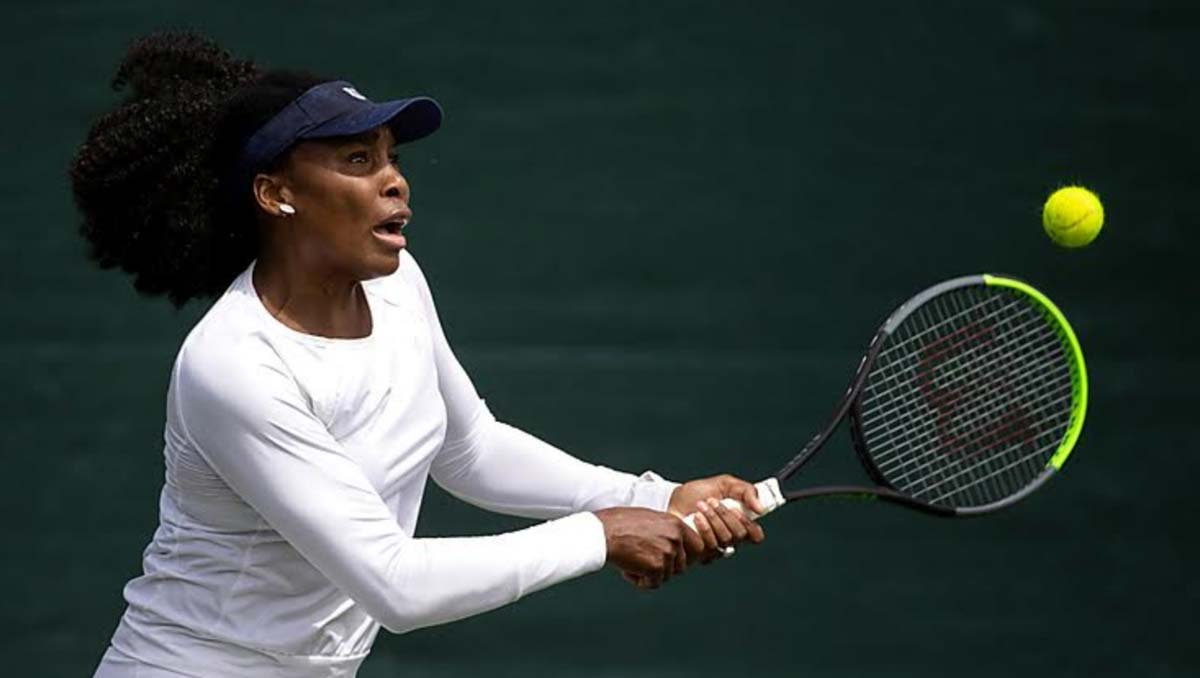 It was all going so well, with every court around the grounds in full swing, even Centre and No1 courts.

Then all at once, the red flags went up on the scoreboards: Suspended. Sure enough, the rain had made an unwelcome appearance, though not before the highest British seed in the singles draw, Dan Evans, had come through a fine match in two hours on an enthusiastic Court 2.

There, he took on one of the oldest men in the tournament, the 39-year-old Feliciano Lopez. The remarkable Spaniard had not missed a Major since the 2002 French Open, totting up a record 77 consecutive Major appearances, and continued to close on the record of fellow 39-year-old Federer—a total of 81 Major appearances.

Lopez was also a three-time Wimbledon quarter-finalist, entirely at home on grass, and while he may no longer be in his prime, he beat Karen Khachanov in the second round in Mallorca last week to score his 500th tour-level win.

He took on fellow single-hander Evans, a man who has taken real strides in the last couple of years to improve his fitness and attitude. His reward was a career-first title at the start of the year, a first Masters semi-final, and a career-high ranking of 26.

Like Lopez, Evans plays old-school grass tennis, with swinging serves, lots of net attack, aggressive tactics. But while the veteran Spaniard might have had the bigger serve, he did not have Evans’ speed and footwork.

Evans put on a strong and confident display, edging a tight first set in the tie-break, 7-6(4), and asserting himself in the second with two breaks of serve. He had to work harder in the third, and Lopez worked a couple of break chances, but Evans’ solid serving—and he won a creditable 54 of 61 first serves—kept him in control, and he broke just as it looked like another tiebreak, to win, 7-5, in two hours.

The other 39-year-old man, Roger Federer, would play a few hours later, and on paper was the favourite against Adrian Mannarino, though the Frenchman was an adept grass player and Federer’s comeback from knee surgery has been rather longer and slower than he had hoped.

However, one tall, strong figure in the women’s draw took the accolades for longevity: the 41-year-old Venus Williams.

The five-time Wimbledon champion played her first draw here in 1997, reached the quarters in the two following years, and won in 2000. She would reach the next three finals, too, winning in 2001 and again in 2005, and reasserted her grass dominance with two wins from three finals in 2007 to 2009. Indeed had it not been for another astonishing player, her sister Serena, Venus may have won a few more: it was Serena who beat her in three of her four losing finals.

Now the former No1 was back, ranked 112, and making a record 23rd appearance at Wimbledon—her record 90th Major appearance, and playing another 30-something in Mihaela Buzarnescu. It was not a bad draw, given that the Romanian had played and won as few matches this season as Williams.

It took the veteran American almost an hour to edge to the first set, 7-5, saving five break points along the way, but then Buzarnescu did convert one of another five break chances early in the second set, and that was enough to level things, 6-4. Williams hit back with some more aggressive strikes in the third, notching up 11 winners to take the win—her 90th at Wimbledon—6-3.

She beamed, and twirled, and moved on to the second round against the No21 seed Ons Jabeur—which will be an altogether tougher test. But one question raised a smile on the Williams face in her post-match press. Asked about how she sees her future, she laughed:

“What’s my future? I don’t think anyone’s asked me that in a while. My future will be on tomorrow when I play another match. That is exactly what it is. I’m also in the mixed doubles, so I’m looking forward to that. So on, so forth and what have you…”

That doubles match? Well it raised a few eyebrows when it was announced: Nick Kyrgios, a firebrand, a rebellious player, 26 years old, and without a match in singles or doubles since the Australian Open.

Another former Wimbledon finalist and former world No2 was also making some moves back at Wimbledon after a career littered with injuries and shoulder surgery almost eight years ago. Vera Zvonareva, now age 36, made two Major finals in 2010, but between 2013 and 2018, during which time she had a daughter, played barely a handful of Majors, and had only recently returned to the top 100 in singles.

She had not won a match at Wimbledon since 2014, but that was about to change. She scored a straight-sets win over the 22-year-old Marie Bouzkova, 7-5, 6-4. Her reward? The No7 seed and last year’s French Open champion, Iga Swiatek.

The 2018 champion Angelique Kerber, age 33, had little trouble in beating the 86-ranked Nina Stojanovic, 6-4, 6-3, after arriving here with the grass title in Bad Homburg.

But the final word, on this day of celebrating an older generation still making hay on London’s grass, goes to Carla Suárez Navarro, who at 32 is playing her retirement season after recovering from a successful treatment for Hodgkin’s lymphoma.

It was an emotional occasion, played against the world No1 Ash Barty, and the Spaniard, one of the most liked women on the tour, has a game suited to these grassy environs: a delightful single-handed backhand that delivers great angle, slice and touch.

That was enough to give the equally deft tennis of Barty a run for her money, for after winning the opener, 6-1, Suarez Navarro edged a close second set in a tie-break, 7-6(1). Barty, in the end, was far too much of a handful, and took the win, 6-1, but the plaudits went to the Spaniard, as Barty directed the applause to her opponent. The Australian said afterwards:

“I just said to her, it was a pleasure to share the court with you. She’s an exceptional person, a great fighter, a great competitor, and very well-loved and respected in the locker room. She’s going to be sorely missed. I wanted to give her the appreciation that she thoroughly deserves. The crowd was exceptional. They gave her a remarkable reception as well.”

Suarez Navarro bid farewell to Wimbledon for the last time with:

“I think Wimbledon made me a really good gift. I really enjoy. I cannot ask for anything else better than this day. As you say, one of my last match here against Ash, No1 of the world, Centre Court…was amazing. I really enjoy everything I pass through. I think now, today, I was or I am the most happy player on tournament.”

And she gave an awful lot of joy to tennis fans on her last day in SW19.