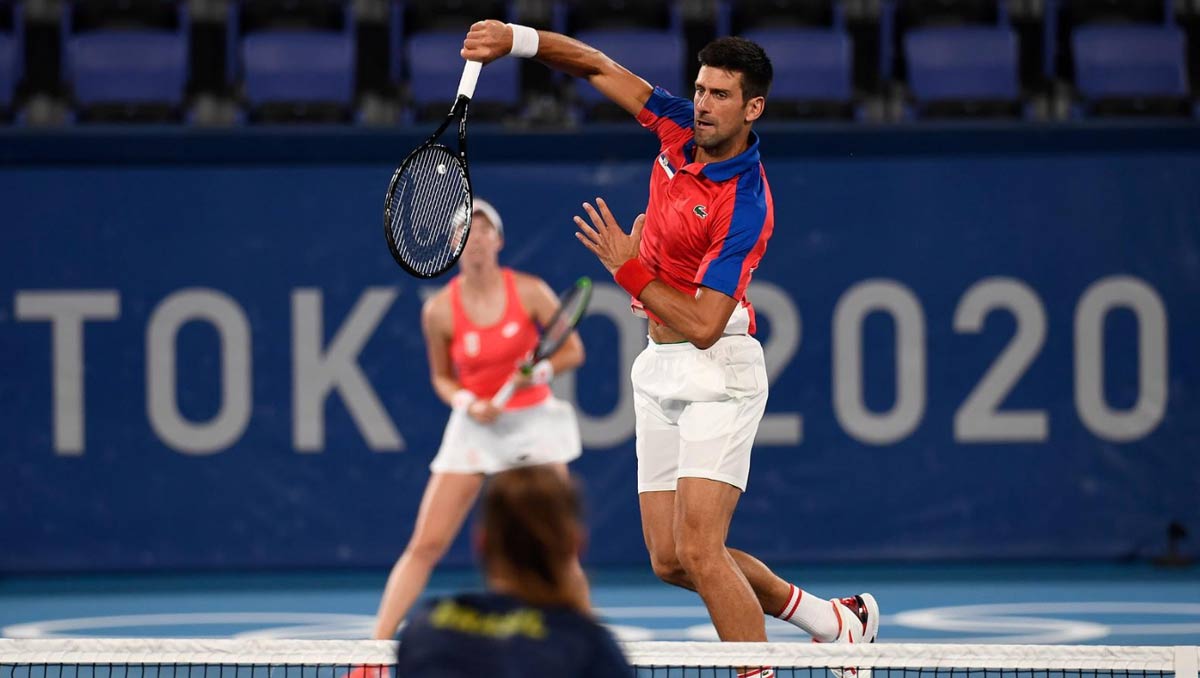 Novak Djokovic doled out a hammer blow to Japan’s hopes in the men’s singles with a 6-2, 6-0 defeat of Kei Nishikori.

It took the Serb superstar on to the semi-finals in Tokyo’s Ariake Stadium—one impressive step closer to his ultimate goal, a gold medal to add to his three Major titles this year.

Should he go on to win gold—and he was hot favourite to do so even before the draw was made—and then win the US Open, he will match just one other person in the tennis record books. Steffi Graf is the only player ever to win the Calendar Golden Slam.

Djokovic was in ruthless form over the former world No4, taking just a few minutes over the hour to reach the semis—and then also reached the semis of the mixed doubles with Nina Stojanovic in a scant 70 minutes.

The world No1 was one of three winners who advanced in little more than hour in the slightly shadier conditions in Tokyo, after the organisers bowed to pressure and moved the start time to 3pm to avoid the hottest part of the sultry Japanese sun.

Djokovic’s opponent in the semis will be No4 seed Alexander Zverev, his first top-30 ranked opponent. And the young German has got to the semis without playing any seeds, and meeting not a player inside the top 40. His latest win, in just 66 minutes, was at the expense of Jeremy Chardy, 6-4 6-1.

Based on their recent encounters, it is hard to Zverev stopping Djokovic, who has won six of their last seven matches, and all five dating back to the ATP Finals in 2018.

In the bottom half, perhaps the most likely man to press Djokovic in the final medal match was world No2 Daniil Medvedev, but the Russian has struggled with the conditions all week, and had played most his matches in the peak heat of the day. He continued to swelter in the humidity to lose to No6 seed Pablo Carreno Busta, 6-2, 7-6(5), in an hour and three-quarters.

The remaining semi will therefore feature the Spaniard against No12 seed Karen Khachanov, who beat Ugo Humbert, 7-6(4), 4-6, 6-3.

But if Djokovic has stood out in reaching two semi-finals in Tokyo, the young Swiss Belinda Bencic has made even more of a splash—by reaching two finals. First, she edged No15 seed Elena Rybakina, 7-6(2), 4-6, 6-3, in singles, in a match lasting almost three hours. She then returned with partner Viktorija Golubic to reach the women’s doubles final by beating the Brazilian duo, Laura Pigossi and Luisa Stefani, 7-5, 6-3.

It makes Bencic just the fifth player to reach finals in both singles and doubles at the Olympics since tennis was reintroduced 1988, and she is in impressive company: Andy Murray, the Williams sisters, and Nicolas Massu.

The Swiss has been in outstanding form and impressive physical shape: She needed three sets to beat current Roland Garros champion Barbora Krejcikova, another three to beat the Roland Garros runner-up Anastasia Pavlyuchenkova, and three more to beat Rybakina.

She will next play another woman, in Marketa Vondrousova, who has shown terrific form in Tokyo. Two years younger than Bencic, at 22, the Czech only made the draw courtesy of a protected ranking, but has proved her mettle with wins over No16 seed Kiki Bertens, world No2 and home favourite Naomi Osaka, and then the highest ranked woman left in the draw, No4 Elina Svitolina, who she beat, 6-3, 6-1, in an hour.

What is more, Vondrousova beat Bencic in their only previous meeting, on the hard courts of Miami this March—though it was a tough three setter.

The two women will at least get a day’s rest before the finals, with the Friday schedule opening at 3pm with the men’s semis, first Khachanov/Carreno Busta, followed by Djokovic/Zverev, with Djokovic the third match on Court 1 in mixed doubles.