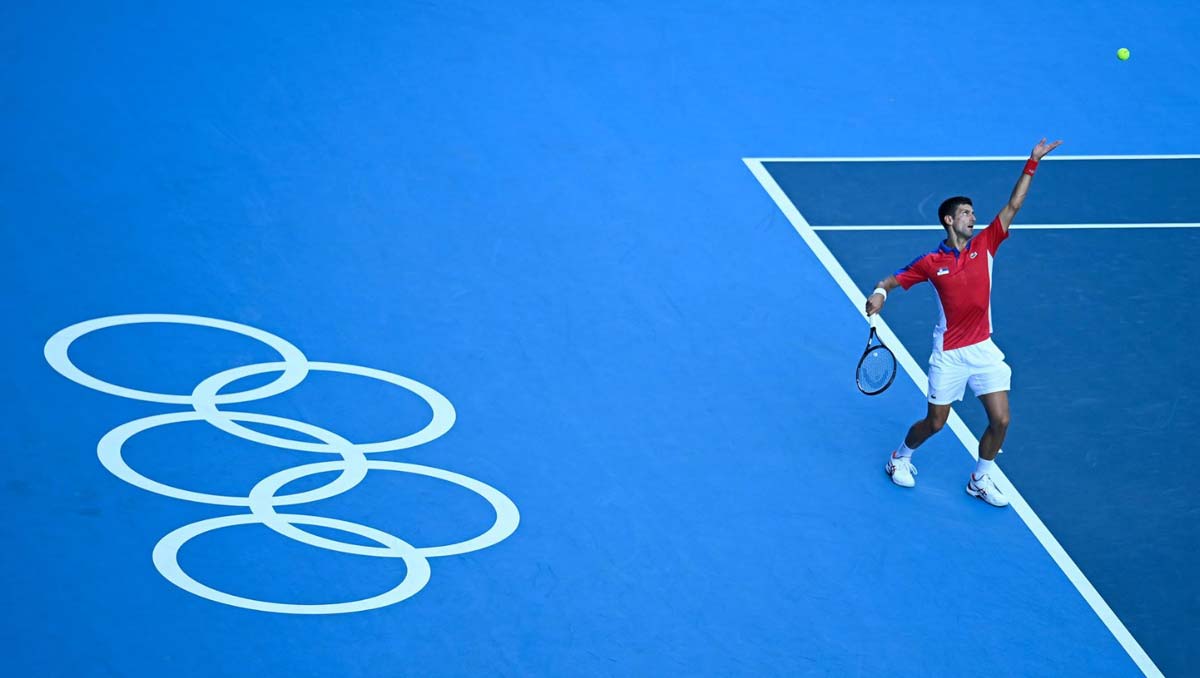 Novak Djokovic, who has been front and centre in social media streams at the Tokyo Olympic Village, passed his first test on the road to the one missing accolade in his trophy cabinet: Olympic gold.

Having already achieved his second career Grand Slam this year with the Roland Garros title, and standing just one Major away from the calendar Grand Slam—he needs only the US Open to complete that special set—he could become the only male player ever to achieve the calendar Golden Slam with the singles gold medal in a week’s time.

In truth, his opening round was a nice warm-up for the tougher matches that lie ahead, in the shape of 139-ranked Hugo Dellien. The world No1 cruised through in little more than an hour, 6-2, 6-2, to set a meeting with Jan-Lennard Struff, ranked 48. The German has won just one set in his five defeats by the Serb.

Djokovic’s quarter could later produce the recently-married Gael Monfils, who is drawn to face Andrey Rublev unless Japan’s favourite son, unseeded Kei Nishikori, puts him out in a difficult first-round contest.

Head to the quarters, and the big guns are Hubert Hurkacz or Aslan Karatsev, who share a quarter with Alexander Zverev.

The biggest seed in the bottom half is world No2 Daniil Medvedev, who had to work rather harder to advance to Round 2 against Alexander Bublik, ranked 40 in the world. The Russian, who has beaten Djokovic in three of their last five matches, beat Bublik, 6-4, 7-6(8).

Also through in a heavyweight half, where the unseeded defending champion Andy Murray sits, as well as unseeded Marin Cilic, were No14 seed Ugo Humbert, No15 seed Fabio Fognini, and No6 seed Pablo Carreno Busta.

Krejcikova was leading 5-2 in the opening set when Zarina Diyas was forced to retire with a leg injury. The Czech will next face the fast-rising Canadian teenage star, Leylah Fernandez, who beat Dayana Yastremska 6-3, 3-6, 6-0, in her first Olympics.

Swiatek, who is also making her Olympic debut, beat Mona Barthel 6-2, 6-2, and will next play Paula Badosa. But looming in the quarters is the face of the Tokyo Olympics, the No2 seed Naomi Osaka, who enjoyed the honour of lighting the Olympic flame in yesterday’s opening ceremony.

Osaka, the reigning US and Australian Open champion, became the first ever tennis player to light the Olympic flame, having completed the final leg of the Olympic relay.

She ascended the stairs of an illuminated representation of Mount Fuji to ignite the flame, and afterwards admitted:

“Undoubtedly the greatest athletic achievement and honour I will ever have in my life… I have no words to describe the feelings I have right now but I do know I am currently filled with gratefulness and thankfulness.”

Osaka’s first scheduled seed, Kiki Bertens, who had been struggling with injury, was the first seed to lose, but many of the other star names—and a lot of them feature in top-seed Ash Barty’s half—are yet to begin.

World No1 Barty will open against the dangerous Sara Sorribes Tormo, in a quarter containing Anastasia Pavlyuchenkova, Belinda Bencic and Krejcikova. Then the semis could produce Garbine Muguruza, Petra Kvitova, or Aryna Sabalenka.

Barty is first on Centre Court on Sunday, followed by Osaka, then Murray against Felix Auger-Alisassime. No3 seed Stefanos Tsitsipas closes proceedings in an tricky opener against Philipp Kohlschreiber.