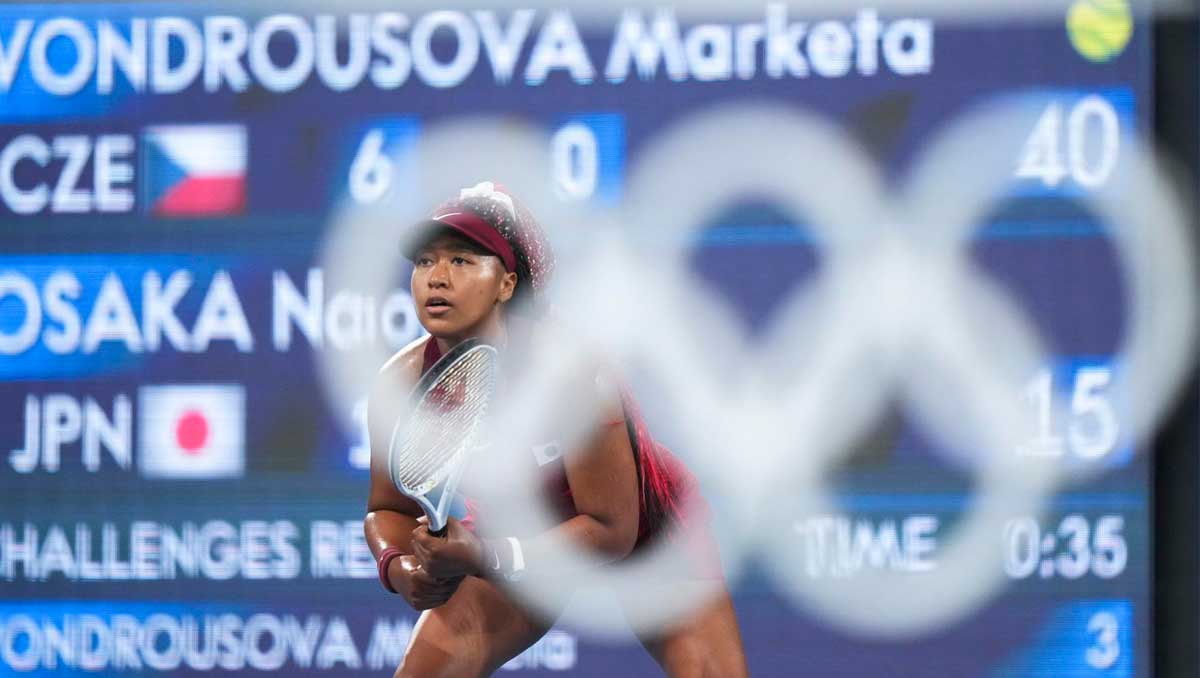 And still the big names continued to fall at the Ariake Tennis Arena in Tokyo, but few of them as big as the face of the Olympics, the No2 seed Naomi Osaka.

The Japanese super-star was roundly beaten by the young Czech Marketa Vondrousova, 6-1, 6-4 to fall short of the quarter-finals in her debut Olympic appearance. The talented 22-year-old took a 4-0 lead at the start of the match before Osaka got on the board, but then went down an early break in the second.

However, world No42 Vondrousova battled back to level things, and broke again to seal a famous win and a quarter-final against another unseeded player, the 29-ranked Paula Badosa—who herself was responsible for the exit of Iga Swiatek earlier this week.

Osaka’s loss means that the three top seeds were all out of contention by the third round, with Ash Barty losing her opening match, and No3 seed Aryna Sabalenka losing in Round 2.

They were soon joined by one of the fastest improving players of the season, the French Open champion, No8 seed Barbora Krejcikova, who was beaten by Belinda Bencic, 1-6, 6-2, 6-3. It was just the second loss for Krejcikova in her past 24 matches.

Bencic will now play the formidable No13 seed, Anastasia Pavlyuchenkova, who beat Spaniard Sara Sorribes Tormo 6-1, 6-3. The Russian, whose fresh run of form took her to a first Major final at Roland Garros two months ago, has made serene and seamless progress, dropping only seven games in three matches.

Also in this half, the only remaining Major champion in the draw, No7 seed Garbiñe Muguruza, came through Alison van Uytvanck, 6-4, 6-1, and like Pavlyuchenkova, has also yet to drop a set. Muguruza will now play the No15 seed, Elena Rybakina, who ended the run of Donna Vekic, 7-6(3), 6-4.

However, it is the newly-wed Elina Svitolina who is the highest remaining seed, at No4, but also the only remaining seed among the four women in the bottom half of the draw. However, she has taken the hard route to the quarters, having now played nine sets in her three matches: Her latest marathon put out No14 seed Maria Sakkari, 5-7, 6-3, 6-4, after two hours 38 minutes.

Svitolina will next play world No61 Camila Giorgi, who caused another upset on rain-disrupted day in Tokyo. The Italian beat the Wimbledon runner-up and No5 seed, Karolina Pliskova, 6-4, 6-2.

There were fewer upsets in the remaining third-round men’s matches, though the only loss—of No7 seed Hubert Hurkacz—continued what is proving to be a memorable story for the only Briton to get beyond the first round in either singles draw.

Andy Murray pulled out with a thigh problem before playing his opener against Felix Auger-Aliassime—though he has made up for it by reaching the quarters in doubles with the impressive Joe Salisbury—and Heather Watson lost her opener.

Liam Broady, though, ranked 143, and picking up a slot in the draw after Dan Evans was forced to withdraw due to Covid infection, proved he was here to make an impression. He beat the Wimbledon semi-finalist, 7-5, 3-6, 6-3, to reach the third round, and score his first victory over a top-20 player.

He will now face the 68-ranked Jeremy Chardy, who also caused something of an upset against the in-form Russian, No11 seed Aslan Karatsev, 7-5, 4-6, 6-3. So only one seed remains in their quarter, No4 Alexander Zverev, who will play Nikoloz Basilashvili for a quarter-final place.

This top half, headed by No1 Novak Djokovic, also finds the unseeded Kei Nishikori, a former Major runner-up and top-four player blighted by injury problems in the last couple of years. But it is in his home country that the Japanese star has regained some of his old form, first putting out No5 seed Andrey Rublev, and reaching the third round via Marcos Giron, 7-6(5), 3-6, 6-1.

Nishikori won the bronze medal in singles in Rio in 2016, and will feel confident of reaching the quarters in Tokyo when he takes on Ilya Ivashka, who beat Mikhail Kukushkin, 6-7(4), 6-3, 6-3.

The bottom half, however, continues to boast a strong line-up, with just one man unseeded: No59 Dominik Koepfer. For this half still offers the prospect of a semi showdown between No2 Daniil Medvedev and No3 Stefanos Tsitsipas, who scored an important win to reach the third round via the man who put him out of the first round of Wimbledon, Frances Tiafoe. The charismatic Greek, playing his first Olympics, beat the American, 6-3, 6-4.

He will next play No14 seed Ugo Humbert, who beat Miomir Kecmanovic, 4-6, 7-6(5), 7-5. Come the quarters, and the winner will face either No8 seed Diego Schwartzman or No12 seed Karen Khachanov.