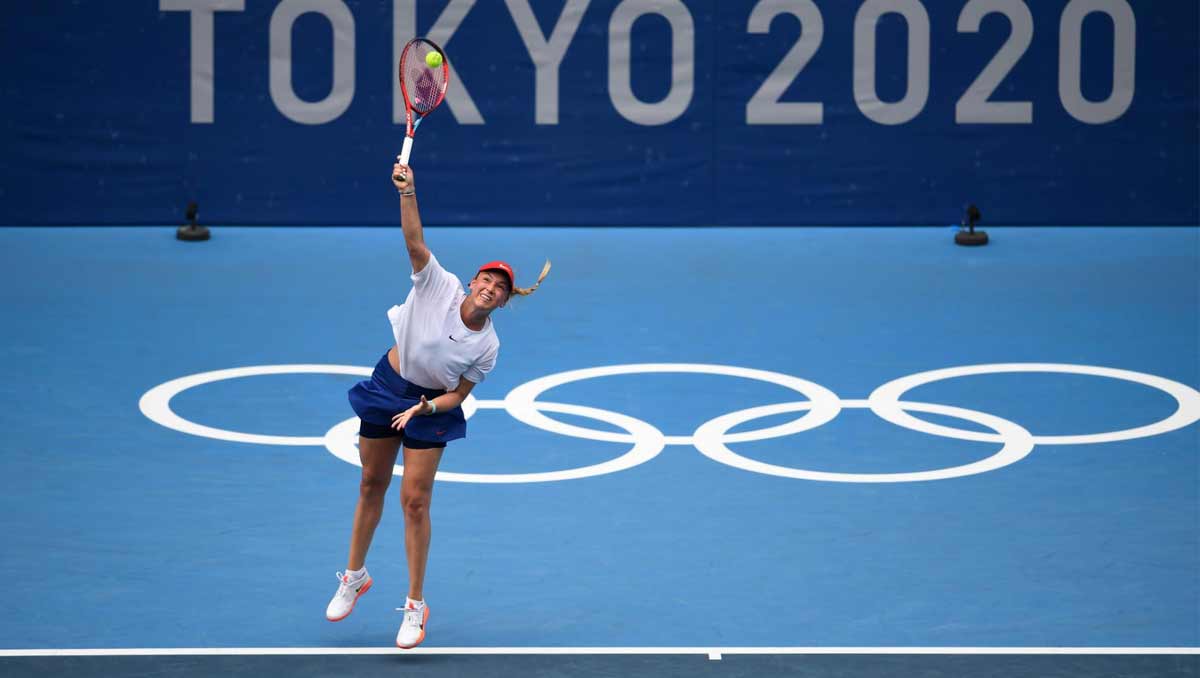 Things may have gone according to rankings in the men’s singles matches played on Day 3 in Tokyo—though there were only eight of them—but the same could not be said of the women’s draw.

Where the two top seeds Novak Djokovic and Daniil Medvedev, along with No4 seed Alexander Zverev, cruised to the third round, an already-upset women’s draw that had seen world No1 Ash Barty among the four seeds to lose in their openers, then watched a trio of Olympic hopefuls knocked out in the second round.

Two Major champions, No6 seed Iga Swiatek and No10 Petra Kvitova, were joined by world No3 Aryna Sabalenka in much earlier-than-expected losses.

Paula Badosa, ranked 29, put out Swiatek, 6-3, 7-6(4), leaving the young Pole in tears on the court for several minutes after the match was done and dusted. Badosa will now play a fellow non-seed, Nadia Podoroska.

Alison van Uytvanck, ranked 59 following knee surgery in February, came from a set down to beat Kvitova, 5-7, 6-3, 6-0, winning the last 10 games on the bounce. It was the Belgian’s first win over a top-20 player in over three years, when she beat defending champion Garbiñe Muguruza at Wimbledon in 2018. Van Uytvanck will have to play the No7 seeded Spaniard in the next round.

Donna Vekic overcame one of the favourites for the title, Sabalenka, along with the heat and humidity, in her second marathon effort this week. Having beaten Caroline Garcia in a little under three hours in Round 1, Vekic needed over two and a half hours to beat the Belarusian from a break down in the third set, 6-4, 3-6, 7-6(3), and will now face No15 seed, Elena Rybakina, for a place in the quarter-finals.

Like van Uytvanck, Vekic has also slipped in the ranks, to 50, following knee surgery earlier this year. But while both women are in the half vacated by Barty, there remain some tough contenders here. As well as Muguruza and Rybakina, the other quarter still boasts French Open champion Barbora Krejcikova, and the Roland Garros runner-up, Anastasia Pavlyuchenkova, plus No9 seed Belinda Bencic.

In the bottom half, Osaka continued her serene progress with victory over Viktorija Golubic, and will next play Marketa Vondrousova, who beat Marketa Buzarnescu 6-1, 6-2.

The other bottom quarter, topped by No4 seed Elina Svitolina, remains an intriguing section, with Svitolina scheduled to take on No5 seed Karolina Pliskova in the quarters. But the newly-wed Svitolina had to work hard for the second consecutive match.

After winning the longest match of the tournament against Laura Siegemund in the opening round, she came from 6-4, 3-1 down to beat Ajla Tomljanovic, 4-6, 6-3, 6-4. And she is likely to face another long test in the next round against the No14 seed, Maria Sakkari.

Pliskova ended the emotional run of Carla Suárez Navarro, who is playing after her recovery from cancer last autumn and retires from tennis this season. The tall Czech, runner-up at Wimbledon, won 6-3, 6-7(0), 6-1, and will next play Camila Giorgi.

On the men’s side, Djokovic remained on course for the ultimate tennis goal, the Golden Calendar Slam, with another dominant win, this time over Jan-Lennard Struff, 6-4, 6-3, and will next play the only remaining seed in his quarter, Alejandro Davidovich Fokina, who beat John Millman, 6-4, 6-7(4), 6-3.

In the bottom quarter, Medvedev set a meeting with No15 seed Fabio Fognini, while the next biggest seed in his quarter, No6 Pablo Carreno Busta, also advanced for a meeting against the unseeded Dominik Koepfer.