After beating Pliskova in seesawing three sets, Barty said: “I hope I made her proud” 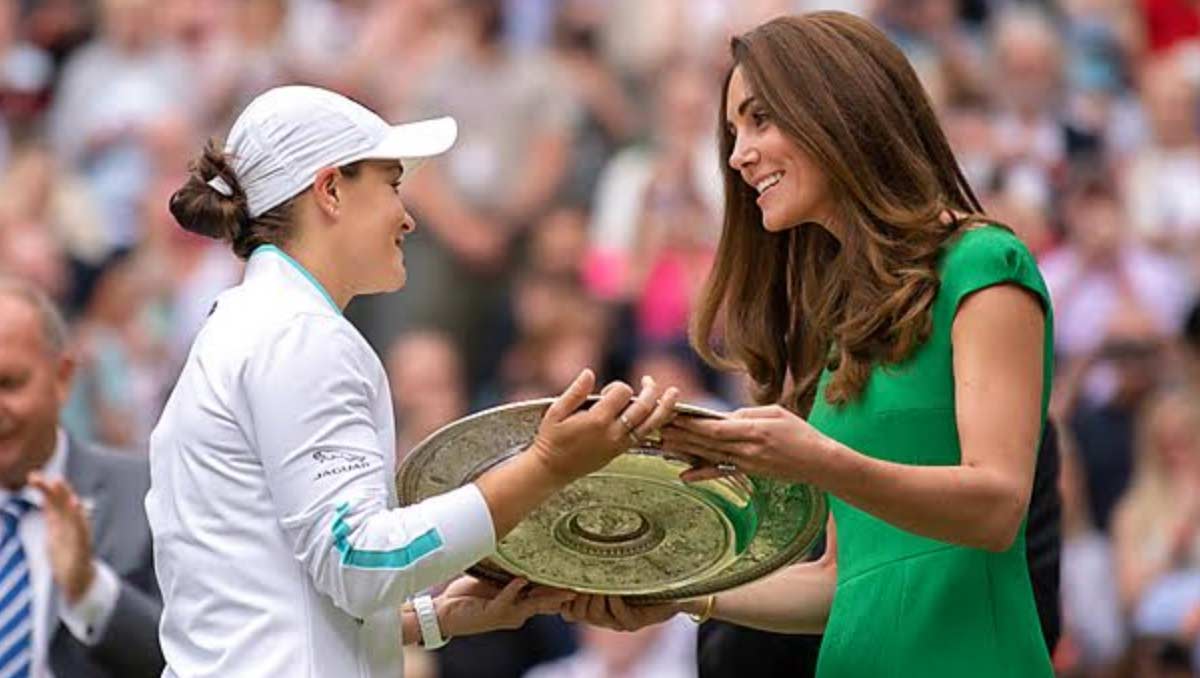 The 128 had become two, and while previous Wimbledon champions fell out of contention, and all but one previous Major champion went the same way, there was no denying that cream has risen to the top for this emotional final.

Yes, there were tears when the most crowned champion Serena Williams was forced out prematurely, denied yet again of that record-equalling 24th Major title. At almost 40 years old, there was the fear that this may be the last time.

Great Wimbledon champions such as Petra Kvitova, Venus Williams and Garbine Muguruza were all gone in the first week.

Young pretenders to the Wimbledon throne, who had won other Majors but never this one—former junior champion Iga Swiatek, plus Bianca Andreescu and Sofia Kenin—were among the early departures, along with the newest champion, Barbora Krejcikova.

Some bright new names lit up the second week, taking some of those champions in their stride: Ons Jabeur and Aryna Sabalenka were embraced by the Wimbledon crowds and will make their mark again on a surface that fitted them like a glove.

But in the final analysis, it was one of the favourites for the title all along, world No1 Ash Barty, plus a former No1 who had already come within touching distance of tennis silverware with her run to the US Open final in 2016, Karolina Pliskova, who took to court in a battle of huge contrasts.

And while their styles were very different, each brought ideal qualities to the London turf. Pliskova had three grass titles to her name from Eastbourne and Nottingham. The Czech’s height, serving prowess, strength from the baseline, use of geometry, made her formidable. It was no accident, too, that she had been in the top 10 for more than four straight years, slipping to 13 just before Wimbledon. She would be back up to No7 with her run this week, after finally sealing her complete set of Major quarter-finals.

However, Barty’s deft and varied skills, tactical smartness, ability to turn defensive slice into swift forehand attack, with drop-shots and changes of direction part of the package, could undermine everything thrown at her unless it was near perfect. That she had been a great doubles player—a Major champion—before rising the singles ranks to No1 only made her game the more complete.

Perhaps there was one more element weighing in the Australian’s favour: that it was 50 years ago that Evonne Goolagong Cawley, a trailblazer for her nation and now an inspiration to Barty, won the first of her two Wimbledon titles.

That was the task ahead for these two quiet, undemonstrative players as they attempted to fulfil their dreams.

It was a tough start for Pliskova, with 14 points to Barty before the Czech even got on the board. Nerves were clearly a factor, as was Barty’s tennis. Pliskova was into the fourth game, and serving, before picking up a point, and she got a roar of encouragement from the crowd, but she got only one more point before a second break, courtesy of double fault, for 4-0.

But all at once, Barty made a run of errors, and Pliskova got a break back to love, and was on the board. Not that Barty eased off: she broke again for 5-1 and a chance to serve it out.

Now Barty looked nervous, too, double faulted, and saw a bullet of a forehand flash past her on break point, 5-2, and Pliskova’s serve began to iron itself out for a love hold. Barty would once again have a chance to serve it out, and this time she held for the set, 6-3.

Among these seesawing emotions and tennis, could Pliskova now manage to keep things on an even keel? She had managed just two winners to 12 from Barty, and not a single ace. She did manage to hold her opening serve, but then another string of errors gave Barty a break, as the Aussie found an easy rhythm in their forehand cross-court exchanges.

Gradually, though, the Czech was finding some range and confidence, and after a couple of holds of serve, she produced two winning forehand returns to break Barty and level at 3-3. The crowd now began to appreciate the clean baseline striking of Pliskova, the kind of hitting that forced Barty back and out of her comfort zone, as it had against Sabalenka in the semis. Pliskova held to love, and raised her fist to her box. Was this a turning point?

She held to love again, 5-4, drawn into a couple of long rallies by Barty. Pliskova was forced into more unforced errors, and bent double in despair as it brought up break point. Barty sliced and diced her opponent to draw one more error, and would serve for the match.

Yet neither player was able to find a solid stretch of strong play, and it resulted in another break by Pliskova: It would go to a tie-break.

And there, the match-winning qualities that got the Czech this far surfaced, and Pliskova raced to 6-2 lead via a great rally of net-clips, lob and smash. She raised her fist and the Centre Court roared, before a double fault from Barty conceded the set, 7-6(4).

Barty had to work hard to hold the first game of the third, with both playing well at the same time, but then she broke, and held for 3-0. Whether this would be decisive depended on Pliskova’s determination to up her attack and go for her shots. She did just that to hold with a scorching forehand winner.

They edged towards the conclusion, Barty holding through a tricky game for 5-2, and the fans were treated to the best rally of the match, a deft net exchange that drew a rare smile from Pliskova. Indeed it was one of the Czech’s best games in the match, with two high backhand volley winners. But it would be Barty who served for the match—Pliskova’s last chance to stay alive. And the Czech did work break point, but it vanished in a puff of Barty brilliance. The Aussie aced for match point, and a final netted backhand from the Czech handed Barty her dream win.

Now, the calm and collected Barty let the emotions out: She knelt and cried. And come the presentation ceremony, the equally calm and collected Pliskova also wept, saying: “Thank you so much to everyone here today, I enjoyed every minute of playing on this court… I never cry, never, and now…”

She paused, and prompted by Sue Barker, remembered to finish: “I want to thank all my team. All the success goes to them, without them I would not be here, and my family of course. No matter which trophy I have, we have an incredible three weeks here.”

Barty, now back into ‘business-like’ mode, gave her thanks, described her emotions, congratulated her opponent, but asked about one particular person back home, Goolagong Cawley, the tears surfaced again: “I hope I made her proud.”

Barty is the first Australian to lift the Venus Rosewater Dish since her idol/mentor in 1980. But Goolagong Cawley’s first was in 1971—a golden anniversary indeed.