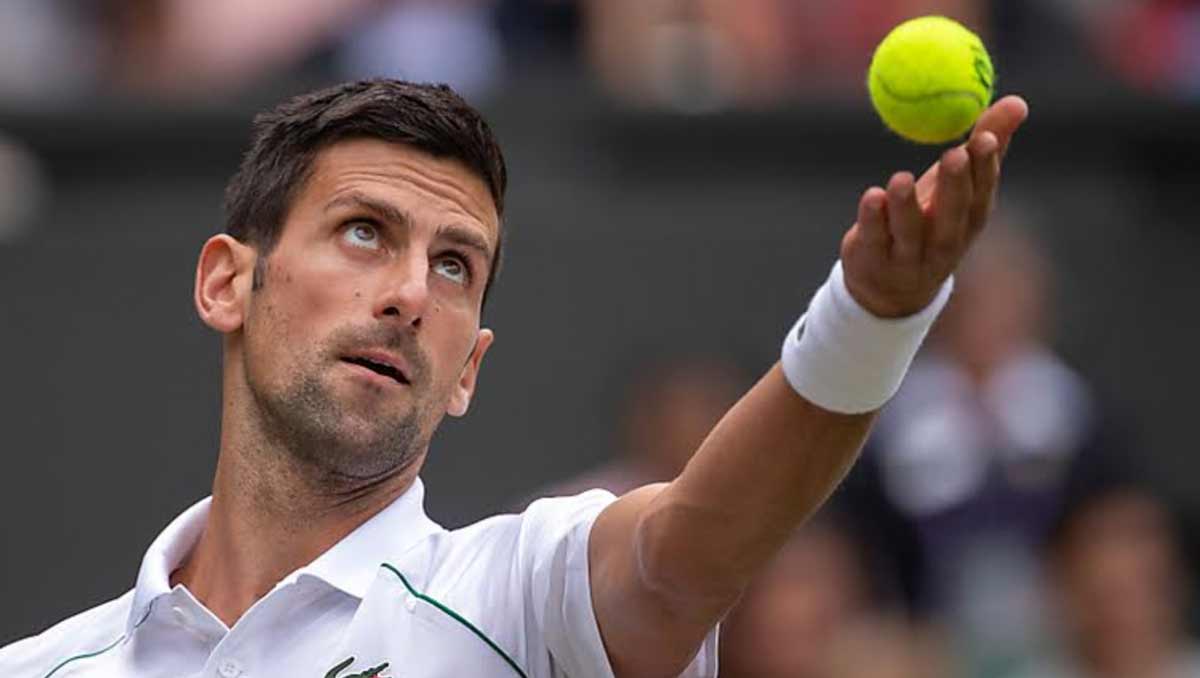 Down to the last eight, then, and two names jumped off the draw sheet: They had been here many times before.

In the bottom half, Roger Federer had won Wimbledon a cool eight times, and in reaching a record 18th quarter-final on London’s lawns, he had notched up his 105th match-win here. He would be attempting to reach his 14th semi-final against a man 15 years his junior, No14 seed Hubert Hurkacz.

Federer, Hurkacz and the other two men in this half, Felix Auger-Aliassime and Matteo Berrettini, would take to court later in the day.

First, on yet another cool, breezy day, it would be the top half, headlined by world No1 Novak Djokovic, who had won Wimbledon five times and was defending the 2019 title, when he beat Federer in an extraordinary five-set final. By reaching his 12th quarter-final here, Djokovic had taken his tally of wins at Wimbledon to 76, and he aimed now to reach his 10th semi-final by beating the only unseeded man left in the line-up, the 48-ranked Marton Fucsovics.

The two mega stars of their sport, both the oldest in their halves, still therefore had a chance of contesting the Wimbledon title for a fourth time. But what were their odds among six other men revelling in their first Wimbledon quarter-finals, with all but one having the ambition, drive, and fitness that comes from being aged 25 or younger?

Certainly on paper, and judging by the headlines throughout this year’s Wimbledon, Djokovic was the unstoppable force in the draw, both here and anywhere else he chose to play. For a start, he had been No1 almost continuously since late 2018—Nadal took a 13-week stretch in early 2020—and had overtaken what seemed an insurmountable tally of weeks at the top set by Federer. The Serb is up to 328 weeks and counting.

But beyond that staggering stat, Djokovic had within his grasp achievements that neither of his great rivals, Federer and Rafael Nadal, have managed. Should he win Wimbledon this week, he would join them on a record 20 Majors, but he had already achieved the career Grand Slam twice and the complete set of Masters—twice—which neither Federer nor Nadal has done.

And if he kept up his standard, he could join a rare band indeed with a calendar Slam, last achieved by the great Rod Laver in 1969. And his single-minded focus did, if anything, grow stronger as he pursued the biggest prizes. He said after beating No17 seed Cristian Garin:

“If I start giving away my attention and energy to speculations and discussions and debates [about the greatest of all time], I feel like it’s going to derail me from what I feel is the priority at this moment for me… It’s not a secret that I am trying to win as many Slams as possible. I went for the historic No1 [record]. I managed to achieve that milestone.”

So could any of the three in his half stop Djokovic short of the final? More immediately, could Fucsovics deny him a 100th match-win on grass, and deny him a 41st Major semi-final?

The Hungarian certainly faced his biggest test of the tournament via a tough but impressive route: No19 seed Jannik Sinner, No9 seed Diego Schwartzman, and No5 seed Andrey Rublev. They comprised two four-setters and a five-setter, hard-earned wins and close to 11 hours on court. Not bad for a man who had won just one match here before this year.

He had strung some decent results together at the start of the year, notably reaching the Rotterdam final via qualifying and the quarters in Dubai, though just five match-wins since. But beating Rublev in such a dogfight here was notable: He had played and lost to him three times this year until now. How much confidence would that instill, but how much did he still have left in the tank?

When the first set went to 5-0, it looked as though the answer was ‘not much’. But he survived a break point for a bagel set, and then broke. Another hold made the scoreline more respectable, before Djokovic served it out, 6-3.

The Hungarian pressed Djokovic much harder in the second set, and they were all square at 4-4, with each pressing the other to the extreme corners of the court. One such rally, the longest of the match, comprised 27 shots for Fucsovics to save break point, but come a second chance, and Djokovic had the break he wanted, and served out the set, 6-4.

The top seed then took a quick advantage in the third, but had to save break points to hold for 2-0. Fucsovics continued to make life difficult for Djokovic, though the scoreline remained firmly in the Serb’s favour. Eventually, the defending champion served for the match, 6-4, his century of wins on grass.

He would take on either No10 seed, Denis Shapovalov, or the No25 seed Karen Khachanov, both playing just their second Major quarter-final and their first at Wimbledon.

The expansive and expressive tennis of 22-year-old Shapovalov had really caught the eye this week, especially in beating Andy Murray, then No8 seed Roberto Bautista Agut. Already a Masters finalist at the age of 20, the Canadian’s talent was never in doubt, especially after he beat Nadal in Montreal, as an 18-year-old, to become the youngest ever Masters semi-finalist.

The former Wimbledon junior champion made his first grass semi at Queen’s, and he clearly felt that his grass game had at last moved on from that junior promise:

Perhaps surprisingly, he and Khachanov had only played once before, and that in Davis Cup two years ago. The big Russian won the Paris Masters, one of three titles in 2018, and broke into the top 10 a year later, but since then he had struggled to maintain his place among the top 20, and his run here was certainly his best of the season.

This would be a barn-stormer of the match, with both men hitting big, and chasing the extremities of the court. It was intense and fast-moving tennis, and with little between them. In the first set, Shapovalov got the first advantage, and then served out to love for 6-4. But in the second, the roles were reversed, with Khachanov breaking first and holding to love, 3-0. He was on a roll, his pile-driver serve and forehand making huge inroads for another break.

Shapovalov got one of the breaks back, but ultimately the Russian served it out, 6-3. Again, the third set was close, with fans becoming heavily involved in the big-time exchanges, but one break did the job, from Khachanov, to lead 6-5, and he served it out 7-5, denying a break point in the process. They had won 37 points each in that 51-minute set.

Perhaps inevitably, with so little between two men going for their shots at every opportunity, it would take a fifth set, after Shapovalov regained the upper hand to level, 6-1, with the Russian making too many unforced errors. And it would be another tight one, with Khachanov saving three break points in the fifth game, and then fending off another three in the ninth game. But Shapovalov got a fourth, and this time converted. He served for his first Major semi-final, 6-4, after almost three and a half hours.

It was an emotional win for the young Canadian, but one that earned him the ultimate test in tennis: a showdown with Djokovic. The Serb has a 6-0 lead in previous matches—but the Canadian is a different player at Wimbledon this year. Who knows if he can upset the apple cart this time?