Barely 20 years old, former French Open champ admits: “It’s easier to adjust to any surface when you’re a better tennis player. I grew up, so also mentally I can handle the challenges” 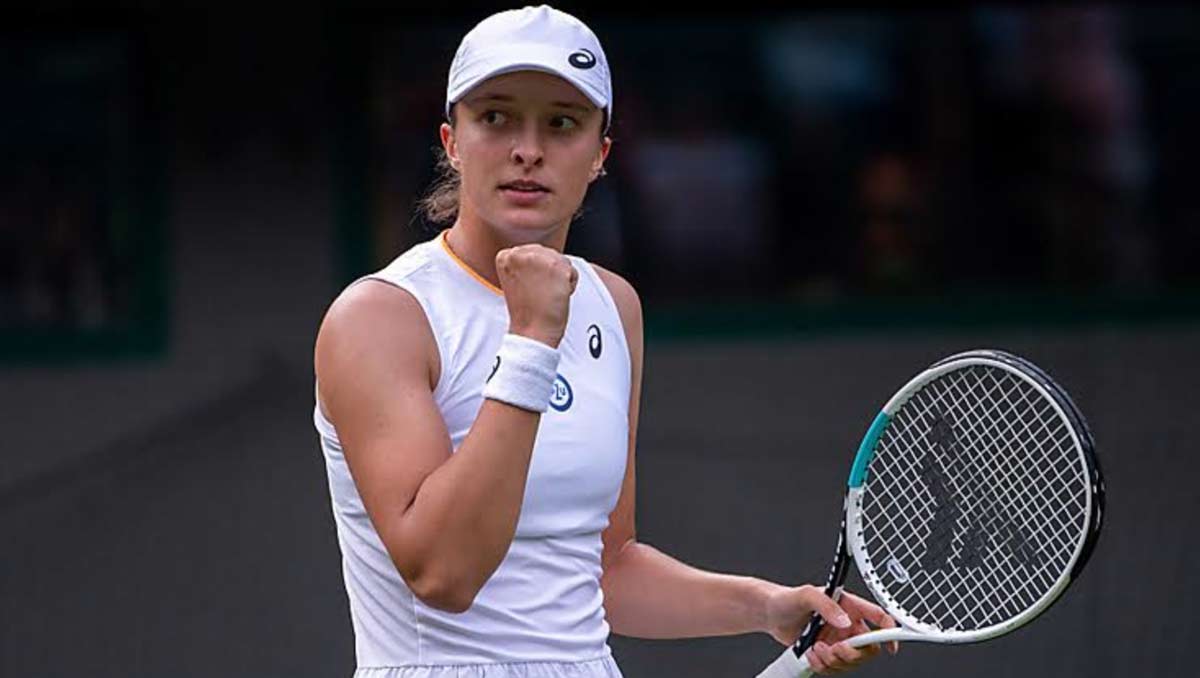 It is easy to forget that Iga Swiatek only turned 20 a month ago, so self-possessed is she, and already such a complete player.

Yet she was just 17 when she played and won her first Major match, in Australia in 2019. Months later, she made the fourth round at Roland Garros: Indeed the only Major where she did not win a match that year was Wimbledon. Something of a surprise, perhaps, given that she won the Junior singles title in 2018.

Before she turned 18, she reached the final on the clay of Lugano, and marked her birthday by reaching the fourth round at Roland Garros. The next year, she was the French Open champion, without dropping a set—indeed conceding no more than five games in any match.

Her success through her junior years and on toward that ultimate prize of a Major title had, it should be said, not been without its hiccups. There were ankle and foot problems, and she missed the end of the 2019 season due to foot surgery after reaching the second round at the US Open.

This year, as she transitioned from 19 to 20, she won on the hard courts of Adelaide and the clay of Rome, then reached the final of the French Open doubles. Now she was back to try and make her mark on grass again, three years on from her Junior title.

Of course there had been precious little opportunity to play on the turf since her first full year of Major tournaments: 2020 was wiped out during the coronavirus pandemic. But come this summer, she had won only one grass match, in Eastbourne, before arriving at Wimbledon. Yet admirers of her tennis—and there are many—pointed to her package of skills and the near certainty that it was only a matter of time until a big run came on this surface.

She has variety in her shot-making, including deft hands at the front of the court honed by doubles tennis. She has a big serve, and variety with it, and has great footwork and speed around the court.

But it is only with the good fortune to watch from courtside that it is possible to appreciate the low trajectory of her strikes, the unexpected changes of direction, and the switch during a thumping baseline from top-spin power to a low swinging slice that, so often, brought an error in return.

Then there is that self-possession. There is an assuredness about her walk from point to point, game to game, and a stillness as she preps for serve, checks the position of the sun, pauses and delivers. Sometimes it takes her only 10 seconds on the shot clock, other times she runs close to the full 25 seconds.

After her opening win, her first as a senior at Wimbledon, she said:

“When I came here, I realised that I’m at Wimbledon, and everybody started talking about my junior run again. I realised that, Hey, it would be nice to win some matches [smiling]… [But] every match is going to give me a lot of confidence just because I only won two matches on grass on WTA level. Yeah, let’s hope for more.”

By the time she faced her third opponent here, in some welcome sunny heat on Court 12, she had spent only two and a quarter hours on court against first the 69-ranked Su-wei Hsieh, then against former Wimbledon runner-up, Vera Zvonareva. She added only 55 minutes in dispatching her latest victim, Irina-Camelia Begu, who was through after beating the other seed in this segment, No26 Petra Martic, in a two and a half hour three-setter.

Perhaps that effort weighed heavy in the Romanian’s legs, for Swiatek dominated almost from the first ball. She broke in the second game, again in the fourth, and held to love for 5-0 in the first set, conceding only four points. Begu did hold in the next game, and then worked break back points, but Swiatek took a little longer over her serve, got back to deuce, and hammered a forehand winner to end an intense baseline exchange. She strode to her chair, 6-1 to the good.

The second set was no better for Begu, and the errors piled up as she increasingly found herself one step behind the pace of Swiatek, whose baseline accuracy seldom missed the mark. Two breaks and the Pole was 4-0 up, but then Begu produced a final challenge in a 10-minute game that saw six deuces and four break points to Swiatek. However, Begu’s resistance proved useless, Swiatek converted her fifth chance, and then served out set and match to love, 6-0.

Still young, and relishing the little things as much as the big ones, she gathered up all her towels, and left court beaming underneath her mask with one of each of the colour-ways draped over her shoulders.

Statistics can be deceptive, though Swiatek’s average serve speed of 101mph, topped at 110, spoke volumes about one of her key weapons as the grass grows drier and faster. She had not needed to come to the net, dominating as she had from the baseline, but that too remains a weapon in her arsenal.

She talked about both elements after the match:

“Basically I’m not going to the net because I’m focusing on the approaches. I want to play fast and with good precision, so sometimes there is no need to go to the net, because you’re just finishing the ball earlier. Of course the serve is a really important part of the game, and I feel like it’s been a good week for my serve, for sure.”

But she also talked about her growing confidence and maturity:

“It’s changing because I just developed as a player. It’s hard to compare my previous years on grass, because in 2019 I was physically weaker. My game, I also didn’t have many options on court, and I didn’t actually have an idea on how to play on grass. This time it’s much better… My skills are better and it’s easier to adjust to any surface when you’re just a better tennis player. I grew up, so also mentally I can handle all the challenges.”

However, hers remains a difficult quarter of the draw that still boasts some of the big threats for the title. Her next challenge could the altogether more formidable figure of former champion and No11 seed, Garbine Muguruza, though the Spaniard would first have to beat the in-form No21 seed Ons Jabeur.

Then the quarter-final posed the likelihood of the powerful No2 seed Aryna Sabalenka, who could go on to claim the No1 ranking if Ash Barty fails to reach the semis. The Belarusian also took little time in beating Maria Camila Osoria Serrano, 6-0, 6-3, in 75 minutes, to set a fourth-round meeting with No18 seed Elena Rybakina.

In the top part of this half, No8 seed Karolina Pliskova beat Tereza Martincova, 6-3, 6-3, and will play either Sloane Stephens or Liudmila Samsonova.