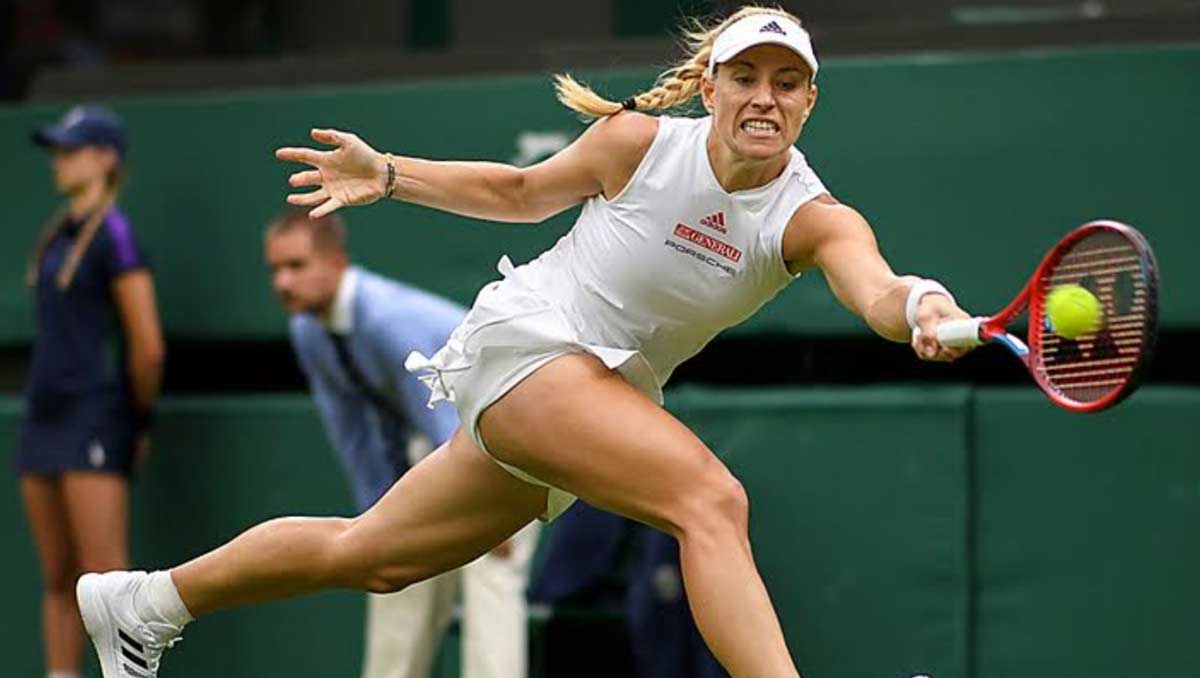 By the second round of this year’s women’s draw, there was a diminishing number of former Wimbledon champions left in contention.

Both Williams sisters, Serena and Venus, the most prolific active winners, had bowed out, the former forced to retire without completing a set.

The defending champion from two years ago, Simona Halep, did not even make it that far: she pulled out after practising here for a couple of days but just before the draw was made.

And two-time champion Petra Kvitova, drawing one of the toughest opening matches in the shape of a fellow Major champion Sloane Stephens, also fell at the first hurdle.

That left just two former women’s champions in the mix, and one of them, Garbine Muguruza, spent fewer than two hours on court in completing two speedy wins. She was into the third round, then, after a cracking start to the season on hard courts in Melbourne, Doha, and Dubai, where she won the title in a very tough draw. With three warm-up matches in Berlin a fortnight ago, she looked primed and ready for Wimbledon’s turf.

The other former champion remaining was Angelique Kerber, who was about to try and join Muguruza in the third round, and in the knowledge that she would no longer face old adversary Serena Williams there.

Since winning in Wimbledon in 2018, the popular German had not won a title on the tour and her last final came in 2019. But last week, she changed all that with the title in Bad Homburg. It served to underline her consistently strong performances on grass through a long career: She was also runner-up at Wimbledon in 2016, and several times runner-up in Eastbourne.

Now she played Sara Sorribes Tormo, winner this year in Guadalajara, quarter-finalist in Miami, and semi-finalist on the grass of Bad Homburg last week. Super quick around the court, she held her own through the entire first set with Kerber, until the former champion pulled off her 19th winner of the set, a drop-shot, on set point, 7-5.

Kerber got off to a good start in the second set, breaking for a 2-0 lead, but the Spaniard hustled and bustled the break back, and they shared more exchanges of breaks, and this time it was Sorribes Tormo who served for the set. She let two chances slip, but finally returned a drop shot with her own to level the match, 7-5.

The Spaniard got an immediate break in the third but once again, Kerber returned the favour, and took another for a 3-1 lead. Naturally, that was not the end of the story. The clock ticked to three hours and beyond as finally Kerber got some open water, 5-2, but still no resolution as Sorribes Tormo broke once more—but it would be the last time in this sterling battle. Perhaps inevitably, it would be a break that determined the result, a win for Kerber, 6-4, with roars of approval from the crowds—and from the German: “C’mon” indeed.

But what of the other Major champions in the draw who remained contenders for the Wimbledon title?

The elegant young Pole Iga Swiatek, who made such an impression in surging to the French Open title last autumn at the age of 19, without dropping a set, continued to make an impression by winning both Adelaide and Rome this year, and many tipped her to excel on grass too with her wide-ranging skills and great movement. Sure enough, she cruised to the third round here in around two and a quarter hours.

Former US Open champion Stephens, too, had yet to drop a set as she headed into the third round, and with Kvitova, No4 seed Sofia Kenin, and two further seeds gone from her quarter, she might anticipate making the second week of Wimbledon for only the second time.

Several other Major-winning women in the top half would hope to join them after a packed day that featured, for example, two-time Wimbledon semi-finalist Victoria Azarenka, and 2018 semi-finalist Jelena Ostapenko.

The young Latvian played Daria Kasatkina, who she beat a week ago on her way to the Eastbourne title, though Kasatkina for her part was runner-up in Birmingham, and had won 27 matches this year so far, including two titles. The two were ranked just one place apart, 34 for Ostapenko, 35 for Kasatkina, and that showed in the ensuing battle of three sets, and an hour and three-quarters. Ostapenko finally edged it, 6-1, 3-6, 8-6.

She and Azarenka featured in a top quarter now devoid of No5 seed Bianca Andreescu but topped by No1 Ashleigh Barty and French Open champion, Barbora Krejcikova.

And the focus of attention, rightly, was on No1 Barty, who had returned from her isolation in Australia since reaching the semis there in 2020 to take this season by storm: Winner of the Yarra Valley Classic, Miami and Stuttgart, and runner-up in Madrid.

She was yet to play on grass since reaching the fourth round here in 2019, and had retired at Roland Garros, the site of her only Major title so far, due to a hip injury, but she negotiated an emotional Wimbledon opener against the returning but retiring Carla Suarez Navarro in three sets.

Now she played Anna Blinkova, a young Russian ranked 89, and it would be something of a battle that lasted an hour and a half. The popular Aussie with the crafty all-court game seemed to have early control with a break, only to concede it for 4-4 in the first set. But she broke again, and this time served it out, 6-4.

The second set also saw an exchange of breaks early on, but as she closed in on the match, she broke for 4-3. However, she had to fight hard to hold off Blinkova in a seven-minute battle, saving four break points for 5-3. She then broke once more to seal the win, 6-3, but this was not the best of Barty, not yet.

She said of her performance:

“Not my best serving day. But that happens. I felt like I was just out of rhythm a little bit. A few technical things weren’t quite feeling spot on. But you have those days where you feel like you’re eight-foot-tall and can’t miss the box. Other days you feel like you’re three-foot-nothing, just getting over the net is a bit of a battle.

She will hope for more accurate serving and fewer errors when she plays unseeded Katerina Siniakova, who was runner-up to Kerber in Bad Homburg, but the Aussie is warming to Wimbledon, and it to her.

No14 seed Barbora Krejcikova was competing in her first Wimbledon singles draw, having come here with not just one but two titles from Roland Garros: the singles and the doubles title—and incidentally the No1 doubles ranking.

The French Open had not been her only success this season by a long chalk, though: the final in Dubai and title in Strasbourg preluded her victories in Paris. Now she pursued her 14th straight singles win against Andrea Petkovic, a former top-10 player who had faced multiple injuries over the years, and was now ranked 130. Back in 2011, the German reached the quarters of all the Majors except Wimbledon, and had never got beyond the third round. Could she get past Round 2 for the first time since 2015?

Krejcikova certainly has the kind of all-court skill and nimble footwork to flourish on grass, and at a break up, she fended off break point with a deft drop volley, and served out the set, 7-5, in a speedy 43 minutes.

The two women exchanged early breaks in the second set, but the Czech broke at the business end and served it out, 6-4, in a comfortable hour and 20 minutes. She will next play Anastasija Sevastova.

No16 seed Anastasia Pavlyuchenkova, runner-up at Roland Garros, beat Kristyna Pliskova, 6-3, 6-3, to get a step closer to her best Wimbledon run, the quarters in 2016.