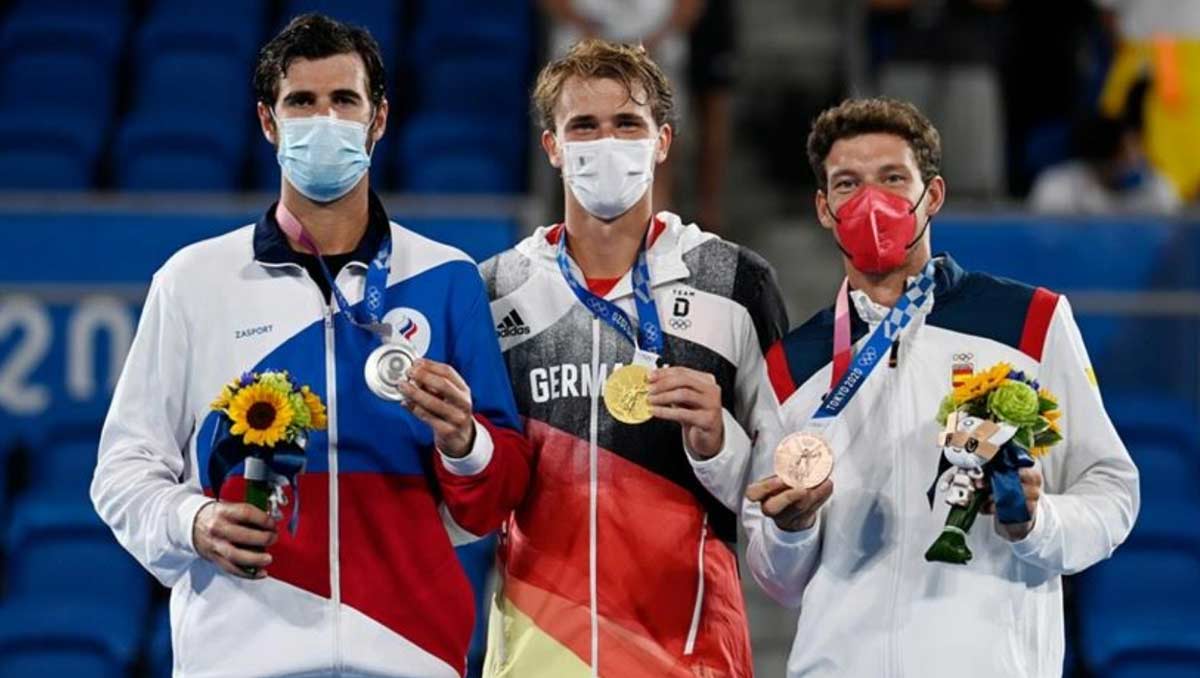 Much of the talk ahead of this year’s postponed Olympics in Tokyo had been about the home superstar and ‘face of the Games’ Naomi Osaka, and world No1 and aspiring Golden Grand Slam champion, Novak Djokovic.

Could the former bring glory to Japan on home soil? Could Djokovic become only the second person, man or woman, to win Olympic gold and the four Majors in a single season?

In the event, neither was able to fulfil their early ‘favourite’ status. Osaka was bundled out by the unseeded—but ultimate silver medallist—Marketa Vondrousova, in the third round.

Djokovic, who had barely been tested before the semis—dropping 17 games in his first four matches—lost out to No4 seed Alexander Zverev. It was, then, a young German who ended the Serb’s dream of matching the only player ever to win ‘the big five’ in a single season, fellow German, Steffi Graf.

Not that Djokovic has sealed the Grand Slam just yet: He will head to New York in a little under a month’s time to try and secure the US Open, and thus another exceptional milestone. Only Rod Laver, in the Open era, has won all four Majors in the same season.

But for now, Zverev is the golden boy, whose precocious talent ensured the first of four Masters titles at just turned 20, who rose to No3 and won the ATP Finals at 21, and last year made the Australian Open semis and US Open final, backing it up with the French Open semis this year.

After beating Djokovic in Tokyo, he became favourite to win the final medal match, and sure enough, he surged to victory over No12 seed Karen Khachanov, 6-3, 6-1, in barely 80 minutes.

“There is nothing better than this. You are not only playing for yourself, you are playing for your country, and the Olympics are the biggest sporting event in the world. The feeling I have now, and will have, nothing will be better.”

Pablo Carreno Busta won the men’s single bronze medal, beating both No2 Daniil Medvedev in the quarter-finals, and No1 Djokovic in the bronze match.

And Khachanov’s silver was not the only medal to go to the Russian Olympic Committee team: They picked up two medals in mixed doubles.

Australia’s Ash Barty and John Peers won the bronze medal after Djokovic and his Serbian partner Nina Stojanovic withdrew from their play-off match, with Djokovic citing shoulder problems and exhaustion.

Perhaps the least surprising victory in the tennis competition this week was from the gold-winning tennis of No1 seeds Barbora Krejcikova and Katerina Siniakova, who beat singles gold medallist Belinda Bencic and Viktorija Golubic, 7-5, 6-1.

Krejcikova has been one of the stand-out performers of 2021, winning the singles title at the French Open, as well as the doubles title with Siniakova. The pair were also runners-up at the Australian Open.