Alan Shearer and Peter Schmeichel both took to social media to applaud Aaron Ramsdale after the Arsenal goalkeeper pulled off a brilliant save in the first half of the Gunners’ 2-0 win at Leicester City.

Ramsdale has been settling in well to life at Arsenal and has established himself as the main man between the posts for Mikel Arteta’s side since his summer transfer from Sheffield United.

Arsenal started Saturday’s game brightly and raced into a 2-0 lead thanks to goals from Gabriel and Emile Smith Rowe.

But it was Ramsdale’s save shortly before half-time that drew the most praise from the pundits watching on, with England legend Shearer and ex-Manchester United star both chiming in after the goalkeeper’s brilliant stop from James Maddison’s free-kick.

Posting on Twitter after the save from Ramsdale, Shearer said: “Wow. What a save that is from Aaron Ramsdale. #LEIARS”

And Schmeichel added in his own tweet: “Best save I’ve seen for years by Ramsdale.” 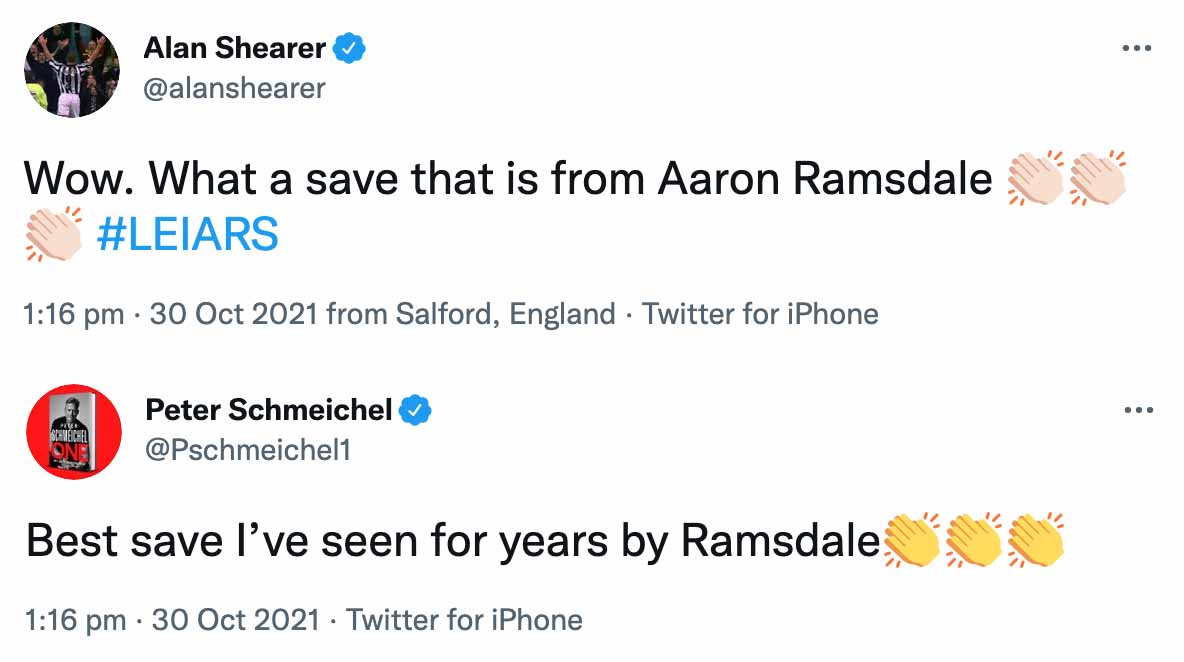 Morgan tweeted: “Another moment of brilliance from @AaronRamsdale98 – a top class goalkeeper with a fantastic commanding presence. Love him.”

The English goalkeeper continued his fine form in the second half, producing a number of important saves to help keep Brendan Rodgers’ men at bay and earning himself the man-of-the-match award.

Ramsdale has started seven of Arsenal’s 10 games in the Premier League this season since having ousted Bernd Leno as the club’s number one choice between the posts.

Saturday’s win lifted the Gunners up into fifth place in the table as Mikel Arteta’s men continued their gradual improvement in recent weeks, with the teams around them in action later in the weekend.

The Gunners – who finished eighth and without a trophy last term – will return to action on Sunday when they host Watford at The Emirates in the Premier League.