Manchester United remain locked in talks over a new contract for Bruno Fernandes as the Red Devils look to tie down the playmaker as a “priority”, according to Italian journalist Fabrizio Romano.

The Portuguese playmaker has established himself as one of Manchester United’s most influential players since his arrival at Old Trafford from Sporting Lisbon in the January 2020 transfer window.

Fernandes has scored 44 goals in 90 games in all competitions for the Red Devils since his move and is one of the first names on the team-sheet under Ole Gunnar Solskjaer at Old Trafford.

The 27-year-old’s current contract is not due to expire until 2025, but Manchester United are thought to be keen to tie the playmaker down to a new and improved deal to secure his future at the club.

According to respected Italian reporter Romano, Manchester United are still in discussions with the player and his representatives over the terms of his new deal.

Romano also confirmed that Manchester United are also looking to tie England full-back Luke Shaw down to a new contract at Old Trafford.

Posting on Twitter this week, Romano said: “Bruno Fernandes contract extension is considered ‘priority’ by Manchester United board since last July. Negotiations still ongoing about salary and length of the contract. 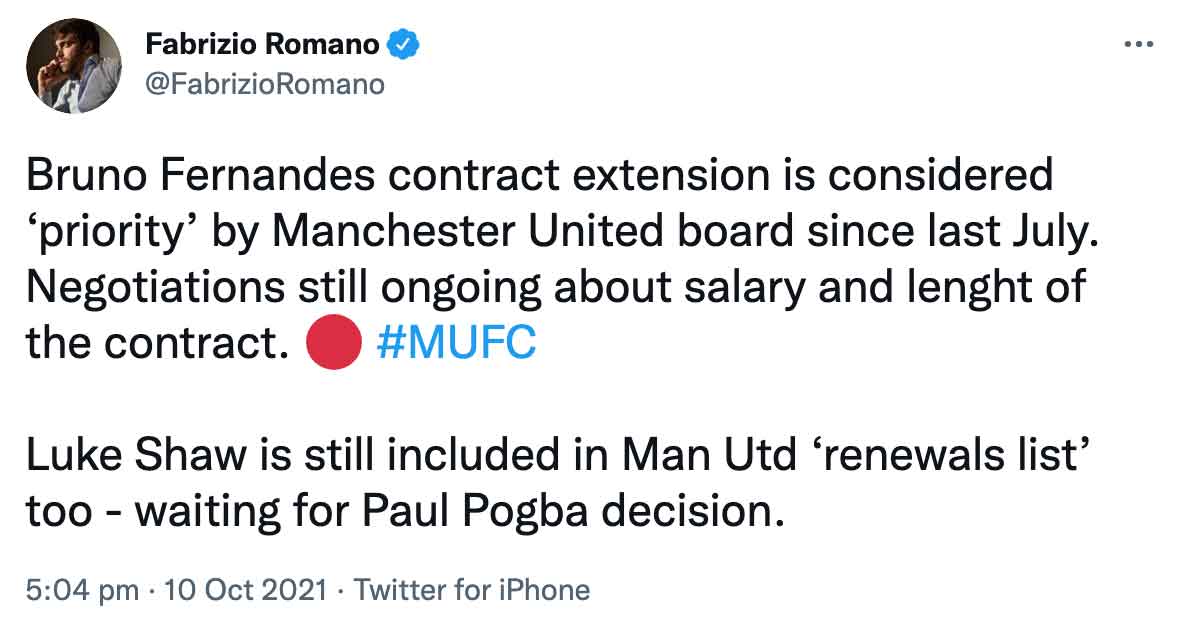 Fernandes has scored four goals and made one assist in seven Premier League games so far this season – and he’ll be expecting to feature when Manchester United travel to Leicester City on Saturday.

The Portuguese attacker, who made four appearances at Euro 2020 in the summer, recently talked up the impact that summer signing Raphael Varane has had at Old Trafford following his move from Real Madrid.

“He’s a winner,” Fernandes said of Varane in an interview with United Review. “Everyone knows that. He’s a nice guy and works really hard and is always pushing everyone to do better.