Dusan Vlahovic continues to be “appreciated” by Arsenal but the Gunners are not currently close to signing the Serbian striker from Fiorentina, according to Italian journalist Fabrizio Romano.

The 21-year-old striker has made an excellent start to the season in Serie A, scoring eight goals and making one assist in 12 league appearances for the Italian club.

Last season, the Serbian forward notched up 21 goals and made three assists in 37 Serie A games as Fiorentina ended up in 13th place in the table.

Vlahovic’s fine form has inevitably led to speculation that some of Europe’s top clubs may be interested in signing him in the forthcoming transfer windows.

Reports last week in Italy suggested that Arsenal were interested in the attacker but have found it difficult to open negotiations about a possible transfer to The Emirates.

Now, respected Italian reporter Romano has provided an update on Arsenal’s apparent interest in Vlahovic, with the journalist seemingly playing down the chances of the Gunners making a move for the forward and saying that a transfer looks “more than complicated” at this time.

Posting on Twitter on Thursday night, Romano wrote: “Arsenal are still on the same position for Dusan Vlahovic. He’s appreciated but there’s no conversation ongoing with his agents – Gunners know he’s in the list of many clubs. It’s more than complicated. 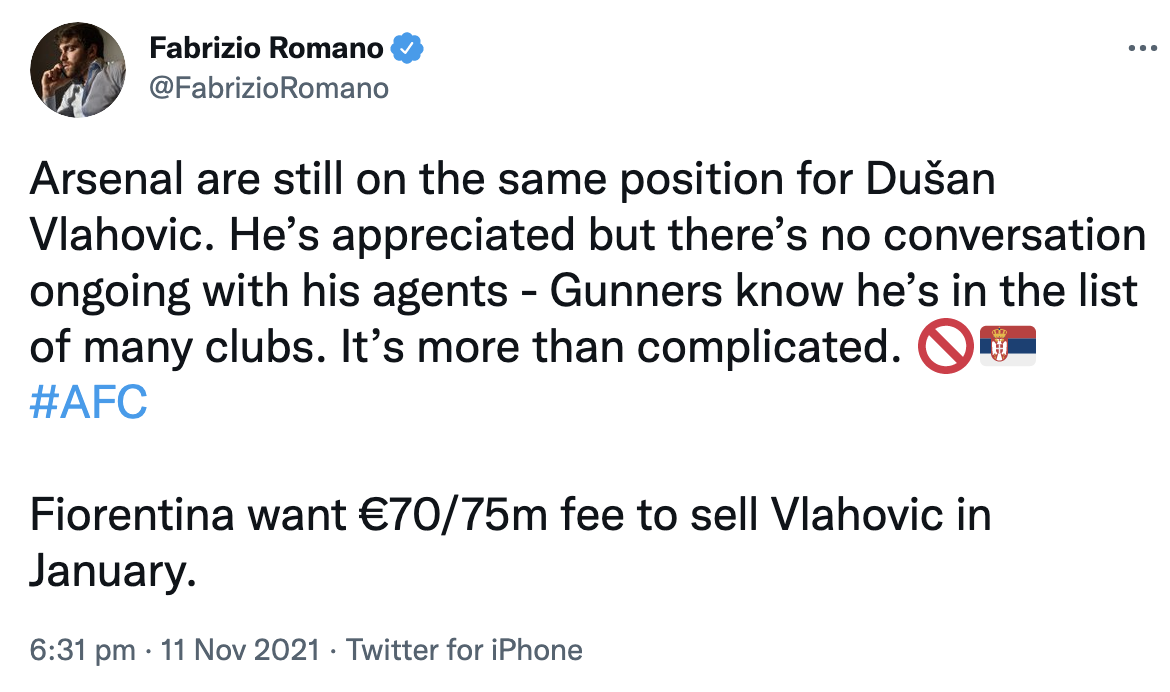 There is bound to be plenty of speculation about transfers in the coming weeks as the January window draws ever nearer.

Meanwhile, Gunners boss Mikel Arteta recently revealed that he’d love to welcome former manager Arsene Wenger back to the club in some capacity in the future.

Wenger has largely stayed away from the north London side since ending his 22-year spell in charge in the summer of 2018.

“I would like him to be more present at the club,” Arteta said of Wenger. “I think the players would love him, benefit, and be inspired to have him around and I think for the club it would be a huge boost.

“It was so intense for him for over 20 years and you need to get away a little bit, but I think it would be so beneficial for all parties to have him more present.”