Djokovic is only man among the eight aged over 25; whole field comprises Europeans 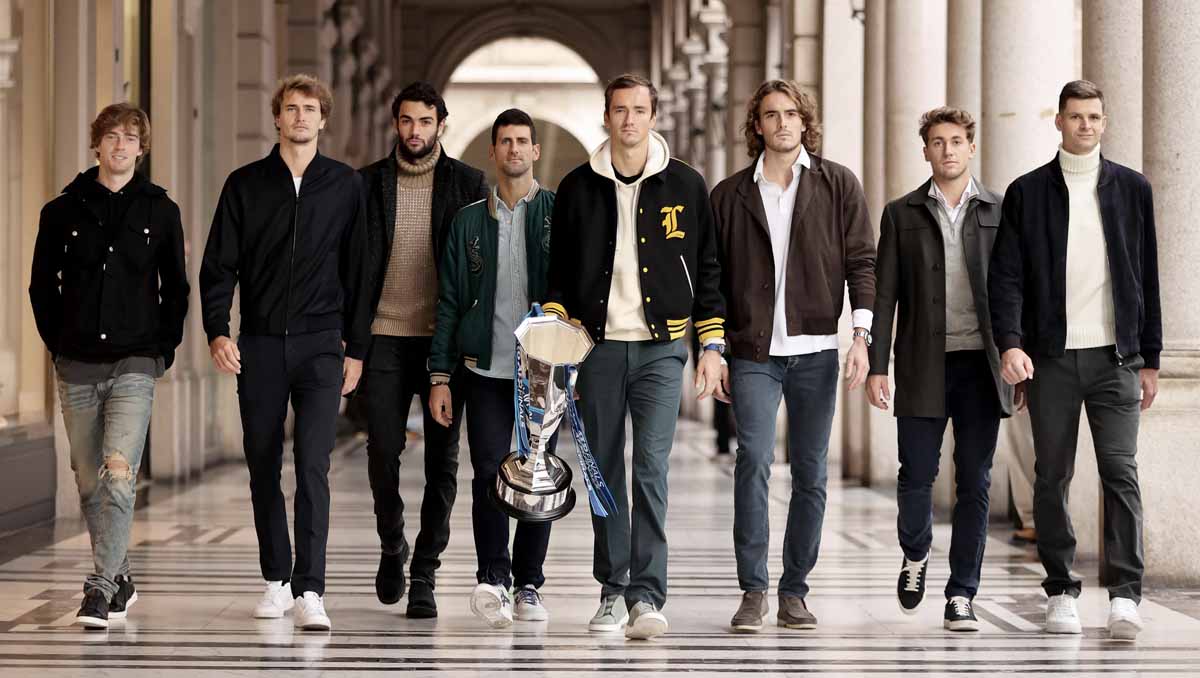 The line-up at the ATP Finals 2021 (Photo: Clive Brunskill / Getty Images for ATP)

This year’s final showpiece, the Nitto ATP Finals, has already made a few new records before one ball has been hit in competition.

For a start, the eight singles and 16 doubles players will take to a completely new stage. After 12 years at the iconic O2 arena in London, the event has moved to the Pala Alpitour stadium in Turin.

And while it will not host a full capacity crowd—the Italian authorities are permitting only 60 percent as the coronavirus pandemic maintains a grip on the world—that is still a huge boost for Turin, for tennis fans and, most of all, the players, after the damp squib that marked the 50th anniversary of the tournament with no audience at all last November.

Another record that could be made in a week’s time will depend upon the four men in the draw who have not won the title before. Last year, Medvedev became the sixth different champion in the last six years, but there have never been seven different champions in a row. That would change if Matteo Berrettini, Andrey Rublev, Hubert Hurkacz or Casper Ruud won in Turin.

The line-up this year has a particular fresh and youthful look, too. There is only one player over the age of 25 in the field for the first time since 1993. There are, though, some notable absentees from the other end of the age spectrum.

Six-time champion, the 40-year-old Roger Federer, has played the tournament 17 times, but was unable to play last year following knee surgery and has slipped in the ranks this year after more knee surgery.

Rafael Nadal, now age 35, has qualified almost as often as Federer, though missed the competition half a dozen times because of end-of-season injury, and this year is the same: He underwent foot surgery in the autumn.

However, the third in the tennis triumvirate, Novak Djokovic, is not only present and correct in the draw, but is world No1, top seed, and the favourite to win a record-equalling sixth title.

Certainly all eyes will be on the chart-topping Serb after he put together a barn-storming season that broke or matched a clutch of records held by those two rivals.

With his Australian Open victory, he extended his record there to nine titles. With the French Open title, he became the first to win all four Majors at least twice. And with the Wimbledon title, he matched the 20 Major titles won by Federer and Nadal.

He then won a record sixth Paris Masters only a fortnight ago to rise above Nadal with a record-making 37th Masters title.

And along the way, he overtook Federer’s long-standing record of weeks at No1, 310, and continues to march ahead and out of reach with 347 weeks and counting. That has culminated in another new record, a seventh year-end No1 trophy, overtaking Djokovic’s idol, Pete Sampras.

So yes, the Serb’s progress towards his last big target of the season, that sixth ATP Finals title, and the oldest to do so, will be followed closely.

· Daniil Medvedev is the No2 seed, and beat Djokovic to the US Open title in September. He is also the ATP Finals defending champion. The 25-year-old Russian is making his third appearance at the tournament, after winning 54 matches and a total of four titles in 2021. As well as his first Major title in New York, he won the Toronto Masters plus Mallorca and Marseille, and was runner-up to Djokovic at both the Australian Open and Paris Masters, but has scored wins this season over all seven fellow qualifiers.

· Alexander Zverev is No3 seed, won gold at the Tokyo Olympics, beating Djokovic in the semis, which was one of five titles for the year: Vienna, Cincinnati Masters, Madrid Masters, and Acapulco. He is joint leader with Tsitsipas with 55 match-wins, and won the ATP Finals in 2018. He has beaten all his fellow qualifiers this year except Hurkacz—though he won their only previous match in 2019—and Medvedev, who has won their last four meetings through 2020 and 2021.

· Stefanos Tsitsipas is No4, was champion in 2019, and has notched up 55 wins this season. As well as winning his first Masters title in Monte-Carlo, he won Lyon, reached his first Major final at Roland Garros—he lost to Djokovic—plus the finals in Barcelona and Acapulco. He has beaten all his fellow competitors this year except Djokovic, though all but Berrettini have also beaten the Greek. The Serb, though, has won their last five matches dating back over two years.

· No5 is Andrey Rublev, and like Tsitsipas, is in Djokovic’s group so will play him for the first time in his career in the round robin phase. The 24-year-old Russian won Rotterdam and reached the final of two Masters events in Monte-Carlo and Cincinnati, made the semis in Miami, Dubai and Doha, and the quarters at the Australian Open. He has won 48 matches this year, but only 12 of those since Wimbledon, and has scored wins over only three of his fellow competitors this season: twice against Ruud, once against Tsitsipas and Medvedev—though the latter pair have also beaten Rublev.

· At No6 is Matteo Berrettini, the only home grown player and competing in the tournament for only the second time. He made his first Major final at Wimbledon—losing to Djokovic—having won at Queen’s and the Serbia Open, and he was runner-up to Zverev at the Madrid Masters. He has also lost to Medvedev and Tsitsipas this year, and twice more to Djokovic, though has beaten Ruud and Hurkacz.

· No7 is Hubert Hurkacz, whose breakout season took him to the Miami title via five higher seeds, including Rublev and Tsitsipas. He also won Delray Beach and Metz, and beat Medvedev on his way to his first Major semi at Wimbledon. Eight times he has lost his opening match this year, and has a 3-4 win-loss record against fellow players this season. He was one of the last to qualify for Turin, where he is making his first appearance in the tournament.

· Casper Ruud, No8, also makes his debut in the tournament, and is the youngest of the eight, age 22. The Norwegian won three consecutive titles during the summer clay-court swing in Bastad, Gstaad, and Kitzbuhel. He also won in Geneva and San Diego, made the semis of the Madrid and Monte-Carlo Masters and the quarters of three more Masters. Ruud beat Tsitsipas in Madrid, but elsewhere in 2021 he has lost to Rublev, Berrettini, Medvedev, Tsitsipas, and Zverev. He lost to Djokovic in their only meeting, in 2020, and has never played Hurkacz.

· Europeans comprise the entire field for only the second time (also in 2019).

· To win the 2020 title, Medvedev beat No1 Djokovic, No2 Nadal and No3 Dominic Thiem to become the first player in the tournament’s history to sweep the top three players in the ATP rankings.

· Djokovic, Ruud and Zverev all have five titles this year, but Medvedev has the most hard-court wins at 42, with Zverev next on 37 (out of a tour-leading total 55 with Tsitsipas).

· Each singles player earns $173,000 participation fee, and the same amount for each round-robin win, plus 200 ranking points.

Evening: Berrettini plays 2018 champion Zverev in a rematch of the Madrid final won by Zverev.