Muguruza on her return to top form: “Look where I am now with that mentality, keeping positive. I made it.” Czech pair Krejcikova and Siniakova seal doubles title on anniversary of Velvet Revolution 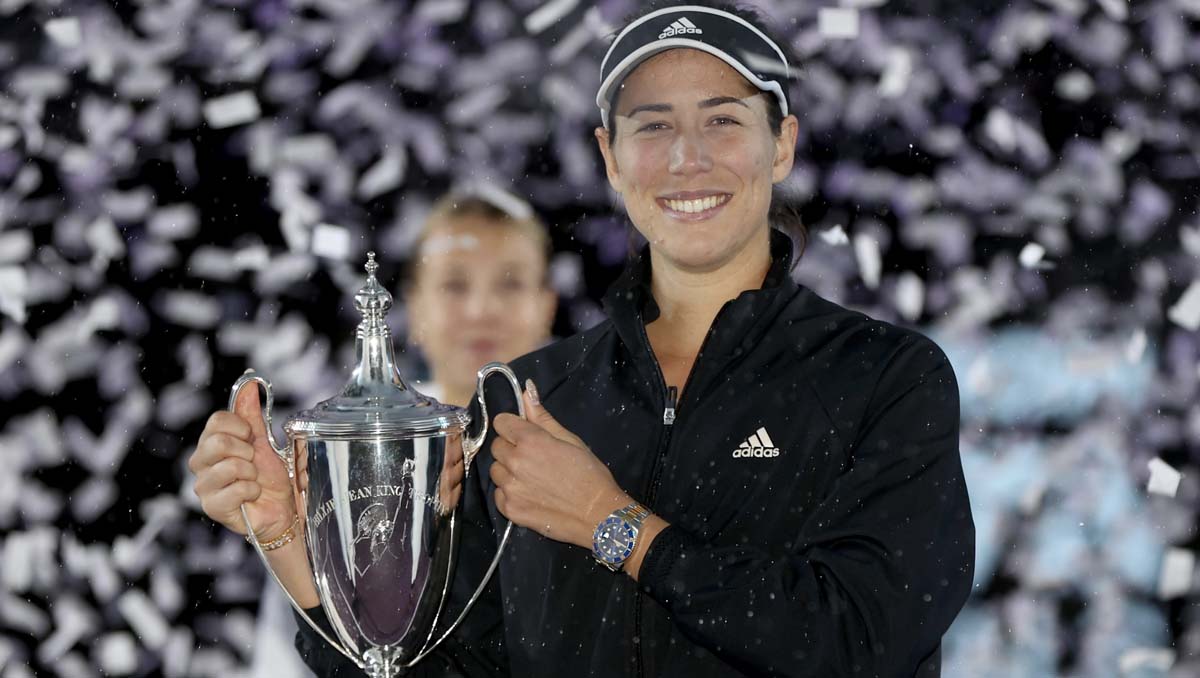 Garbine Muguruza won her third title of the season to become the record-making WTA Finals champion in Guadalajara on Wednesday night.

She beat Anett Kontaveit, 6-3 7-5, in the championship match, and in doing so, she became the first Spanish woman in WTA history to win the season’s finale, going one better than compatriot Arantxa Sánchez Vicario, who reached the final in 1993.

The former world No1 and two-time Major champion had been the Mexican fans’ favourite since she struck her first ball in the tournament a week ago. The Spaniard is South-American born, and has won two titles in Mexico, both in Monterrey: This victory takes her win-loss record on Mexican soil to 14-2.

In the process, Muguruza ended one of the hottest runs in women’s tennis in 2021. Anett Kontaveit made her debut in the tournament after winning four titles in her last seven events, and she reached her third consecutive final in Guadalajara by winning 29 of her last 32 matches.

However, it was Muguruza who ended her 12-match winning streak in the round-robin phase, the only woman to beat the Estonian in the last month. Indeed, the two finalists came into the match ranked first and second on hard courts for the season, Kontaveit with 39, and the Spaniard with 34 after winning the titles in Dubai and Chicago.

Muguruza had been playing big-time tennis, with aggressive and bold baseline hitting, throughout the tournament, only just missing out on a clean sweep when she lost to Karolina Pliskova in a final-set tie-break.

Early in this match, the two women exchanged breaks, but the superior serving of Muguruza ensured she did not let another break in the seventh game go to waste: She won four straight games to break again for the set, 6-3.

However, Kontaveit was soon back on track in the second set, taking advantage of some over-hit strikes from Muguruza to break in the seventh game, and hold for a 5-3 lead. But serving for the set, the Estonian faced a break-back point, and the tall Spaniard seized her chance with a forehand winner, 5-5.

And from there, Muguruza surged to the winning line with another break, 7-5, after an hour and 38 minutes.

It was certainly an emotional moment: Her coach since the end of 2019, Conchita Martinez, had been in her box throughout the tournament, and they embraced in celebration of what has all the makings of a partnership made in heaven. This is the first full season the two have worked together after the global pandemic played havoc with 2020, and Muguruza may well have won considerably more this year were it not for a setback from injury at the start of the clay swing.

Her emotions were writ large in talking of her biggest title since Wimbledon in 2017:

“Very emotional. I think I’m staying composed a little bit now because it means really a lot to me to win such a big, big, big tournament, the Masters in Latin America, here in Mexico. I think it’s just perfect.”

But she also talked about managing the stress and finding the right positivity to win big—helped not a little by the counsel of Martinez:

“I was stressed at the beginning because I wanted to do so well. I had a tough group. I didn’t start well. But I was like, OK, calm down, you wanted to be here, this is your dream, you still have a chance, so be quiet for a little bit, stop complaining, just keep fighting…

“Me and Conchi, we were speaking… just seeing all the good and positive things. I know we lost [against Pliskova], but we’re here. You have a chance. We’re not leaving from Guadalajara without just giving it all. Look where I am now with that mentality, keeping positive. I made it.”

Muguruza will rise to No3 in the rankings this week for the first time since 2018, and has her eye firmly on the big prizes in 2022:

“I’m very motivated to just play those Grand Slams that are not yet in my place in my home. I’m still waiting for those ones there. Overall the big trophies are what motivate me.”

In the doubles event, Barbora Krejcikova and Katerina Siniakova were undefeated on their way to winning the title, beating Hsieh Su-Wei and Elise Mertens, 6-3 6-4.

The victory assured the No1 doubles ranking for Siniakova, taking her spot from Hsieh, though all four finalists have held the No1 ranking during their careers.

It marked the fifth title of the season for the Czech pair after winning Olympic gold and their third career Major at Roland Garros—with Krejcikova also winning the singles title on her way to qualifying for the singles draw in Guadalajara.

And in receiving the Martina Navratilova trophy from the woman herself, Krejcikova made an emotional speech on the 32nd anniversary of the Velvet Revolution:

“Everybody understands what was happening back then, we have here Martina Navratilova, who was forced to emigrate from Czechoslovakia because of the regime there. I’m really happy that regime is not there anymore and we can live in freedom.

“So… I want to thank everybody back home and I really appreciate what they did, how brave they were. They gave us the opportunity to live in freedom and I’m really proud to be from Czech Republic.”

It reduced Navratilova to tears—as it did to many who looked on.

WTA Finals 2021: Muguruza storms into final for a rematch with Kontaveit