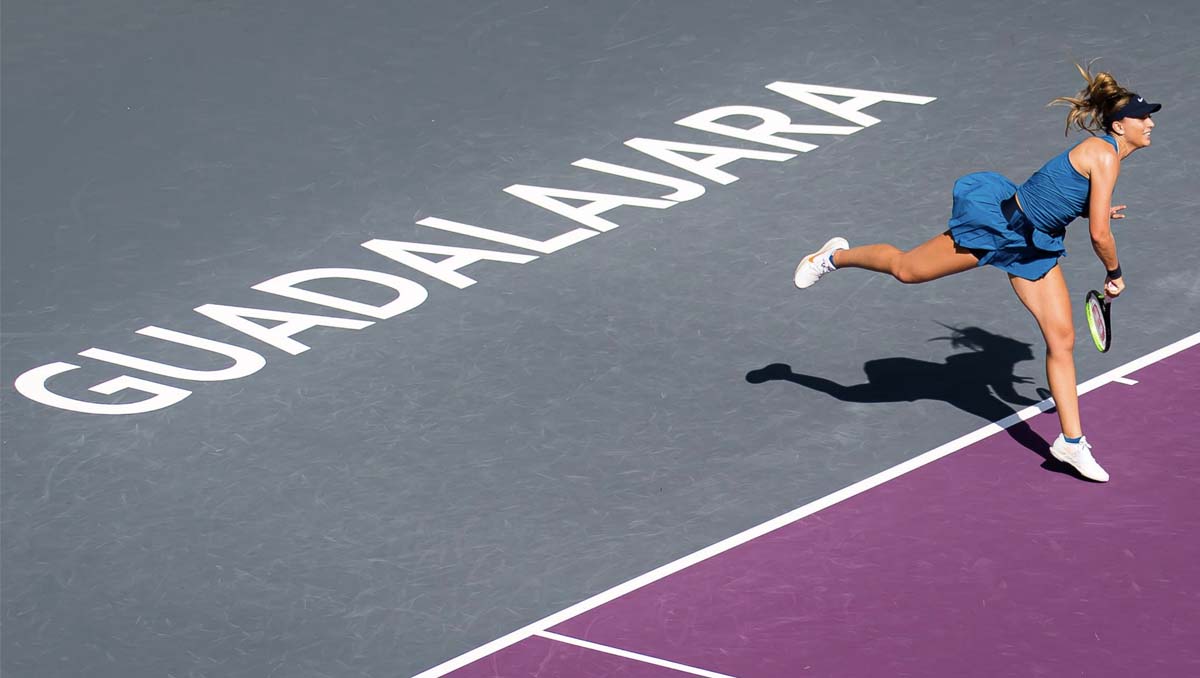 Garbine Muguruza and Paula Badosa have been cheered on by packed crowds in this year’s one-off playing the WTA Finals in Guadalajara.

It is the first time the season finale for women’s tennis has been held in Spanish-speaking Mexico, and there has been no doubting the delight of fans in hosting the tournament, and especially their delight at what has become a record-making effort by Muguruza and Badosa.

Badosa, playing in the tournament for the first time after an outstanding surge through 2021 from No70 to No7 via her biggest victory in Indian Wells, was the first through to the semis.

She won her two opening matches against Aryna Sabalenka and Maria Sakkari in straight sets, and was guaranteed a semi-final place once the round-robin match between Sabalenka and Iga Swiatek went to three sets.

Sabalenka has a chance to claim the second semi-final place in group Chichén Itzá when she takes on Sakkari tonight, but the youngest woman in the tournament, Swiatek, already knows her fate: She will be on her way home.

Anett Kontaveit was the last of the eight women to qualify for the WTA Finals, right behind Badosa, and she too carried some stunning form into Guadalajara having won four titles since late August: Cleveland, Ostrava, Moscow and the Transylvanian Open—all on hard courts.

In Guadalajara, she beat French Open champion Barbora Krejcikova and then former No1 Karolina Pliskova in straight sets, so once Pliskova’s match against fellow Czech Krejcikova went to three sets, Kontaveit was assured of qualifying top of the Teotihuacán Group.

But Pliskova’s three-set win also made the scenario very straightforward for Muguruza: a win over Kontaveit in the last match of this Group’s round robins, and she would head to the semis in second place.

Sure enough, she beat the Estonian, and halted her 12-match winning streak, with a 6-4, 6-4 win, and will next face fellow Spaniard Badosa in the semis tomorrow.

The winner of that showdown will become the first Spanish woman to reach the final since Arantxa Sanchez-Vicario was runner-up in 1993.

Of her efforts, Muguruza said:

“Today was a match that was kind of everything or nothing… Starting the round-robin with a loss, it was never good. To finally get two wins and qualify was amazing. Today I think I played the best match out of the three.”

The fans, of course, could barely contain their joy. After all, Muguruza was born in South America to a Venezuelan mother, not moving to Spain until she was six. And two of her nine titles have been won in Monterrey, Mexico.

No surprise, perhaps, that she has been the star of the night sessions in Guadalajara all week, and entertained the fans in her first two matches with two, three-set thrillers, one lost in a final tie-break, the other coming from a set down to beat Krejcikova.

Who the crowds will support when former world No1 Muguruza takes on the new darling of Spanish tennis, Badosa, in the semis is anyone’s guess—though the safe money is surely on Muguruza.

So there is just one set of round-robin matches left, with 250 points and $110,000 up for grabs for the winners. That would be a last-minute fillip for Swiatek before she heads home, but Badosa will also be keen to maintain the momentum she has built with her eight-match winning streak.

But the more significant match for the tournament is the one between Sabalenka and Sakkari: That will determine who faces Kontaveit in the other semi-final come Tuesday.

Top seed Sabalenka has a 4-1 advantage over Sakkari, with the Greek’s sole victory coming in their first meeting more than two years ago.