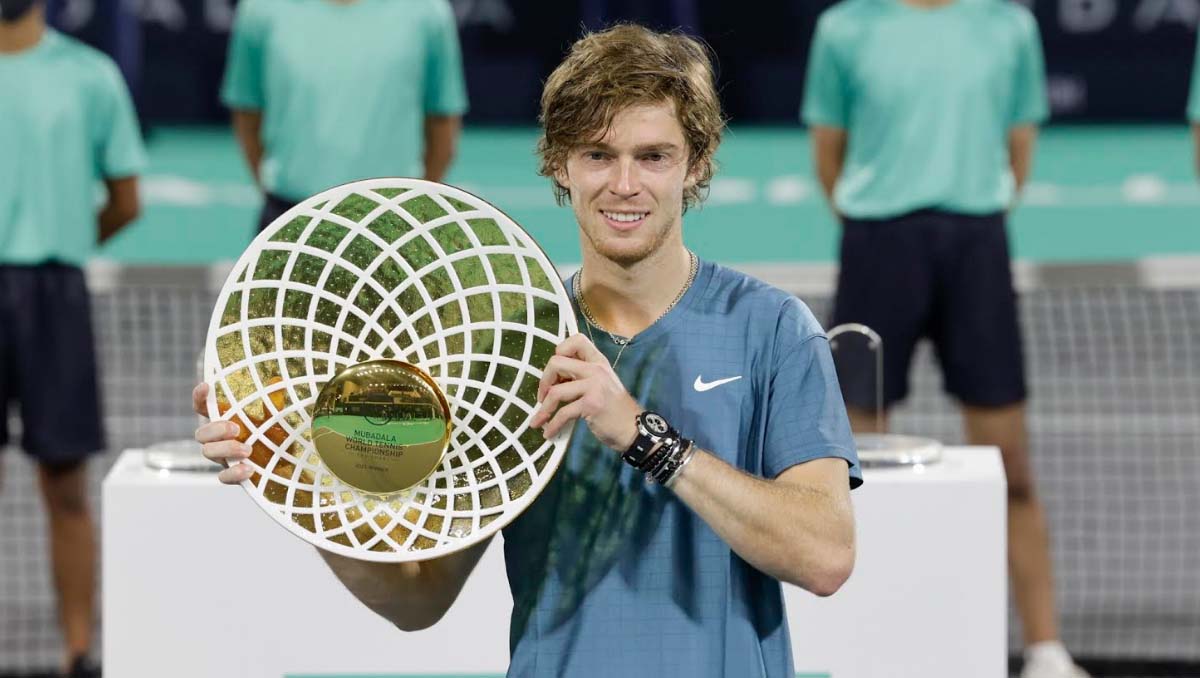 While Andy Murray was getting in a valuable hard-court workout in Abu Dhabi in preparation for the long, arduous start to the 2022 season in Australia, there was unwelcome news from back home.

Murray was scheduled to join brother Jamie and the best of Scottish and English tennis in a few days’ time for Schroders Battle of the Brits in Aberdeen. But with the new iteration of Covid swamping the UK, the event was postponed to 2022. Fortunately for the younger Murray, though, he has not looked in need of too much more work to be ready for Australia.

The two-time winner of the three-day Mubadala World Tennis Championship impressed in his first ever match against fellow Brit Daniel Evans, 6-3, 6-2, and that brought set up Murray had hoped for. He took on five-time Abu Dhabi winner and old rival, Rafael Nadal, for the first time in five and a half years.

Two ‘old guys’, as Murray described them, trying to put on a show: He is 34, Nadal 35, and both have had their share of injuries.

It was not long ago that the Briton wrestled with the prospect of leaving his sport after his latest and most severe hip surgery less than two years ago. There were, though, signs of the old fighting body and heart in several matches during 2021, and now he relished the chance to play again one of his greatest rivals.

The mighty Spaniard, for his part, played just two events outside the European clay swing in 2021, wrestling with a foot injury during and after the French Open. He went on to pull out of both Wimbledon and the Olympics, and after an outing in Washington in August, he withdrew from the rest of the season.

He arrived for the attempted defence of his Abu Dhabi title via training sessions at his new Rafa Nadal Academy in Kuwait, but Murray, with more match-play in recent months, was a step faster and sharper than Nadal: He was the convincing winner, 6-3, 7-5.

Murray, twice a winner in Abu Dhabi, would attempt to make it three in a final against world No5 Andrey Rublev, who beat another of the young stars in the line-up, world No14 Denis Shapovalov, 7-6, 3-6, 6-4.

But before that final, Nadal would have another work-out against the 22-year-old Shapovalov in a third-place play-off.

Shapovalov took the initial advantage, an early break, but Nadal levelled for 5-5, and then edged the tie-break, 7-6(4). He also enjoyed vocal support from the fans, and disrupted the concentration of the young Canadian.

However Shapovalov held his advantage in the second set to take it, 6-3, and they went to a championship tie-break. With Nadal making uncharacteristic errors, the match went to his opponent, 10-6.

And so to Murray and Rublev, with the Russian 10 years the Briton’s junior and with a win over Murray on his way to the Rotterdam titles this year.

Indeed Rublev had stormed up the ranks since winning the Doha title early in 2020: six titles from nine finals, two of the latter at Masters events. There were three quarter-final runs at three different Majors, plus this year’s ATP Cup and Davis Cup victories with his Russian team-mates.

Rublev is a powerful and passionate young player, with a huge forehand and serve, and in the end, all his weapons, plus his formidable speed and intensity, broke through the defences of Murray.

Rublev pummeled winner after winner in the first set, despite Murray serving well, and took it, 6-4. He also broke early in the second, but a slight dip in level opened the door for the Briton to level, and it went to a tie-break.

But again, Rublev had too much speed and fire-power for Murray, pounding on to the title, 7-6(2).

Murray has huge support at this event, but the fans also took to new young champion and his intense, searing shot-making. Even more so once his character transformed back into its shy, self-deprecating norm, punctuated by a huge smile.

He said of Murray:

“It’s a big pleasure and honour to share a court with Andy—he’s a true legend and such a nice guy. We had a great match today—that’s what we play tennis for.”

Asked if he would come back to defend the title next year, he grinned again:

“Of course if you invite Andy and me, we will be back.”

Murray was upbeat about the loss: He had, after all, scored two very good wins over Evans and Nadal. He went on:

“I have been pretty healthy the last three months. I got to play a lot of matches, and just need to find a way of turning a lot of these matches against top players around, and hopefully have some big runs in some of the bigger tournaments. And I’m trying really hard to do that.”

It will all begin again in Australia in just two weeks’ time.