AC Milan and FC Barcelona are interested in signing Andreas Christensen but Chelsea FC are hopeful that the Denmark international will sign a new deal at Stamford Bridge, according to Italian journalist Fabrizio Romano.

The Denmark international’s future at Chelsea FC has been a source of debate seeing as Christensen has little over six months left to run on his current deal with the Champions League holders.

Christensen has been a key part of the Chelsea FC team under Thomas Tuchel and he helped them to win the Champions League for the second time in the club’s history thanks to a 1-0 victory over Manchester City back in May.

The 25-year-old has started 10 of Chelsea FC’s 15 games in the top flight this season as Tuchel looks to guide the Blues to the Premier League title ahead of Manchester City and Liverpool FC.

Christensen has been linked with a potential move at the end of the season amid persistent reported interest from FC Barcelona as Chelsea FC continue negotiations with the Danish centre-half.

Romano has now revealed that Chelsea FC have a new contract ready for Christensen but they’re waiting for their number four to commit to the south west London side amid interest from Spain and Italy.

Romano wrote on Twitter: “Andreas Christensen has been approached again by Barcelona [free agent, June 2022] and AC Milan [January, to replace Kjaer] but both clubs feel he’ll extend his contract with Chelsea in the next days/weeks Blue circle #CFC

“Chelsea have everything ready – just waiting for Andreas to sign.” 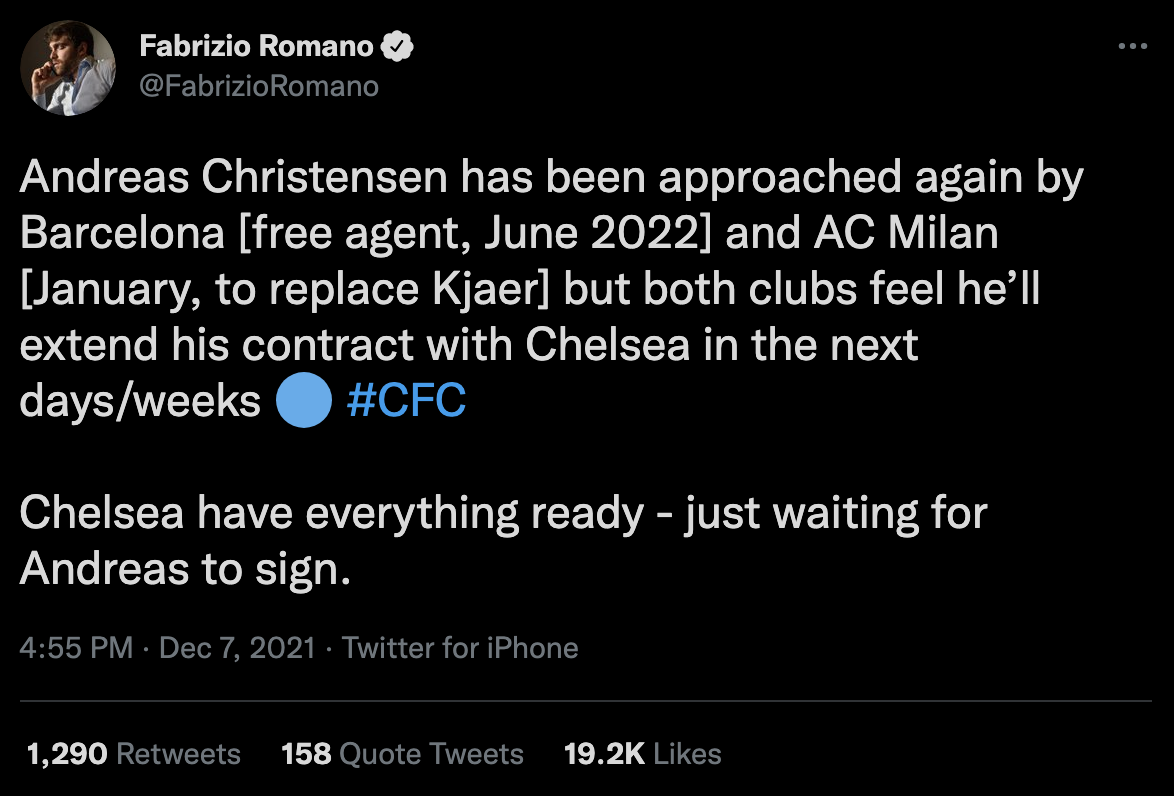 Christensen came through the ranks at Chelsea FC after he moved to the Stamford Bridge outfit from Danish club Brondby at the age of 16.

The Denmark international has scored one goal in 140 games in all competitions for Chelsea FC over the past six seasons.

Tuchel revealed last week that he is confident Christensen will commit to Chelsea FC in the near future.

“My understanding is that it’s a matter of a very short period [of time] that we have good news,” Tuchel told BBC Sport when asked about Christensen’s contract situation.

Tuchel added: “For me it’s a matter of days. We think that we can have good news about Andreas.

Christensen has won the Champions League, the Europa League, the Uefa Super Cup at Chelsea FC.

Journalist: Chelsea FC not signing 23-year-old from Fenerbahce in January

‘He is a massive talent’: Ralf Rangnick raves about Man United forward