Chelsea FC aren’t interested in signing Attila Szalai from Fenerbahce in the January or summer transfer windows next year, according to Daily Telegraph reporter Matt Law.

The 23-year-old has been linked with a potential move to Chelsea FC in recent weeks following his impressive performances for both club and country over the past 12 months.

Szalai was a key part of the Hungary team that impressed at the European championship despite being in the same group as France, Germany and Portugal.

The Hungarian defender is already a key member of the Fenerbahce team despite moving to the Turkish club less than 12 months ago from Cypriot First Division outfit Apollon Limassol.

Earlier this week, Hungary manager Marco Rossi was quoted as saying that the Hungary international was set to join Chelsea FC in the January transfer window.

But Daily Telegraph journalist Law has contradicted the Hungary coach’s statement and quashed the suggestion that Szalai is heading to the south west London side.

Law wrote in his Twitter account: “Chelsea do not have a deal agreed to sign Attila Szalai in January or the summer – despite what the Hungarian coach might think. Told he’s not currently a player of interest to #cfc” 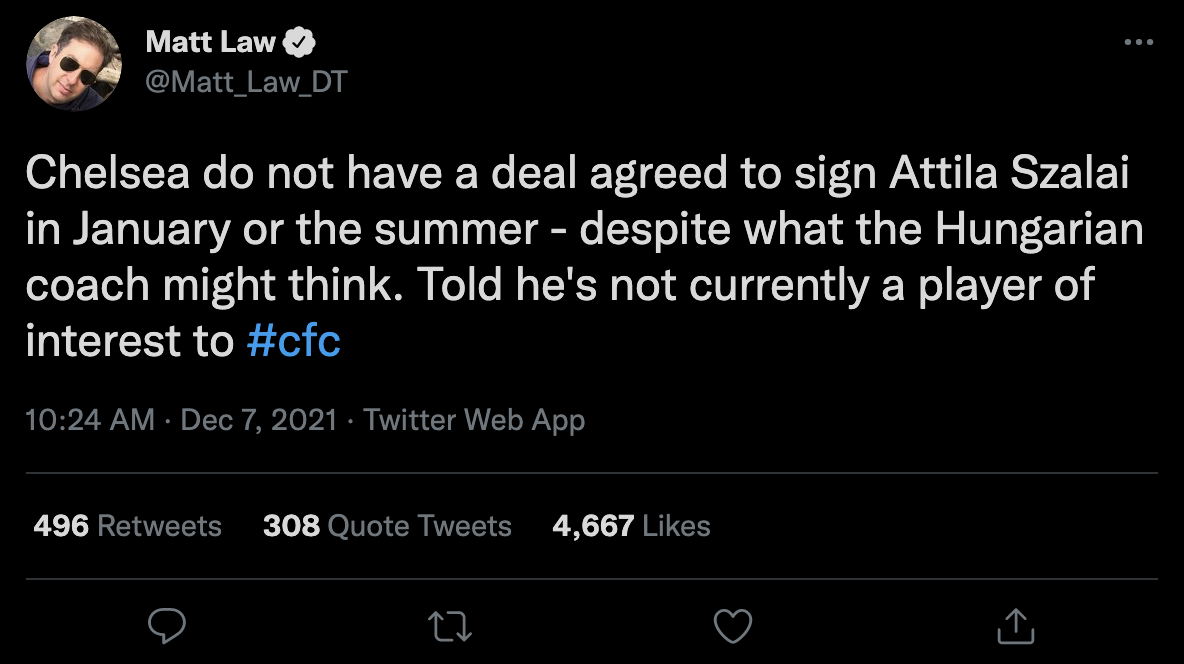 Szalai has scored three times in 33 games in all competitions over the past 12 months at the Super Lig club.

The 23-year-old has already been capped 16 times by the Hungary national team since making his debut in 2019.

Fenerbahce released a statement on Tuesday that back up Law’s claims and denied the existence of an agreement with Chelsea FC for the sale of Szalai in January.

The club statement read: “The allegations regarding the transfer of our player Attila Szalai, which have been made public in the last few days, based on foreign press and social media, do not reflect the truth.

“Our club has not made any transfer negotiations regarding our successful football player Attila Szalai. Our player continues his work completely concentrating on the goals of our team. We present this to the public.”

Chelsea FC will host Leeds United in the Premier League on Saturday afternoon as the Blues look to bounce back from a 3-2 loss to West Ham last weekend.