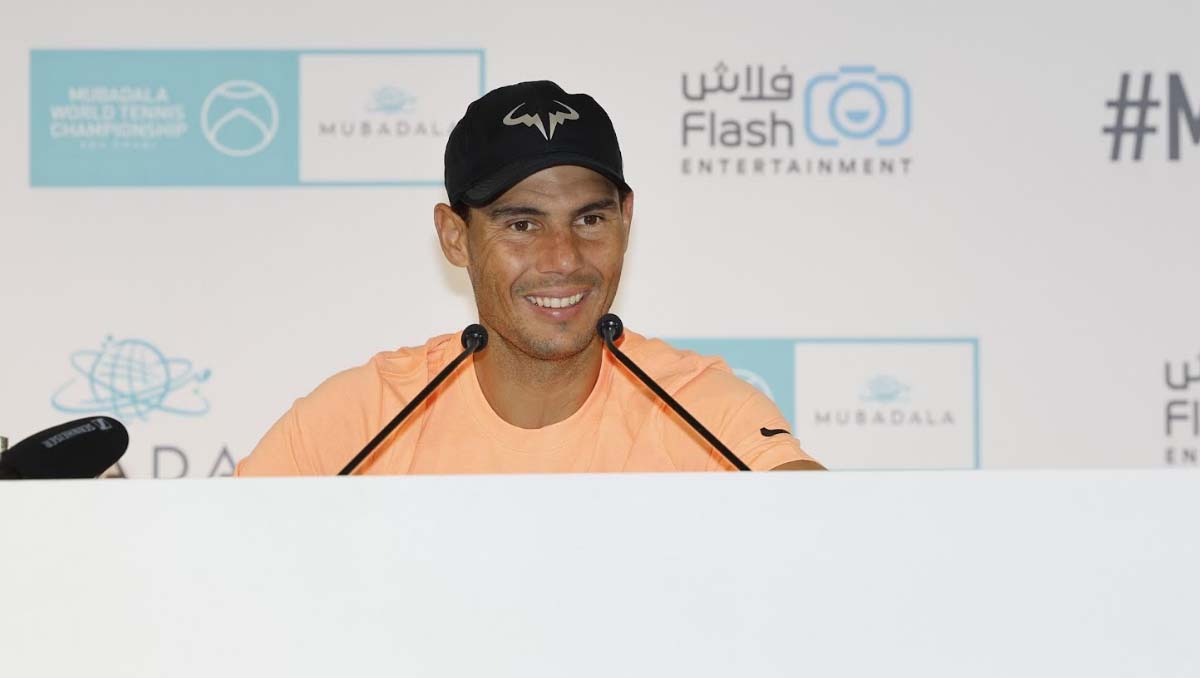 Rafael Nadal, who has played just two matches since losing at his beloved Roland Garros in June, is finally back where sporting enthusiasts want him to be: in the heat of tennis competition.

The mighty Spaniard, who played just two events outside the European clay swing in 2021, wrestled with a foot injury during and after the French Open, and went on to pull out of both Wimbledon and the Olympics. And when he did return, in Washington in early August, he soon revealed that his foot problem would keep him out for the rest of the season.

But now he is back, and has been training at his prestigious Rafa Nadal Academy in Kuwait, a mere hop, skip and jump down the Persian Gulf from this week’s popular three-day event, the Mubadala World Tennis Championships in Abu Dhabi.

The pre-season warm-up showcase has always drawn a strong line-up, with previous winners including Andy Murray, Novak Djokovic and Nadal, who is a five-time and defending champion. So although the likes of Dominic Thiem and Casper Ruud were forced to withdraw at short notice, this remains an intriguing event that will undoubtedly attract decent crowds—especially with the prospect of a 25th meeting between Nadal and one of his old rivals, Murray.

The Briton has endured more than his own share of injury problems in the last few years, culminating in replacement hip surgery less than two years ago. And ‘old’ is an appropriate description of this rivalry: They first met 14 years back, but have not faced each other on the tour since May 2016.

Murray earned the long-awaited rematch with a strong performance over compatriot Dan Evans, 6-3, 6-2, in what was, somewhat surprisingly, their first tour match. Murray, currently ranked 134, and overcoming both a Covid infection and a groin injury at the start of the year, gave a wry smile as he admitted:

“I didn’t know if I’d get to play these kinds of matches again. Hopefully [Nadal and I] can put on a good performance for a couple of old guys.”

So what kind of shape is Nadal in, and how does the 20-time Major champion, now age 35, view the coming year? He began:

“It’s been crucial to be able to manage pain. It’s time to test it during the competition, and if I wasn’t feeling better, I wouldn’t be here.

“The comeback won’t be easy, I don’t have big expectations, but my only [one] was to be here, play in front of a great crowd again, to feel myself competing against great players, and enjoy. It’s been a really rough time for me. Just being here is great news and I hope I get better and better to be able to play at the level I want to be…”

He was asked about his place alongside his greatest rivals, fellow 20-Major winners, Djokovic and Roger Federer. He admitted that, while they may all be level in Majors at the moment:

“[Novak] has been competing every week almost, but for me and Roger, we have been injured for such a long period of time. I mean, of course we’re [currently] equal, but the chances for Novak are much higher than us. He is healthy, is competing and doing well. Let’s see what happens in the next couple of months. If I am back again, we can talk about that later in the season… In this sport, my experience says things change very quickly.”

He went on to talk about his imminent plans. He aims, if things feel good in Abu Dhabi, to head to ‘down under’ 20 days before the Australian Open begins to take in one ATP event in Melbourne ahead of the Open itself.

“I have been doing a great job at home, practising well, with the right attitude. I’ve been working a lot on my fitness. I have been able to do all these things despite my foot, so you never know what’s going on…

“I know it’s going to be super difficult for me as I am just going to play one tournament before Australia and two matches in Abu Dhabi. So the number of hours on court and the competitive level before such a tough and demanding tournament like Australia will be no match, but the main thing is always the same. I need to be healthy. I still have the interior fire to keep going and to fight.”

For now, once Abu Dhabi is over, he will head home to Mallorca to spend Christmas with friends and family—and “keep practising”.