Arsenal have decided to “push again” in their attempts to sign Arthur Melo from Juventus this month, according to Italian journalist Fabrizio Romano.

Italian reporter Romano claimed last week that the Gunners were looking at a possible deal to bring the 25-year-old Brazilian midfielder to The Emirates this month as Mikel Arteta looks to strengthen his squad.

Arthur has found his playing time at Juventus to be somewhat restricted this season, with the midfielder having only made four starts in Serie A so far this term.

Romano claimed last week that Arthur had been added to Arsenal’s list of potential candidates to sign a new midfielder this month but said that it was “not advanced” with Juventus.

Now, the Italian journalist has provided a fresh update on Arsenal’s apparent interest in Arthur, claiming that the Gunners have decided to follow up their pursuit of the midfielder and that the next seven days would prove to be “key” in how the situation turns out.

Posting on Twitter, Romano said: “There’s still nothing agreed for Arthur Melo deal. Next week will be key – Arsenal have decided to push again with Juventus, loan move not approved yet by Allegri.

“Juve board have not opened talks with Chelsea for Loftus Cheek as potential Arthur replacement, as of now.” 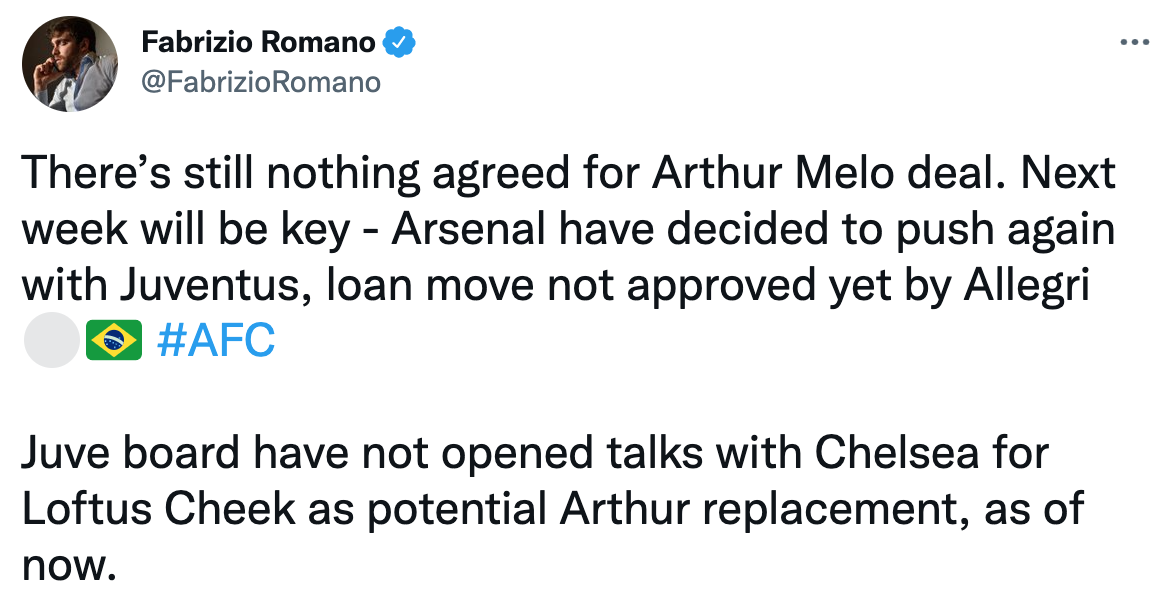 Meanwhile, Manchester United legend Gary Neville has hit out at Arsenal after the Gunners’ north London derby showdown against Tottenham Hotspur on Sunday was postponed.

Arsenal requested that the match be postponed due to a host of players being unavailable due to Covid-19, injuries and participation in the Africa Cup of Nations.

However, former England and Red Devils star Neville was less-than-impressed by the decision to call off Sunday’s clash in north London.

Posting on Twitter, Neville said: “Game off. What started out as postponements due to a pandemic has now become about clubs not having their best team.

“The Premier League must stop this now, draw a line in the sand and say all games go ahead unless you have an exceptional amount of CV cases. It’s wrong.”