The Gunners are being linked with a host of midfielders this month as the Arsenal manager looks to bolster his options in the middle of the park ahead of the climax of the top-four race.

Arsenal were linked with a potential swoop to sign Brazil and Lyon midfielder Bruno Guimaraes following the 24-year-old’s impressive performances in Ligue 1 this term.

Romano reported on 8 January that Arsenal were working on a deal to sign a new midfielder but the Gunners could be priced out of a move to sign €45m-rated Guimaraes.

The Italian reporter confirmed in a Twitter post that Arsenal had three players on their wishlist, including Juve midfielder Arthur.

However, Romano took to the social media website on Wednesday evening to provide a fresh update on Arsenal’s apparent interest in the 25-year-old former FC Barcelona midfielder.

Romano wrote on Twitter: “Arsenal will definitely go for a new midfielder. Arthur has been discussed internally as reported here days ago, he’s in board / Arteta list together with two more candidates – but it’s not advanced with Juventus yet. 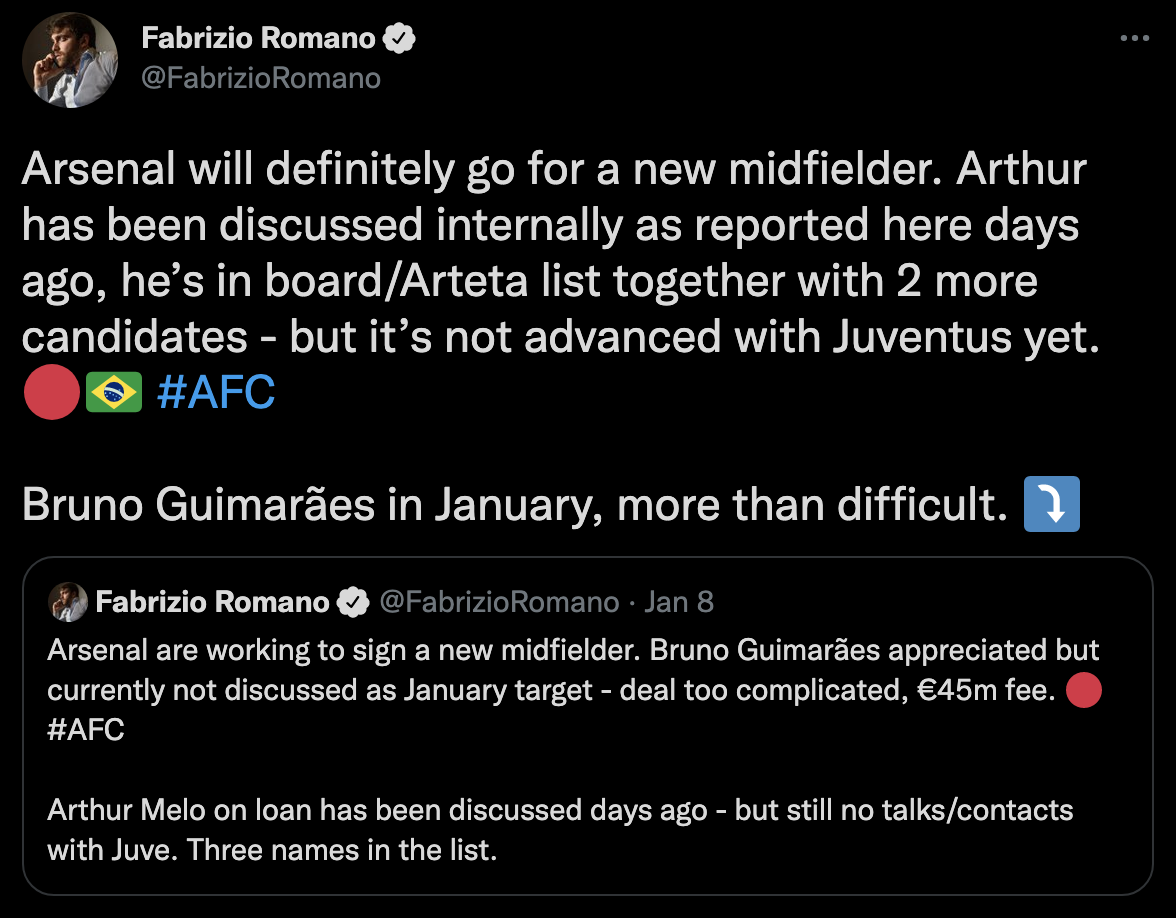 Arthur has scored one goal in 45 games in all competitions since his move to Juventus from FC Barcelona in 2020.

The Brazil international netted four times in 72 outings for the Spanish giants before he was sold to Juventus and signed a contract worth a staggering €82m over five years.

Arthur has fallen down the pecking order at the Italian giants this term after the Old Lady signed Euro 2020 star Manuel Locatelli from Sassuolo in the summer.

Eurosport journalist Carlo Filippo Vardelli explained what type of player Arsenal would be signing if the north London side do manage to strike a deal with Juventus for Arthur.

“Arthur is a half-winger who focuses on possession and passes that start an attacking phase,” Vardelli told Eurosport.

“He knows how to lower himself when receiving the ball, making him tough to intercept or tackle, and as a result he rarely loses possession.

“He has improved both in his long passing game and in his reading of the game without the ball, and he could certainly get excited by Arteta’s setup.”

Arthur began his professional career at Brazilian side Gremio and scored six times in 70 games before FC Barcelona signed the Brazil international in a €40m deal in 2018.

Journalist: Man United have made offer to agents of 25-year-old midfielder