Young Canadian friends admit: “We really trusted each other along the way, and it came down to the perfect result”; Plus other results Down Under, including Nadal and Halep 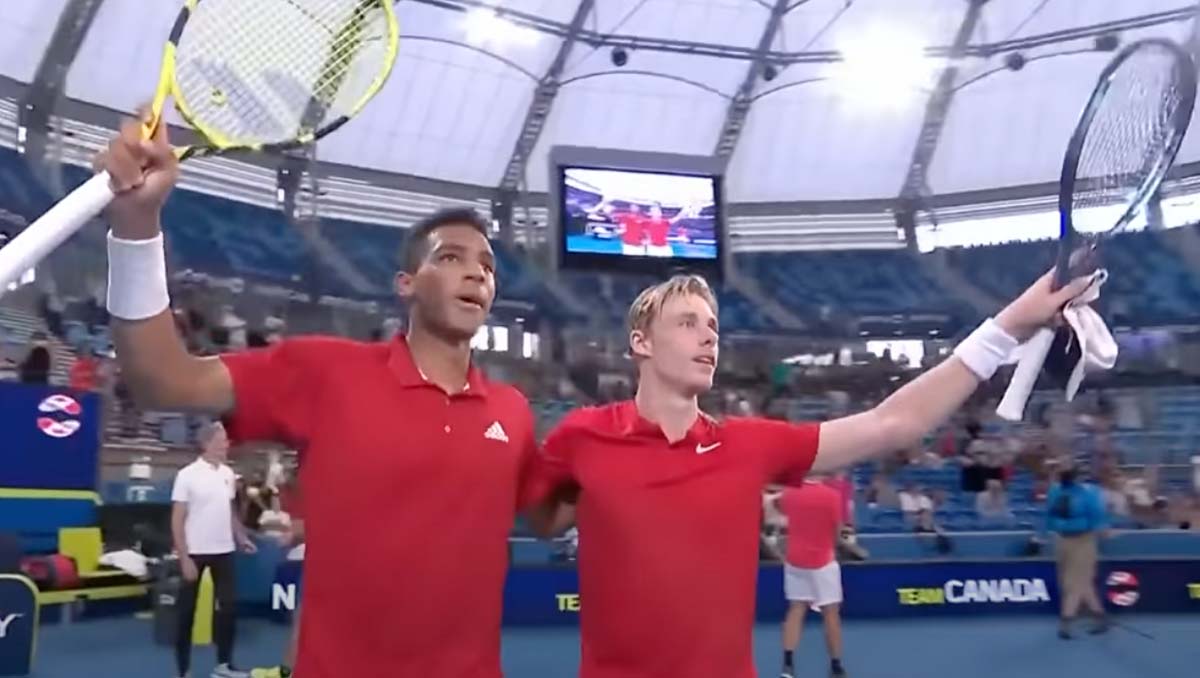 It probably surprised nobody that Spain emerged from the group stages to reach the semis of the ATP Cup this week in Sydney, even without Rafael Nadal in the line-up.

With two former top-10 stalwarts like world No19 Roberto Bautista Agut and No20 Pablo Carreno Busta in their corner, and with considerable expertise in their doubles line-up, their progress to the knock-out stage was a done deal almost from Day 1.

Not that there had been much for the doubles team-mates to do: Both 30-something Spaniards won all four of their singles matches, and the team dropped only one point in the nine matches played to seal their semi-final place.

By the time they reached the final via Poland, the same two men had won two more singles matches, and had a day in hand before the title bout.

Spain had been here before, missing out to Serbia in the 2020 final, but their team strength and depth had earned no fewer than six Davis Cup titles since 2000. Compare and contrast that with the youthful Canada squad, whose two star players, 21-year-old Felix Auger-Aliassime and 22-year-old Denis Shapovalov, two young friends who were not far short of their career-highs of No10, had taken Canada to the Davis Cup final once—losing to Spain, it so happens.

A whole decade younger than their Spanish opponents, then, they had also made an inauspicious start to the tournament. First, Shapovalov arrived in Australia and promptly tested positive for Covid: He was not ready to play his opening singles match, and Canada lost their first tie to the USA, 3-0.

In the second tie against Great Britain, Shapovalov lost to an on-fire Dan Evans, but then joined with Augur-Aliassime to win the doubles and the tie. And such was the team ranking ahead of the third round that they had only to beat Germany to reach the semis—and they did just that, including a win over world No3 Alexander Zverev for Auger-Aliassime’s first top-five win.

The Canadian pair, then, were buoying each other up, though the younger man was brought down to earth with a bump in a 69-minute defeat by world No2 Daniil Medvedev in the semis. He bounced back to partner his friend for a tight win in the doubles and a rematch against Spain, albeit in a different team competition.

So while the two Spanish men had played and won four matches apiece, the Canadians had played six and seven, having also combined in three of the four doubles matches.

First up were the No2 players, Shapovalov against Carreno Busta, who had a 4-1 advantage over the Canadian in previous matches, including a five-set win in their last, the 2020 US Open quarter-finals. What is more the Spaniard had not lost a set all week in Sydney, but he was about to see that change in dramatic fashion.

Not that Shapovalov did not have to dig deep right from the start, saving five break points and surviving eight deuces to hold the opening game. He later admitted: “I felt much more comfortable after that first hold.”

He went on to break the Spaniard’s defence at the key stage to take the set, 6-4, and then got the early break in the second set. Carreno Busta broke back to serve at 3-4, but Shapovalov continued to go for his shots, and broke again. This time he made no mistake, serving out the win, 6-3 in an hour and 40 minutes.

Now it was his friend’s turn to try and seal the title against one of the most resilient, fit and astute men on the tour, Bautista Agut.

And the Spaniard drew first blood with a break in the second game, but in what was already turning into a battle royal, Auger-Aliassime broke back in a long, hard game that averaged 15 shots a rally.

The Canadian was tested again in a 10-minute hold, to take the score-line to 2-2 after a gruelling 26 minutes, and the quality and intensity only grew, with winners flying from the baseline. Bautista Agut uses angles with superb accuracy and penetration, but the Canadian faced down five more break points in the eighth game and produced some outstanding serving to finally hold with a net finish, 4-4.

The set seemed to be taking a toll on the Spaniard, who now faced repeated break points of his own. Yet the gritty Bautista Agut held, 5-4, as the clock hit one hour. The last two games had lasted 20 minutes and had seen eight break points saved, so it went, almost inevitably, to a tie-break.

There, the Canadian forehand broke down the speed and footwork of the Spaniard to take a 4-1 lead. The young player’s brilliant tennis deployed the off-forehand to stretch his opponent into wider and wider backhands and it earned four set-points. After almost an hour and a half of pulsating tennis, he served it out, 7-6(3), with 24 winners to his credit.

Both men were drenched in the humid, under-the-roof conditions, but began the second set in the same vein. Bautista Agut could not convert two early break chances, and the disappointment showed. He served himself out of trouble for 2-2, but how much did his 33-year-old body have left in this must-win match?

The Spaniard was quickly serving again after a love hold by Auger-Aliassime, and again at 3-4. Eventually, he could no longer keep up with the pace and depth of the Canadian forehand, and was broken: Auger-Aliassime would serve for the title.

After more than two hours, he did just that, 6-3, and so claimed his first ATP title after falling at the final hurdle eight times before. But this one was extra special: a first team title for his country, too, and Shapovalov was the first to hurtle onto court to hug his friend.

“The emotions are unbelievable… We came back from far in this competition, losing our first four matches. But we never stopped believing. I think that’s very important. We trust each other to the highest level. Denis and I, everybody in the team—Brayden [Schnur] played in singles, Steven [Diez] played in doubles—they’ve been supporting us all week. They’ve got a tournament next week, but they’re here every day ready to practise, ready to support us.

“All their egos are aside and we really trusted each other along the way and it came down to the perfect result.”

The win takes Auger-Aliassime to a new high of No9, and there was a significant rise for Bautista Agut, too, to No16, which helps him avoid higher-ranked players before Round 4 at the forthcoming Australian Open.

Other results in Australia

· Rafael Nadal returned from five months away with a foot injury to win the Melbourne ATP250 against Maxime Cressy, 7-6(6), 6-3. It is the Spaniard’s 89th title, and his 19th straight year with at least one title.

· Simona Halep won her 23rd title at the Melbourne Summer Set 1 WTA250 with a 6-2, 6-3 win over Veronika Kudermetova. Her 2021 season was disrupted by injury: Halep finished just nine tournaments. She now rises back inside the top 16 for the start of the Australian Open.