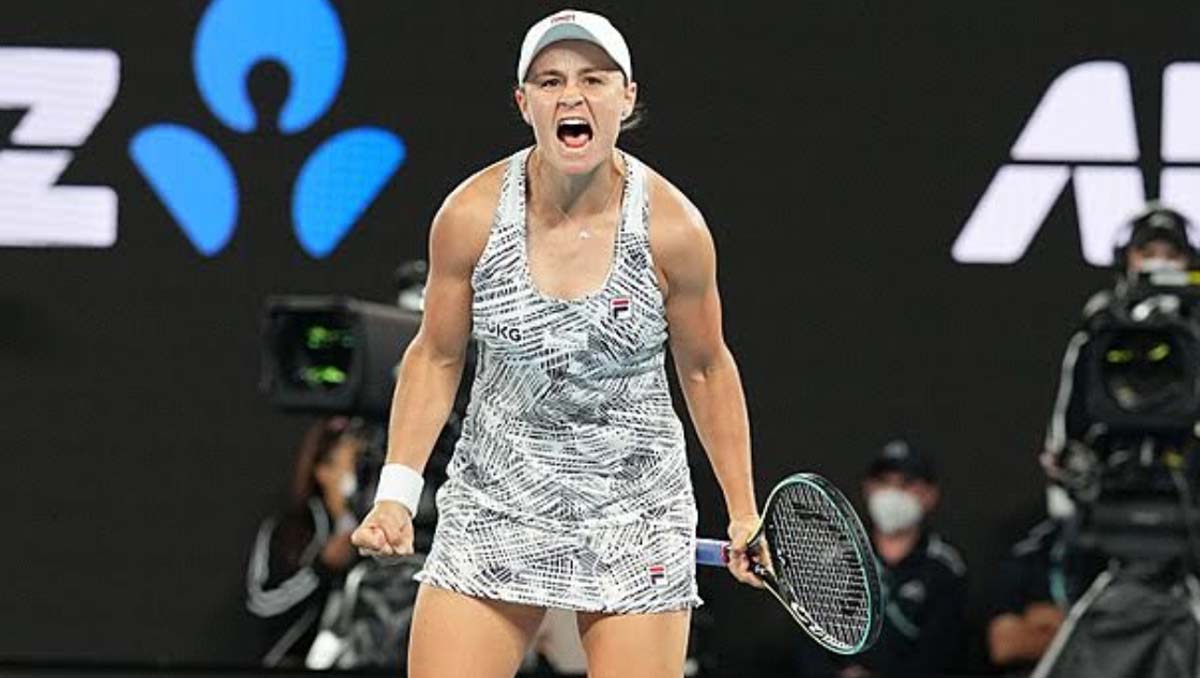 Wherever world No1 Ashleigh Barty plays her special brand of creative and crafty tennis, she is admired and cheered.

But in Australia, the love and pride for the unassuming figure who walked onto the Rod Laver Arena to try and make history burst through the open roof to the Melbourne sky like champagne from a bottle.

Her history is familiar to all tennis fans. Ten years ago, she made her main-draw debut at the Australian Open as a 15-year-old, established a glittering doubles career, but then walked away for two years, having won just two singles matches in nine Major draws.

After a brief, successful career in cricket, she was tempted back to tennis by her former doubles partner Casey Dellacqua, with whom she had reached the final in three Majors in one season, 2013. And it was in doubles that the 22-year-old Barty scored her first Major title, at the US Open in 2018, with Coco Vandeweghe.

The Australian was now demonstrably a more content person and experienced player, and singles success beckoned, with her first big run coming, of course, in Australia—a quarter-final run in 2019. But it was at Roland Garros that she won her first singles Major that same year, earning her the No1 ranking, and it was followed by Wimbledon after the coronavirus hiatus last year.

She had maintained at least the quarters in Melbourne throughout, reaching the semis in 2020, but Barty stayed true to her resolution to make sometimes tricky choices about when to play and when to return home. She did just that after the US Open last year, heading back to family and friends for a break before her assault on the Australian Open swing this month.

It bore immediate fruit: her 14th singles title came in Adelaide, along with her 12th doubles title at the same event. She was primed for the biggest title of them all, her home Major in Melbourne, where she was guaranteed to remain world No1 for 113 weeks.

And what a run to the final she had, conceding just 21 games and dropping serve only once, against Amanda Anisimova in the fourth round—thus far the only player to take Barty to a 6-4 set.

That, then, was the mountain that American Danielle Collins had to face in her first Major final. Not that the 28-year-old had the look of a woman intimidated by her opponent or the overwhelming Australian support. Her performance in beating Iga Swiatek in the semis proved her to be a powerhouse in her tennis and her mindset.

She had made a bold, brave return from adversity, too. Having reaching the Australian semis in 2019, she faced considerable health challenges, and had surgery for endometriosis less than a year ago. But since then, from a ranking low last July of 49, she had won to titles, made two more semis, and won all three singles rubbers in the Billie Jean Cup in November. The top 10 beckoned, but so did the cauldron of the Rod Laver Arena.

And if the stature of a sporting event can be measured by the stature of those watching from the front row, there was no getting away from it: this was big. Front and centre, as he had been for Barty for the whole fortnight, was Rod Laver himself. Also there was the last Australian to win the title, Christine O’Neil, 44 years ago. There were Olympic champions Cathy Freeman and Ian Thorpe, plus the Gladiator himself, actor Russell Crowe.

They, and the 12,000 fans fortunate to get tickets, were cheering before a point was played, but they had a wait before they could truly unleash their joy.

There was nothing between the players in the first four games, barely a serve dropped, both testing and probing. The first deuce of the match came in the fifth game, and then a break point against Barty, for as soon as she missed her first serve, Collins was onto it in a flash. Barty saved it with a signature forehand looped wide onto the side-line, and then aced.

The volume in the arena as she came through the threat was already cranked to high, and one could only imagine the effort required by Barty to keep her thoughts free and her body relaxed.

But for all Collins’ cool, firm demeanour, she too must have felt the weight of the moment: Barty immediately got a break chance in return, and the American double faulted: 4-2. An easy hold by the home player, and Barty was on the front foot, 5-2. With barely half an hour on the clock, she went on to serve it out to love, 6-3—enough for the arena to unite in a standing ovation.

The second set began with another ovation, as Barty swung the American to both extremes of the court to win the first point. But Collins stayed calm, stepped in, and held confidently, before striding to the other end of the court.

She was ready to take advantage of any opening, and three uncharacteristic errors from Barty brought up two break points. The Australian aced on the first, but Collins unleashed her forehand and broke with a smash winner, 2-0.

The next game brought errors on both sides, not least from Barty on two break-back points, including an easy volley that she would normally put away in her sleep. It took her five minutes, but Collins held, and was now roaring herself on with every winner.

Barty had to regroup, and she did so with a love hold, but her problem was that Collins had now uncorked her free-hitting game, and a string of winners took her to 4-1.

The Australian had tightened up for the first time during the entire tournament, double faulting twice, and firing a forehand drive long for two more break points. She netted a backhand to concede another break, 5-1, and looked a shadow of her usual self.

It was time to refocus, rethink, and let the crowd play their part. And sure enough, the momentum began to swing back, with Barty at last finding some rhythm on her forehand. She broke, and then broke again, now a forehand winner, now a sliced backhand to the line to draw an error. The Rod Laver Arena could hardly contain itself, and Collins had a word with the umpire.

Barty was back into chip-and-charge mode, holding with an ace for 5-5, but Collins proved her grit with some pin-point serving and patient rallies.

Barty then faced 15-30, 5-6, but she found her serve at the crucial moment, and held to set up the first tie-break that either woman had played in the tournament.

And the first point went against serve to Barty, followed by a forehand winner for 3-0. A drop-shot and smash made it 4-0, and elicited a rare fist-pump from the Australian. They changed ends at 5-1, then a long, patient, pin-point rally made it 6-2 to Barty. And she finished in style with a forehand pass, her 30th winner of the match, 7-6(2).

Now Barty, for the first time this fortnight, allowed herself a roar of delight and relief, but after raising her hand in thanks to the crowd, she reserved her first hug for Dellacqua.

Barty may have become the first Australian singles champion in 44 years, but it would not be O’Neill who presented the trophy. Instead, it was the last Aussie woman to reach No1, and the player who Barty has most admired her entire career, Evonne Goolagong Cawley.

It was only left for Barty to address her box and her adoring crowd:

“To my team, wow! I have said numerous times I am so lucky to have so many people here who love and support me. Mum, dad and my sisters, I am an incredibly fortunate and lucky girl to have so much love in my corner.

“As an Aussie, the most important part of this is being able to share it, and you guys have been nothing short of exceptional. This crowd is one of the most fun I have ever played in front of—you relaxed me and forced me to play my best tennis! Against a champion like Danielle, I had to bring that today.

“This is a dream come true for me, and I am so proud to be an Aussie, so thank you so much everyone—we will see you next time!”

As if all that was not enough for the home nation, the men’s doubles final guaranteed another Australian victory, as Nick Kyrgios and Thanasi Kokkinakis took on Matthew Ebden and Max Purcell.

But for now, it was all about Barty: Surely one of the world’s most popular champions.

Kyrgios and Kokkinakis went on to beat Ebden and Purcell, 7-5, 6-4