No1 Barty next plays Jessica Pegula; Krejcikova and Sabalenka still in chase for top spot 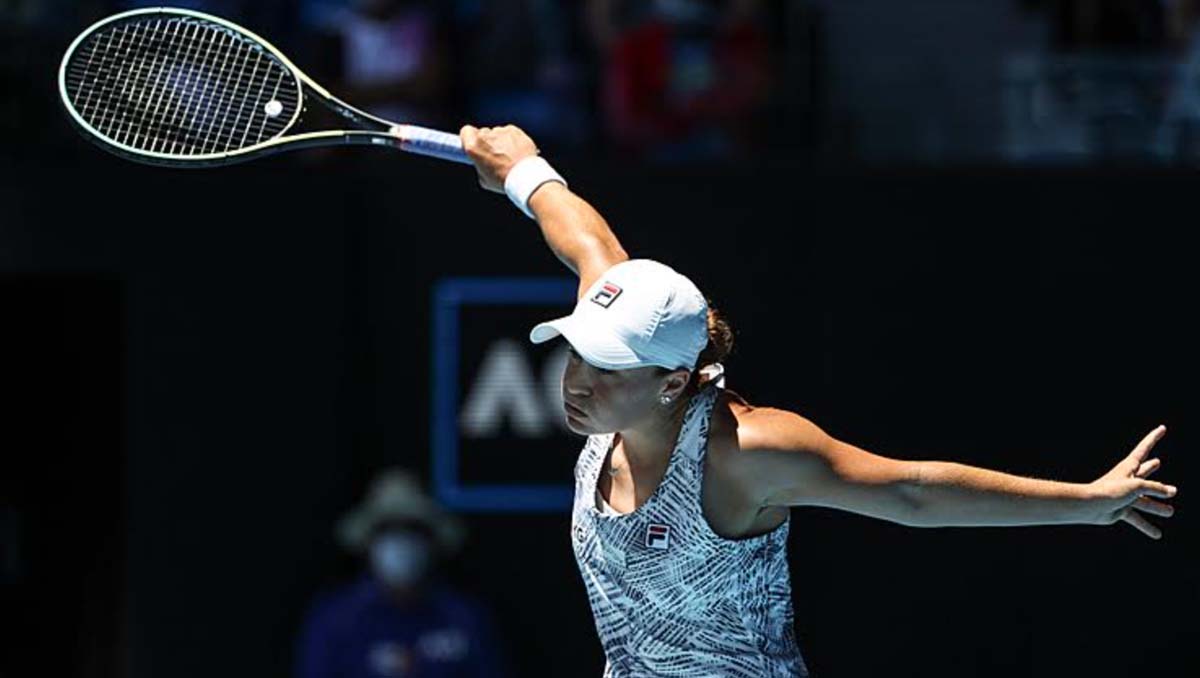 Ash Barty and Amanda Anisimova had met only once before, back in the semis of the French Open in 2019.

The tall and powerful Anisimova was just 17, and recently with her first tour title in Bogota. Barty, only just turned 23 herself, had won her first title two years before, and was on a surge up the ranks to No8 as she came into Roland Garros.

The Australian would go on to win her first Major in Paris, but not before Anisimova took her to three compelling sets. And from there, Barty went on to claim the No1 ranking weeks later, slipping from that position only briefly later in the year.

But by the time these two played each other for the second time, two and a half years later, a lot of water had gone under the bridge.

Barty arrived at the Australian Open with 112 weeks clocked up as No1, as reigning Wimbledon champion, and already with the Adelaide title this year. She had dropped only eight games in her three matches thus far, and had been unbroken for 58 consecutive service games.

The American, now age 20, was also fulfilling all that early promise, though she had endured some serious setbacks in the interim, including the death of her father.

Of course, 2020-2021 was challenging for all players as the global pandemic took a hold, and Anisimova was one of the unfortunates to contract the virus. But from a low of 86 during the Rogers Cup in August, she began to work back to form, and she too came into the Australian Open with a title, in the Melbourne Summer Set, her first title since Bogota almost three years ago.

As if that was not impressive enough, the American’s tennis this week had shown just what a force she was becoming. First she beat Olympic champion Belinda Bencic, and then took out the defending champion Naomi Osaka in a thrilling three-setter that was decided in a final tie-break after Anisimova saved match points.

Her bold, first-strike tennis, big serving, and fearless baseline hitting had out-done the similar style of Osaka. But Barty posed a very different set of questions, combining as she does pin-point accuracy on serve, smothering slice, poised and pacy footwork, and a sharp, quick-thinking tactical brain. She is a player who can defuse an opponent with guile, variety and, it goes without saying, a complete set of ball-striking skill.

The world No1 was straight into her stride, challenging the American’s serve to bring up break point. Anisimova resisted in characteristically aggressive style, and then worked her own break chance in the fourth game. Barty came through with calm precision, and forced two more break points and three deuces, but the American’s impressive serving halted the Australian’s charge.

A love hold later, and Barty was at her tactical best in the key seventh game, returning the serve wide and moving forward to slice the next ball away to the opposite corner: clean, smart, effective, and the repeated tactic earned her three break points.

Anisimova made a couple of huge winners to close out two of them, but Barty converted the third for the first break, 4-3. However, the American was increasingly finding her confidence and range, and a couple of winners gave her a break-back point. She went for broke and missed: Barty led 5-3.

Serving for the set, all of Barty’s tactical skill and variety came to the table for a love hold in barely a minute, an ace here, a forehand winner there, and the calmest woman in the Rod Laver Arena led, 6-4.

Now the Barty speed and quick-thinking worked her back from 40-0 to deuce in the first game of the second set, as she chased down and absorbed the pace of Anisimova, and she had break point. But again, the American’s formidable serve saved the day, and she then turned the attack onto the Barty serve, returning at the Australian’s feet with depth and pace, and drawing errors in reply. All at once, Anisimova had break points, and a scrambling Barty could not respond as the American pounded forward to finish with a winner, 2-0.

With the break came the end of Barty’s remarkable run of 63 service holds. Was this match about to switch direction just as Anisimova’s had against Osaka?

While the American’s serve held firm, her follow-up forehand did not, twice missing the line and handing back the break as Barty continued to probe with her sliced backhand.

The Australian again faced break point, but aced on a second serve to save it. A superb forehand down the line held for 2-2, and all the American could do was gaze in disbelief.

From there, it was the work of minutes for Barty to hold and then break again, as the resolve and focus of the young American buckled. Facing match-point, a huge forehand went long, 6-3, and the Rod Laver Arena, including Laver himself in the front row, rose to cheer their star.

Asked how she seemed to take the rocking atmosphere in Melbourne in her stride—and she is now the only Aussie singles player left in the draw—she said simply:

Her two years away from this pressure-cooker environment while still a teenager have served her well, after admitting to Cricket.com.au that her early stardom in tennis was overwhelming:

“It was too much too quickly for me as I’ve been travelling from quite a young age… I wanted to experience life as a normal teenaged girl and have some normal experiences.”

She continues to play where and when she wants to do so—she did not play between the US Open and Adelaide this month—and is now the favourite to stave off challenges to her No1 ranking from French Open champion Barbora Krejcikova and world No2 Ayrna Sabalenka, though the former dismissed the two-time Australian champion Victoria Azarenka, 6-2, 6-2, to reach a quarter-final against unranked Madison Keys.

The American Keys, a runner-up at the US Open in 2017, has regained a rich vein of form after opening 2022 with the other Adelaide title last week. Injury interrupted her progress after a breakthrough run as a teenager to the semis at the Australian Open in 2015, but her win over world No6 Paula Badosa, 6-3, 6-1, confirms that she is again a dangerous presence in the quarter-final mix.

Barty will next play another American, Jessica Pegula, seeded 21, who beat No5 seed Maria Sakkari, 7-6(0), 6-3. Pegula was another of Barty’s victims in that title-run in Roland Garros 2019, but the American also made the quarters in Melbourne last year with wins over Azarenka and Elina Svitolina.