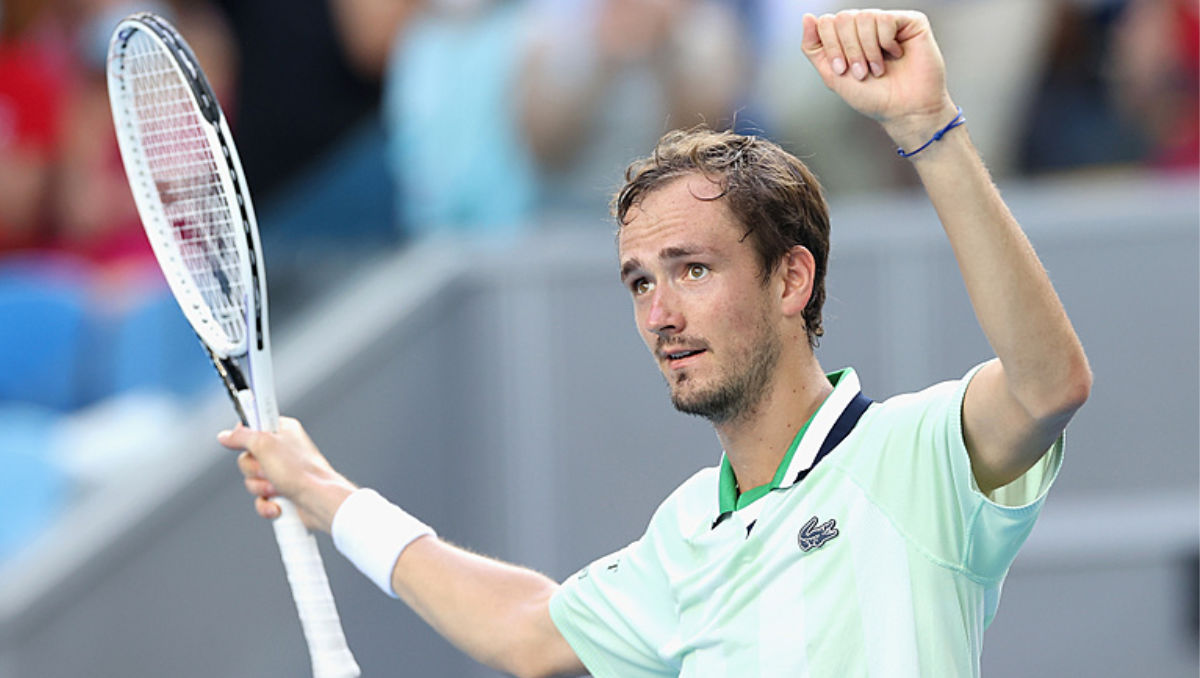 Certainly there had been memorable performances at this year’s Australian Open.

There was the resurgent and very popular Gael Monfils very nearly making the semis, too, before losing out to Matteo Berrettini in five. And the Italian’s compatriot, fresh-faced 20-year-old Jannik Sinner made his first Australian quarter-final, while serve-and-volley Maxime Cressy reaching his first Major fourth round.

But in the end, and not for the first time, it was the top men who battled through their draws to the sharp end of things.

It may not have been No1 and nine-time champion Novak Djokovic, who was forced to leave Australia before a ball was played. It may not have been Roger Federer, who with six titles and 102 wins at the tournament, was been unable to make the trip at all after double knee surgery.

And Andy Murray, five-times the runner-up, may have made it back with a replacement hip for the first time in three years, but his gutsy five-setter over No21 seed Nikoloz Basilashvili was the limit of his run.

It was, then, just Nadal who kept the flag flying for the former ‘big four’, and surrounded by three of the eight 25-and-under players currently packing the top 10: No2 Daniil Medvedev, No4 Stefanos Tsitsipas and No7 Matteo Berrettini.

Nadal, of course, won the Australian Open in 2009, one of five runs to the final. The long-time No1 was now in pursuit of the record 21st Major that would separate him from rivals Djokovic and Federer on 20 apiece. Still ranked at No5, he had become, against the odds, the favourite for the title: After all, he had won just one of only two matches played since suffering injury at last year’s Roland Garros.

And all his old passion, physicality, self-belief, and a valuable three-day gap since his gruelling five-set quarter-final, ensured a victory over the Wimbledon runner-up Berrettini, a man 10 years his junior, 6-3, 6-2, 3-6, 6-3.

Indeed the first two sets suggested this would be a whitewash, as Nadal’s aggressive leftie tactics kept pounding his infamous forehand to the Berrettini backhand. The modest Spaniard even conceded after the match:

“The first two sets were some of the best I’ve played for a long time.”

He opened the first two sets with a break and a 3-0 lead, and although the big Italian worked his first break chance of the match to take a 5-3 lead, and then consolidated with a love hold for the third set, Nadal was relentless in the fourth.

At the first glimmer of a chance, a scattering of errors from the Italian in the eighth game, the Spaniard broke, and swept through a hold for set and match, 6-4, after just under three hours.

This 500th hard-court win took Nadal to a 29th Major final, where he will ready himself for an assault on that record-making 21st Major. But in his way will be the man who denied Djokovic the same record at the US Open five months ago, Medvedev.

And if Nadal had become the favourite by the time he reached the final in Melbourne, Medvedev had been the favourite when the tournament began. He was runner-up to Djokovic in Melbourne a year ago, before joining a very exclusive club of men’s Major champions in New York. In 2021, he won more matches than any other player, and ended the season by leading Russia to Davis Cup victory. 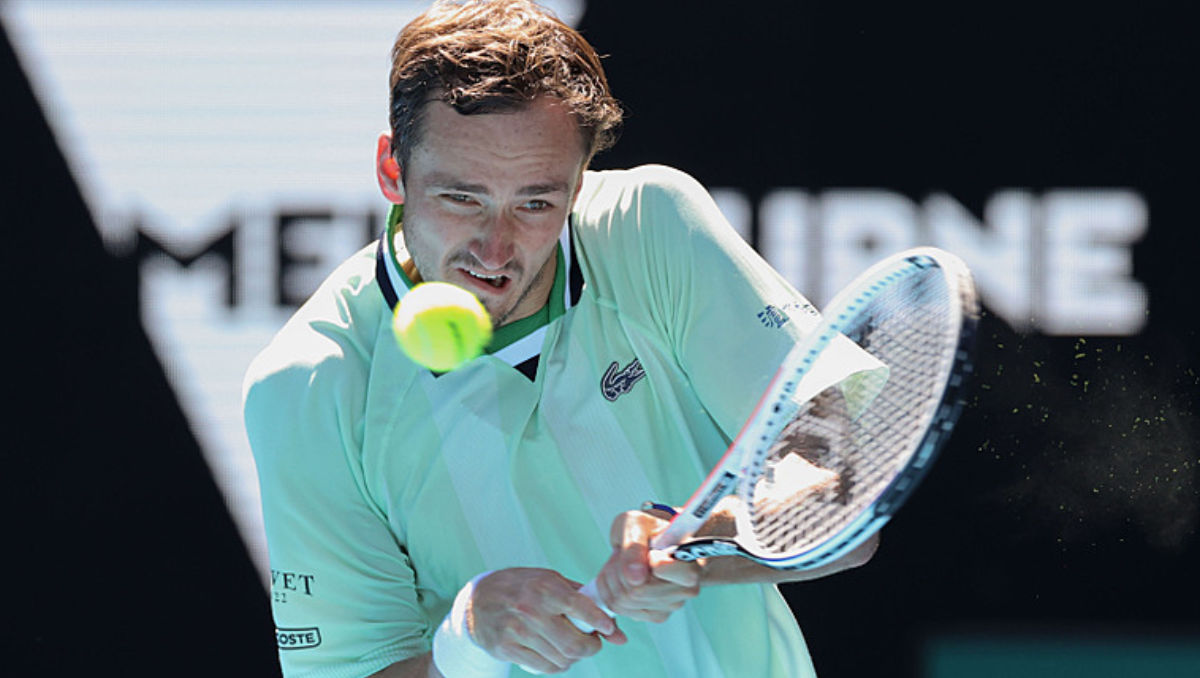 Now he took on Tsitsipas for the seventh time in what was becoming a fascinating rivalry. Medvedev beat the Greek in last year’s semi-final, but Tsitsipas then beat Medvedev at the French Open on his way to his first Major final. The 23-year-old Greek had also reached the semis in Melbourne twice before.

A sign of just how close this would be came in the string of love holds in the first set. Tsitsipas seized the first point with a deft touch volley winner, Medvedev made hay with his piercing serve. The Greek opened his second service game with a drop-shot-lob play: He had determined, it seemed, to keep his opponent running. After all, Medvedev had survived four and three-quarter hours in his quarter-final.

And so it went: two more love holds, with the first point lost on serve caused by a net cord. By 4-4, and 20 minutes in, only one more point had been dropped by the server, again by a net cord. The ninth game, though, finally saw a slight opening for Medvedev, 0-30 courtesy of a backhand pass against a serve-and-volleying Tsitsipas. Then a rare long exchange of 34 shots was also picked off by a Medvedev winner: Suddenly three break points.

But Tsitsipas stayed bold, moved forward, reached deuce, and then saved a fourth with a 130mph serve. Two more love holds, and Medvedev had dropped just one serving point as they headed to the tiebreak.

There, though, he quickly dropped his second point, while Tsitsipas threw in short and angled balls to take the early initiative. The Greek led 4-2 at the change of ends, but Medvedev pulled that stray point back with a threaded forehand pass, 4-4, and it was the Russian who earned the first set point with another backhand winner. A rare forehand error from Tsitsipas delivered the set, 7-6(5).

The Greek shrugged it off in some style, running Medvedev ragged with his aggressive tactics, side to side, forward and back, and earned his first break in the first game of the second, consolidated by a quick hold with an ace: 2-0.

But after two love holds, Medvedev turned the pressure on the Tsitsipas serve, drawing errors for four break chances, and levelled. However, suddenly the Russian threw in a poor game boasting two double faults and a wild forehand, leaving Tsitsipas the chance to serve out the set. But not before Medvedev entered a furious exchange with the umpire about coaching from the Tsitsipas box. However the Greek rose to the occasion to fend off deuce, 6-4.

Medvedev had another exchange with the umpire as he headed off court for a change of kit, and came back to make another wild double fault for two immediate break points in the third set. This time, he remedied the situation with aces for a hold, and things settled for a few games.

Then came a pivotal charge from the Russian—increased pace, a drop shot, two winners for three break and set points, and he picked off a rare smash to force the error, 6-4.

There was another winner of sorts for Medvedev early in the fourth set, a warning to Tsitsipas for coaching—picked up, it seemed, by a Greek-speaking umpire courtside. Medvedev gave nothing away in his expression, but must surely have smiled inwardly. In any case, he held for 2-1, and promptly took advantage of a first double fault from Tsitsipas. 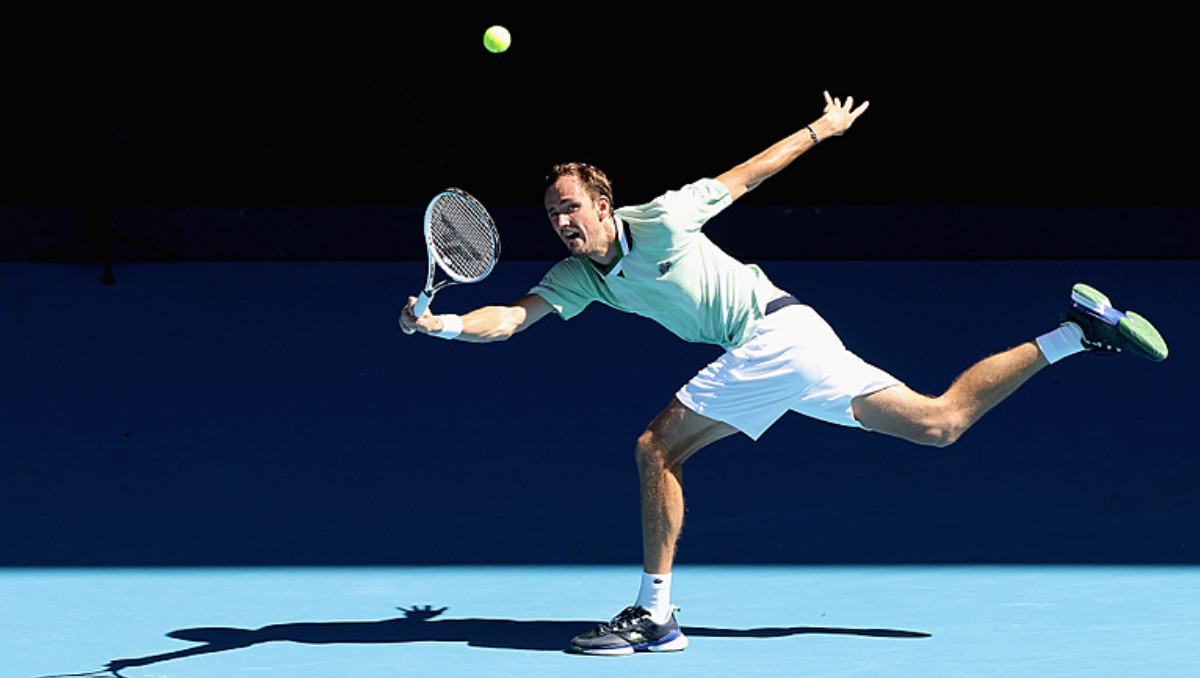 Medvedev upped the attack on return of serve to break, held with ease 4-1, and now with the bit between his teeth, he broke again. It was a thrilling conclusion by the world No2: Three straight backhand passes down the line and he had victory, 6-1.

The handshake was cool, but Medvedev then apologised to the umpire as he headed to his chair, as always unfazed by the fans’ negative take on the result. Indeed, Medvedev often seems to relish the adversity, turning it into humour with a twinkle in the eye, and interviewer and former champion Jim Courier fed into the moment.

Asked about his emotions, Medvedev grinned:

“To be honest I don’t think bad emotions helped me too much. As soon as I’ve done it, it was a big mistake. I managed to re-concentrate and pulled out some serves and that got me back into the match—it’s a quite important match I think.”

For next he will try and deny one of the ‘20 Majors’ triumvirate for a second time:

“I guess last time Rafa was watching [when I beat Djokovic]… I guess Novak will be watching in two days’ time also.”