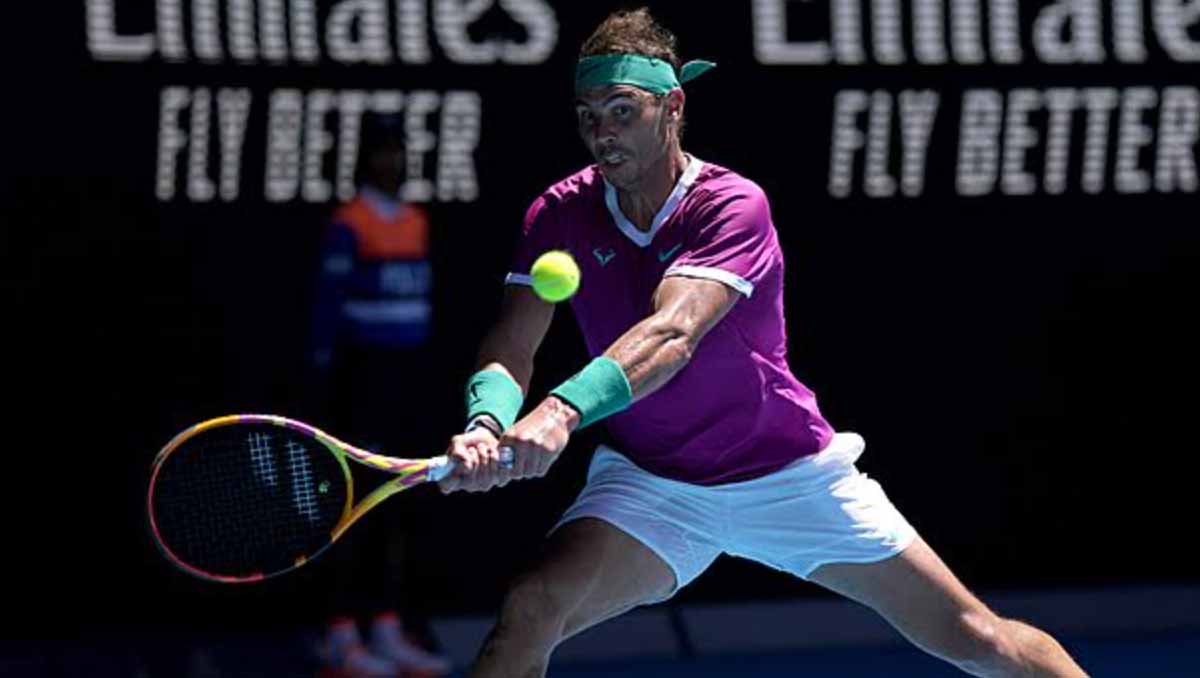 And so to the quarter-finals at an eventful Australian Open.

With no defending champion Novak Djokovic at the top of the draw, the favourite became instead No2 Daniil Medvedev. He is, after all, one of a rare band of men to have become a Major champion in the era of the triumvirate of Djokovic, Rafael Nadal and Roger Federer.

In the last 15 years, for example, no-one but these three won this tournament except Stan Wawrinka, back in 2014, and he was now absent with injury—as was Federer, still trying to work back from double knee surgery.

So it came down to Nadal, the 2009 champion, to keep the old campaigners’ flag flying, yet he had played only two matches, winning one, since last year’s French Open as he nursed a foot injury. But to Melbourne he returned, after coming through a Covid infection, and was straight back into winning ways, albeit not against the very top players: All three matches for the Melbourne Summer Set title were against men ranked 95 or over.

It clearly warmed him up nicely for what opened into a decent draw for the No6 seed. He reached the fourth round via one seed, No28 Karen Khachanov, the only man to take a set from the Spaniard—though a gutsy effort from left-hander Adrian Mannarino came within touching distance of grabbing the opener set, 6-7(14).

Nadal’s win took him to his 45th Major quarter-final, where he aimed to reach his 36th semi-final, and ultimately break his deadlock with those rivals Federer and Djokovic on 20 Majors apiece.

Last year, he was thwarted at this very stage by the 22-year-old Stefanos Tsitsipas in five sets despite holding a 2-0 lead. This year, he would face a near identical scenario against the 22-year-old Denis Shapovalov.

The expressive and explosive tennis of the young Canadian had scored some big victories in the course of his short career, among them a win over Nadal as an 18-year-old at the Montreal Masters in 2017. His progress since had been unpredictable and inconsistent, but he was now into his third Major quarter-final, and looking to emulate his Wimbledon semi run last summer.

Certainly he had proven his quality with wins over No23 seed Reilly Opelka and then No3 seed Alexander Zverev, but could he carry that form into the ultimate test, the best-of-five, centre-court bull-ring with Nadal?

It would certainly take five sets, and it would last more than four hours in a match full of intrigue, drama and passion. And it looked as though it would follow a similar path to last year’s experience-versus-youth battle with Tsitsipas.

Nadal again won the first two sets, 6-3, 6-4, needing just one break in each and offering up no break points in return. Nadal had made more winners and fewer errors than Shapovalov, but in the second set, the Canadian was making more chances, and extended the 10 games to an hour—though as he pointed out afterwards, Nadal uses every available second between points, even on receiving games, to make games particularly long.

It pricked Shapovalov into complaints to the umpire at the time delays when Nadal left court to change kit, but the Canadian came back with some spirit. He served better, got more winners on the board, and tussled through some long and testing games to finally get a deserved break to take the third set, 6-4.

The charge continued with an earlier break in the fourth set. Leading 4-1, there was an extended break again as Nadal was assessed for a stomach issue by a medic, but even so, Shapovalov had to fight off break points as he served for the set. He strung together two aces and two winners to level the match, 6-3.

More treatment off court for Nadal, and they embarked on the decider, and Nadal soon reasserted himself on the match after Shapovalov failed to take advantage of break point in the first game. A couple of tight errors, and the Canadian faced three break points, and Nadal converted the third when Shapovalov made another error, 2-0.

It took the Spanish former champion almost 10 minutes to hold the third game, facing down two break points and three deuces with a string of winning plays: Shapovalov would not get another chance. Nadal dropped just four more points on serve, sealing the match, 6-3.

It was a popular win, and the former champion celebrated in exuberant style, before explaining:

“We can create history but the real thrill is that two months ago we didn’t know if we could be able to get back on tour. For me, this is a present of life to be playing tennis again and I am just enjoying it.

Of his age, he stressed:

“I am not 21 anymore, after this match it is great to have two days off.”

He was not the only 35-year-old playing for a semi-final place. No17 seed Gael Monfils is just three months younger than Nadal, and he too found himself in a five-set thriller against No7 seed and Wimbledon runner-up, Matteo Berrettini.

Monfils had yet to drop a set in reaching the quarters, and had fans in Melbourne cheering his spectacular brand of tennis. In contrast, Berrettini had spent almost five more hours on court, beating No31 Carlos Alcaraz in a blistering five-setter along the way.

These two had played at the same stage of the US Open in 2019, and the Italian—still only 25 years old—recorded a memorable victory in a final-set tiebreak to reach his first Major semi.

No1 seed Ash Barty beat No21 seed Jessica Pegula, 6-2, 6-0 in just 63 minutes, and will play unseeded Madison Keys, who beat No4 seed Barbora Krejcikova, 6-3, 6-2, in the semis. Barty is now guaranteed to retain the No1 ranking after the Australian Open

Fabrizio Romano: Liverpool FC have been tracking 19-year-old ‘for months’