Beats Daniil Medvedev in five sets to complete second career Grand Slam: “Without doubt it is one of the most emotional wins of my career” 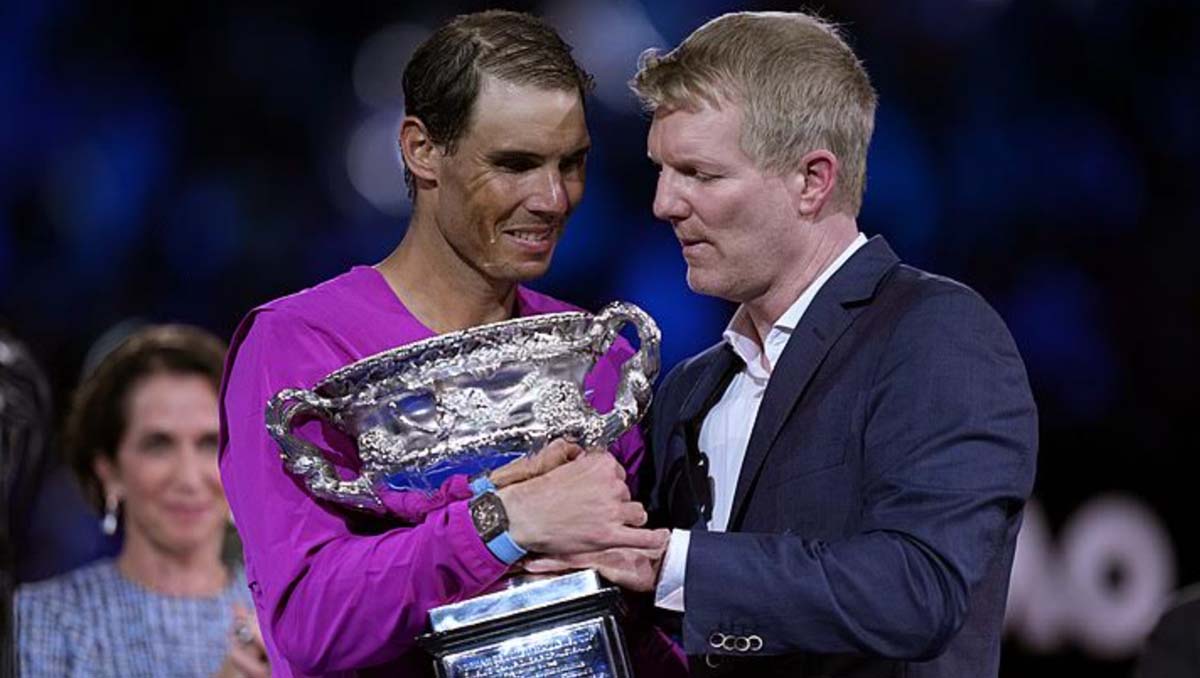 The last match of this year’s first Major was as highly anticipated as any during the tournament, even the crowd-pleasing victory of home favourite Ash Barty on Saturday.

For here was one of the greatest players of the 20th century, Rafael Nadal, now age 35 and back in action after almost five months away with foot injury, aiming to break the deadlock with his rivals Novak Djokovic and Roger Federer at 20 Major titles apiece.

Just weeks ago, it looked the most unlikely storyline in Melbourne. But Nadal arrived with his 89th title from the Melbourne Summer Set, and saw the defending and nine-time champion Djokovic denied his entry visa—his place taken by a lucky loser in the very half where Nadal was drawn. Then the biggest seeds in his quarter lost before he could meet them: first No10 Hubert Hurkacz, then No3 Alexander Zverev.

Steadily, he worked his way into prime position for a second-week assault, dropping just one set as he headed to the quarters. There, he was taken to five by the attacking leftie game of Denis Shapovalov. It was the kind of match on which Nadal thrives, and for all his fatigue afterwards, he knew he had a welcome three days off before facing No7 seed Matteo Berrettini, who had come through his second five-setter of the event to reach the semis.

Nadal never really looked like losing: His 500th match-win on a hard court and into his 29th Major final, his sixth at Melbourne Park.

That he had won the Australian title in 2009 meant that one more victory would earn him a very special accolade. Not just that record 21st Major but becoming only the second man in the Open era—and only the fourth man in history—to win each of the four Majors twice. Djokovic achieved a second career Grand Slam with his victory at the French Open last year, while Roy Emerson and Rod Laver were the only other players to have done the same.

But in his way was the man who denied Djokovic a record 21st Major at the US Open five months ago, the No2 seed Daniil Medvedev. The 25-year-old Russian was, indeed, the favourite for the title when Djokovic left the draw.

He had been runner-up to Djokovic in Melbourne a year ago, before joining a very exclusive club of men’s Major champions in New York. In 2021, he won more matches than any other player, and ended the season by leading Russia to Davis Cup victory, then won three singles and three doubles matches at the ATP Cup to open this season. 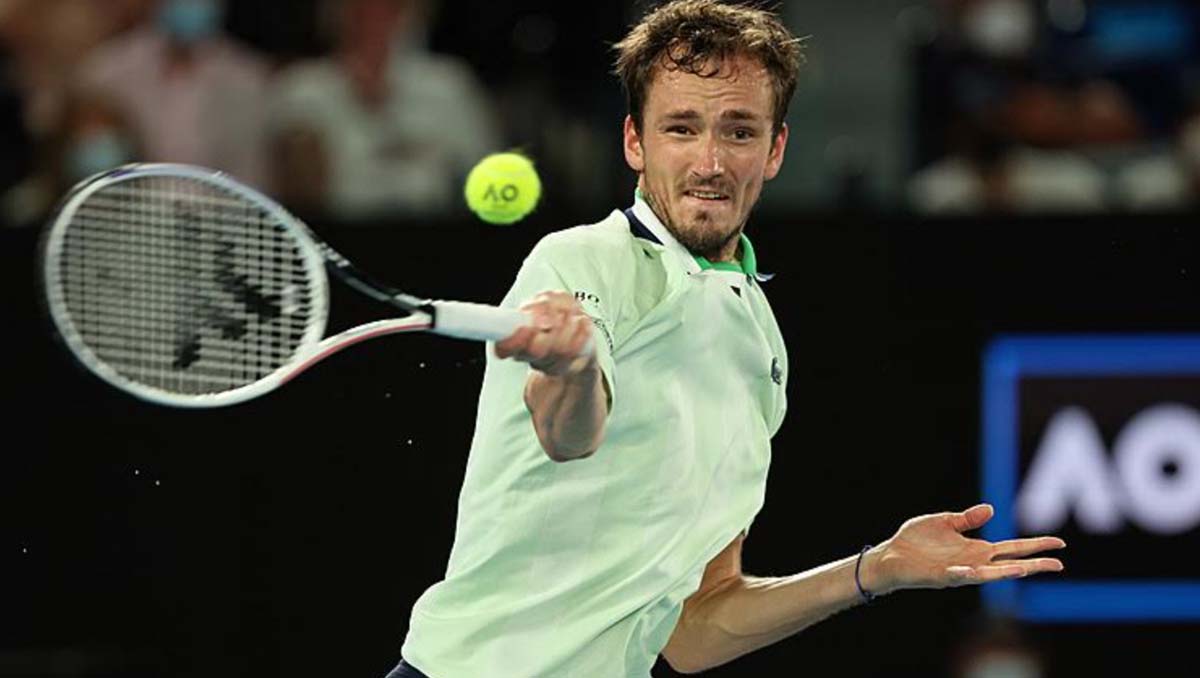 He came through a tough draw that included Nick Kyrgios, Felix Auger-Alisassime and finally Stefanos Tsitsipas, and in all, spent even longer on court than Nadal, 17 and a half hours. But now he had to try to deny another of the “20 Majors triumvirate” in a Major tournament, and he did so, knowing that the Spaniard had denied him in their only previous Major meeting, the US Open final of 2019. That lasted a little short of five hours: This would also go to five sets and last even longer.

The first game looked an easy hold for Nadal, but Medvedev worked him back to deuce, and only a net cord denied the break point.

A 26-shot rally tested both men’s accuracy and stamina in the third game, with Medvedev working a 0-30 advantage on Nadal’s serve. The Spaniard out-played him at the net, though the Russian did get a break point, only for Nadal to save it again with a touch volley winner.

The temperature was close to 30C, and the sweat was pouring off Nadal as he faced another break point. But he came through after more than eight minutes, deploying plenty of slice as well as his signature top-spin to break down the rhythm of Medvedev.

He pulled the Russian to the extremes of the court, controlling the centre like the conductor of an orchestra. But in the fifth game, Medvedev worked three break points, tracking down wide balls for pin-point returns. He drew the error for a love break, 3-2.

Nadal wavered again in the seventh game, two double faults, and Medvedev chased down a drop-shot to slot a forehand winner: another break to love, 5-2. With 42 minutes on the clock, the Russian served it out, 6-2.

The second set opened in a similar fashion, with tough battles on the Nadal serve, as Medvedev focused his flat angles at the Spanish backhand. The match was an hour old, and Nadal was already swathed in iced towels at the change of ends. 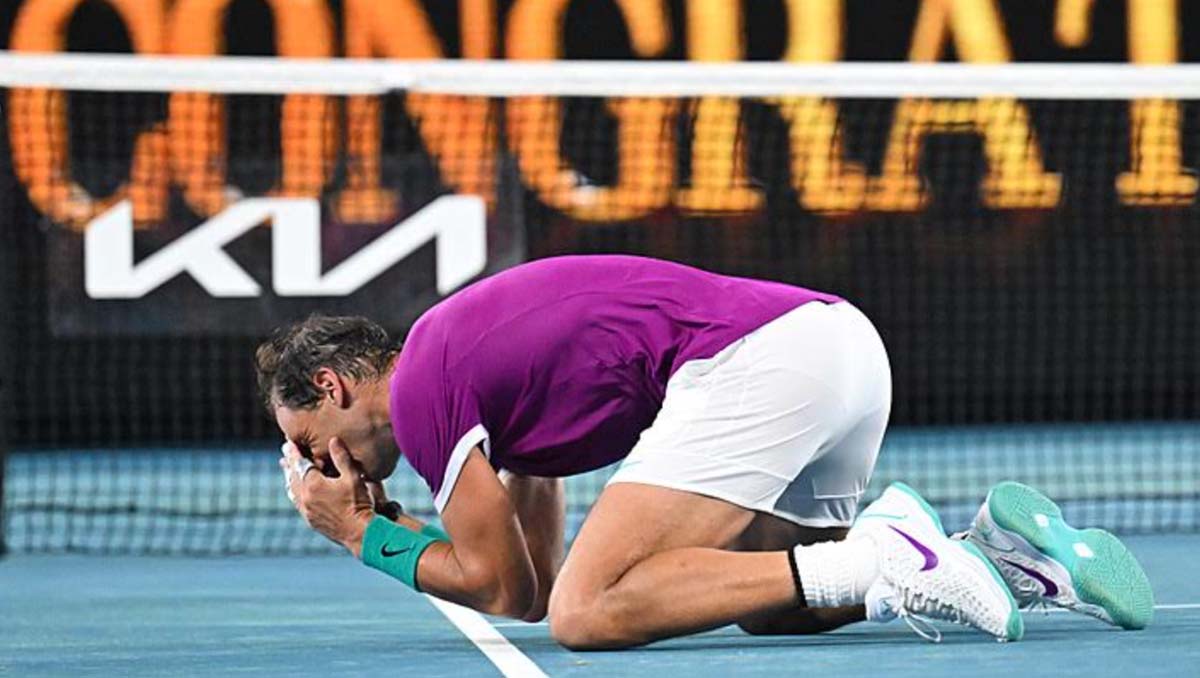 But it seemed to help: He got a 0-30 jump on the Medvedev serve for the first time, and a staggering 40-shot rally earned him two break points after a killer drop-shot winner. The fans went wild, and a backhand error from the Russian delivered the break. Nadal produced his first love hold of the match to rub it in, 4-1.

Medvedev, though, gritted his teeth, held to love, and then produced a couple of searing backhand winners to break back. By now, though, Nadal was starting to look like his familiar energised self, forcing errors in reply, and breaking again.

Medvedev, not disheartened, got more chances to break as Nadal served for the set, but after three deuces and four break points—plus a security scare when a spectator jumped to the court behind Medvedev—Nadal finally reached set point, but to no avail. At the fifth attempt, Medvedev broke, but could he hold, this time?

He did with some aplomb, finishing with a deft volley winner: 5-5. Nadal, however, was not for breaking, resisted two more deuces to hold: It was down to Medvedev to take it to a tie-break. He was struggling to find his first serve, but a timely ace and drive volley winner took it to 6-6.

First blood went to Nadal, 2-0, pulled back by Medvedev. Nadal again led, 5-3, but a run of superb points by the Russian, concluded with a backhand pass down the line, turned it around for the set, 7-6(5).

He appealed to the crowd for support, but there would be no turning the match on that front: The Arena was almost entirely behind Nadal. And the Spaniard gave them something to get their teeth into in the first game of the third, six deuces and a break point, but ultimately Medvedev held with two aces. He had less trouble on his next couple of service games, testing the 35-year-old legs of the Spaniard in the process.

And the Russian worked three break points with some jaw-dropping shots, but perhaps he too was getting fatigued: two errors, deuce, hold, 3-3. Indeed, there were signs that he was feeling the pace more than Nadal, who held with ease, and then got the break with a forehand pass to serve for the set. The arena erupted, and he could now do no wrong: four straight winners for a love hold, 6-4.

Nadal was still full of energy at the start of the fourth, and an explosive forehand winner fended off an early break point. A nine-minute hold, and he turned his energy on the Medvedev serve, and he broke at speed, 2-1, helped by a double Russian double fault. 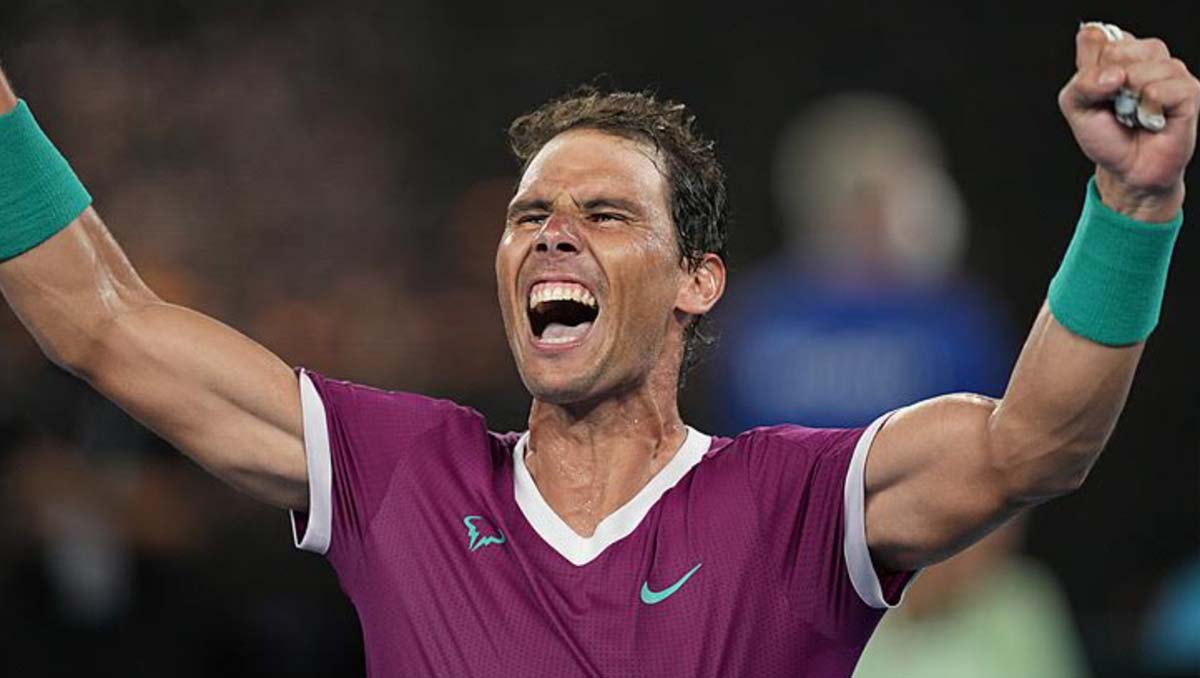 Medvedev responded to break straight back, but it was not enough: Nadal had his strut, three winners, and three break points. Finally after 10 minutes, on the seventh break point, Nadal pulled off a perfect backhand cross-court pass: 3-2.

The match was now four hours old, and Nadal was not the one struggling with energy and oxygen. More break points went begging as Medvedev’s drop-shot attempt found the net, and Nadal produced his second ace of the match, 5-3, then a love hold for the set, 6-4.

It was, then, a one-set shoot out, with Nadal holding the momentum and, it seemed, the energy supplies. Indeed Medvedev had to save another break point in the first game, and after a couple of love holds, the famed Nadal forehand down the line broke to take the lead, 3-2.

Yet again, Medvedev had the chance to break , his 21st of the match, and thus far he had converted just five. If he could not capitalise this time, it felt his challenge for the title may be up, and sure enough, the Rod Laver Arena erupted as Nadal held 4-2.

It had taken Nadal four hours 51minutes to deny Medvedev in the US Open final in 2019. This one was now up to five hours 10 minutes as Nadal stepped up to serve for the title at 1am. Remarkably, the Russian worked a 22nd break point, Nadal picked up a time violation, and conceded the break, 5-5. Yet he would not bow: Nadal broke one last time, and this time served out to love to claim that most valuable of titles, his 21st Major, 7-5.

At almost five and a half hours, this became the second longest Australian final after his gut-wrenching loss to Djokovic in Melbourne in 2012. It is hard to comprehend, then, how 10 years later, Nadal has been able still to play a match like this—and win it.

Medvedev was full of praise for his opponent, and had helped make this the thrilling spectacle it became: The Russian won more points, had more winners and fewer errors. In one key stat, though Nadal had the edge. He converted seven of his 22 break points; Medvedev was 6/22 in his.

He said: “It’s tough to talk after five hours and 30 minutes. I want to congratulate Rafa, what you did was amazing. I tried to play but I was really tired. The level was really high. You raised the level after two sets—and I thought you might get tired. You are an amazing champion.”

He concluded: “My parents, if you are still watching, I thank you for your support and I will try to be better next time.”

Now it was Nadal’s moment, and the Rod Laver Arena was an explosion of noise. Eventually, he was able to speak, addressing Medvedev first:

“I don’t have any doubt that you will have this trophy a couple of times in your career because you are amazing.”

Then he went on:

“I don’t know what to say guys. For me it is just amazing. I did not know if I would be back on the tour playing tennis again. You don’t know how much it means to be back here. You are amazing and thank you so much for all of your support.

“Without a doubt it is one of the most emotional of my career. To have the support I have received the last three weeks will stay in my heart. So many, many thanks.”

And who is to say that he will not go on to win a record 14th French Open, and extend his lead over Djokovic and Federer to 22? It seems, for the physical and mental force of nature that is Nadal, anything is still possible.