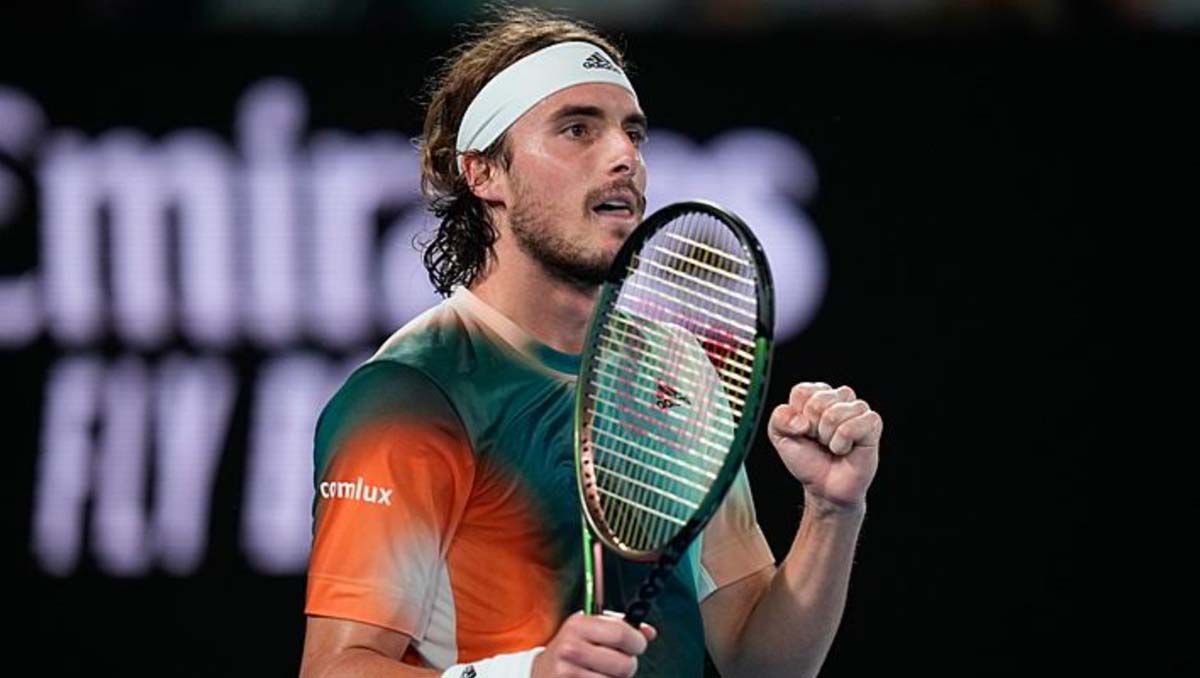 With the defeat of No3 seed Alexander Zverev by No14 seed Denis Shapovalov on Sunday, it fell to No4 seed Stefanos Tsitsipas to step up and become the second-ranked man to make it to the quarter-finals.

Daniil Medvedev was the top seed, despite being ranked No2, after defending champion Novak Djokovic failed to keep his visa just as the Australian Open got under way.

The Russian was also runner-up to Djokovic in last year’s final, and won more matches in 2021 than any other player, picking up his first Major at the US Open, and leading Russia to Davis Cup victory.

Consequently, he had become the favourite to win this year’s Australian Open, and had so far proven his credentials even after facing every fan in Melbourne to beat Nick Kyrgios in Round 2. He dropped a set to the Australian, but still looked in fine form, and he needed to be when he took on the tricky American, Maxime Cressy, a rare serve-and-volley exponent who had won nine matches so far in Australia after reaching his first final in the Melbourne Summer Set.

Cressy, ranked No70, was aiming to reach his first Major quarter-final in just his fourth main draw appearance at this level, and he certainly managed to make his mark and get under the skin of Medvedev.

So the top seed was safely into the quarters, though will again be tested by the ever-improving young Canadian star, Felix Auger-Aliassime.

The world No9 came back from a slow start to reach his third consecutive Major quarter-final, beating No27 seed Marin Cilic, 2-6, 7-6(7), 6-2, 7-6(4). It added another three and a half hours plus to a heavy week in Melbourne: Five sets against Emil Ruusuvuori, four hours 19 minutes to beat Alejandro Davidovich Fokina, and a more straightforward two hours to beat Dan Evans.

But Auger-Alisassime had not beaten Cilic in their previous three matches, and although the Croat played some of his best tennis to beat No5 seed Andrey Rublev, he could not match the 21-year-old Canadian, whose rich vein of form had also seen him win his first title after nine finals—with Denis Shapovalov—at the ATP Cup.

Medvedev leads Auger-Aliassime 3-0 in previous matches, including the semis at the US Open—the Canadian’s best run thus far at a Major—and even more recently at the ATP Cup.

Tsitsipas was the highest remaining seed in the top quarter of the draw, and his record in Australia was certainly a good one. Last year, he reached the semis, coming back from two sets down to beat Rafael Nadal before losing to Medvedev in the semis. He also reached the semis in 2019, when he beat Roger Federer in the fourth round and Roberto Bautista Agut in the quarters, before losing to Nadal in the semis.

The young Greek’s progress this year had not been seamless, and he had struggled with a leg injury at the end of the 2021 season. He lost sets to both Sebastian Baez and Benoit Paire. Now Taylor Fritz would be his first seed.

The No20-seeded American is Tsitsipas’s direct contemporary, and both were junior No1s, but they had not met on the senior stage since 2019—wins to the earlier bloomer, Tsitsipas.

The Greek, a runner-up at the French Open last year and winner of the Monte-Carlo Masters, was also a former ATP Finals champion, and had notched up wins against the very best: Nadal, Djokovic, Federer, Medvedev, Zverev.

In contrast, Fritz had won one title from six finals, but had been steadily climbing the ranks, ticking off new milestones, such as the semis of the prestigious Indian Wells Masters last autumn. And by reaching the fourth round of a Major for the first time in Australia, he would make his top-20 debut in the singles ranks. But now he had to beat a top-five player at a Major for the first time if he was to make the quarters.

Fritz took the early advantage after four quick serving games, pressing Tsitsipas hard in the fifth game. The Greek saved two break points, but a slew of errors in the seventh game conceded the break, and the American went on to serve it out to love, 6-4.

Each man held serve without trouble through the second set, right until the key moment. Fritz, serving to stay in the set, faced some different looks on the Tsitsipas return and struggled to manage the slice. Four errors, and he handed the break and set to the Greek, 6-4.

The first game of the third set was a marathon effort, with the first break point to Fritz saved via a 23-shot rally. Tsitsipas went on to face and save four break points, twice finding perfect backhands down the line.

Fritz was back in his groove, though, and fended off deuce for 1-1, before breaking down the Greek serve in the seventh game. A love hold, and the American led 5-3, and very nearly broke for the set, except for some exhausting, determined resistance from Tsitsipas. Six deuces, three break points and almost 10 minutes, and he forced the American to serve it out. Fritz did so to love, with a forehand winner, 6-4.

Tsitsipas was not bowed, though. Now serving first, he played with increasing aggression, his serve hitting 135mph, and he fired 15 winners in the set. It earned him the break 5-3, and he saved break-back points in similar style: a forehand winner and an ace for the set, 6-3.

There was not a break point on either side for eight games in the decider, but then Tsitsipas seemed to find a little more speed and inspiration to take the opening point in the ninth game in a spectacular 22-shot rally. It set the tone, and he broke to serve out the set as the clock hit midnight, 6-4, after almost three and a half hours.

The Rod Laver Arena erupted: It was packed, it seemed, with Greek supporters, and he thanked them profusely, pausing for breath: He was, he said, really tired:

“An epic match, that’s all I can say. I gave everything out on the court today, I am very proud of myself with the way I fought and the way I stayed consistent in the crucial moments.

“I knew it was going to get physical and I kept reminding myself to get in there, do the work and not give up. Just a little more patience and at the end it paid off. It was good to have the crowd with me.”

Tsitsipas will next play the 20-year-old No11 seed, Jannik Sinner, who continued his hot start to 2022 with a fine win over home favourite, Alex de Minaur, 7-6(3), 6-3, 6-4. The outstanding young Italian won all three of his matches at the ATP Cup, and had come through some tricky players, dropping only one set to Taro Daniel, before facing his first seed.

Sinner won four titles in 2021, made the final of his first Masters in Miami, and has now matched his quarter-final run at Roland Garros in Melbourne. He has faced Tsitsipas three times before, all on clay, winning just one of their encounters.