Chelsea FC are interested in pursuing a deal to sign Croatia defender Borna Sosa from Stuttgart, according to journalist Marc Behrenbeck

Chelsea FC are one of three clubs interested in a potential summer deal to sign Borna Sosa from Stuttgart, according to journalist Marc Behrenbeck.

The Blues have been linked with a number of left-backs in the January transfer window after Ben Chilwell suffered a season-ending injury back in November.

Although Marcos Alonso has deputised in Chilwell’s absence, Chelsea FC continue to be named in reports about left-backs to suggest Thomas Tuchel wants a new face this month.

Chelsea FC have been linked with a potential swoop to sign Derby County left-back Dylan Williams but at the age of 18, the Rams starlet would be a signing for the future.

The Blues were thought to be monitoring Lucas Digne’s situation at Everton before the France international ended up completing a switch to Aston Villa earlier this month.

But Sky Sport Germany reporter Behrenbeck took to Twitter to shed light on Chelsea FC’s interest in Sosa but explained the Champions League holders would wait until the summer to mount a bid.

Behrenbeck wrote on the social media site: “Aston Villa wanted Borna Sosa. Gave negotiations. But the deal fell through. Stuttgart want about 30 million Euros for him. Inter Milan and Chelsea FC are among others for the summer.” 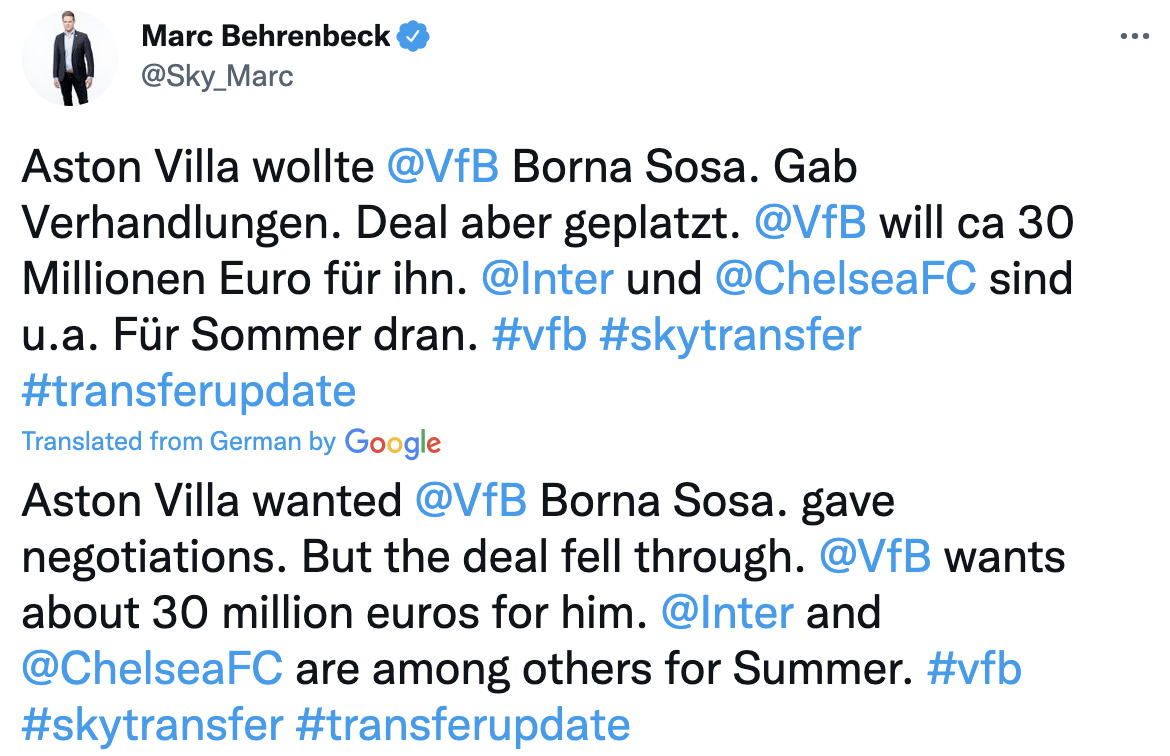 Sosa has scored one goal and has made three assists in 16 games in the Bundesliga in the 2021-22 season so far.

The 24-year-old has netted three times in 71 games for the German club since his move to Stuttgart from Dinamo Zagreb in 2018.

Sosa has been capped five times by the Croatia national team.

It comes as a surprise that Chelsea FC are so desperate to sign a new left-back considering Alonso is a more than capable replacement for Chilwell until the England defender returns from injury.

Chelsea FC were thought to be interested in a loan signing this month so they could temporarily add more depth to their team rather than shelling out on a permanent deal.

Sosa looks like a defender with good potential but whether he’d be a fit for a title-challenging team such as Chelsea FC and prepared to battle with Alonso and Chilwell for a starting spot in the long term is another question.