Chelsea FC are reluctant to sign a new left-back on a permanent deal this month, according to Daily Telegraph reporter Matt Law

Chelsea FC are reluctant to sign a new left-back on a permanent deal in the January transfer window but could look to recruit a new defender on loan, according to Daily Telegraph reporter Matt Law.

The Blues are being tipped to sign a new left-back after Ben Chilwell suffered a season-ending knee injury in November to leave a void in Thomas Tuchel’s starting line up.

Marcos Alonso is a more than capable deputy for the England international but the Premier League title challengers continue to be linked with a number of left-backs.

Chelsea FC have been linked with a potential swoop to sign Everton defender Lucas Digne and FC Barcelona full-back Sergino Dest in the January transfer window.

The Blues are also thought to be weighing up the possibility of bringing Emerson Palmieri back to Stamford Bridge from his loan spell at Ligue 1 side Lyon.

Law has cast doubt on whether the Blues would sign Digne from Everton this month considering the Toffees have a number of suitors who are prepared to strike a permanent deal.

The Daily Telegraph reporter added that Chelsea FC are unlikely to sign a new defender unless the south west London side bolster their defence with a loan signing.

Law wrote on his Twitter page: “Chelsea reluctant to sign a new l/b permanently in this window. Loan with an option a possibility if they can’t get Emerson back which is the first choice. Signing one permanently now would mean they go into the summer with five left backs at club which makes little sense.”

He continued: “Digne/Dest both options considered but there are two or three clubs willing to pay to sign Digne permanently now, which will be more attractive to Everton. Barcelona willing to let Dest go but would most likely have to start as a loan from Chelsea end.” 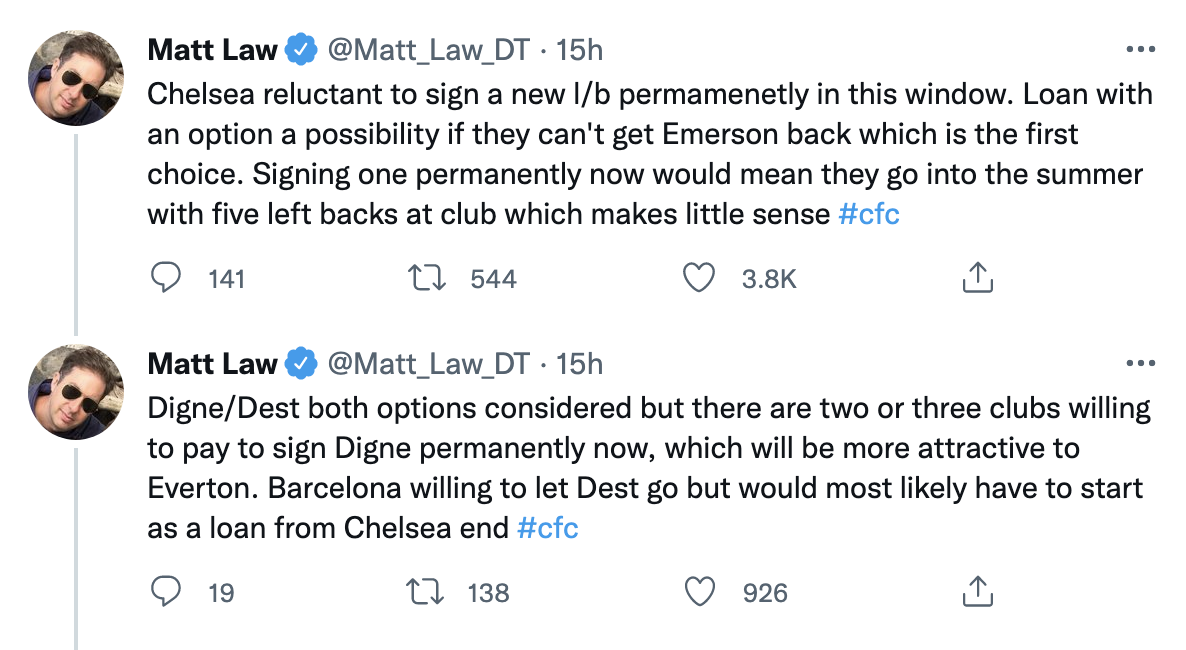 Romano wrote on Twitter: “Lucas Digne will leave Everton, never been in doubt. Three Premier League clubs interested, next week will be key – Chelsea are still waiting to decide on LB situation…

“Again, Digne will not join Newcastle. No way – and Lille are still hoping to keep Sven Botman.”

Digne has failed to score or make an assist in 13 games in the Premier League this season.

Chilwell had scored three times and made one assist before his season was cut short due to a knee problem.