Karatsev reached last year’s Australian Open semis via qualifying; this is now his third title, as he rises to career-high No15 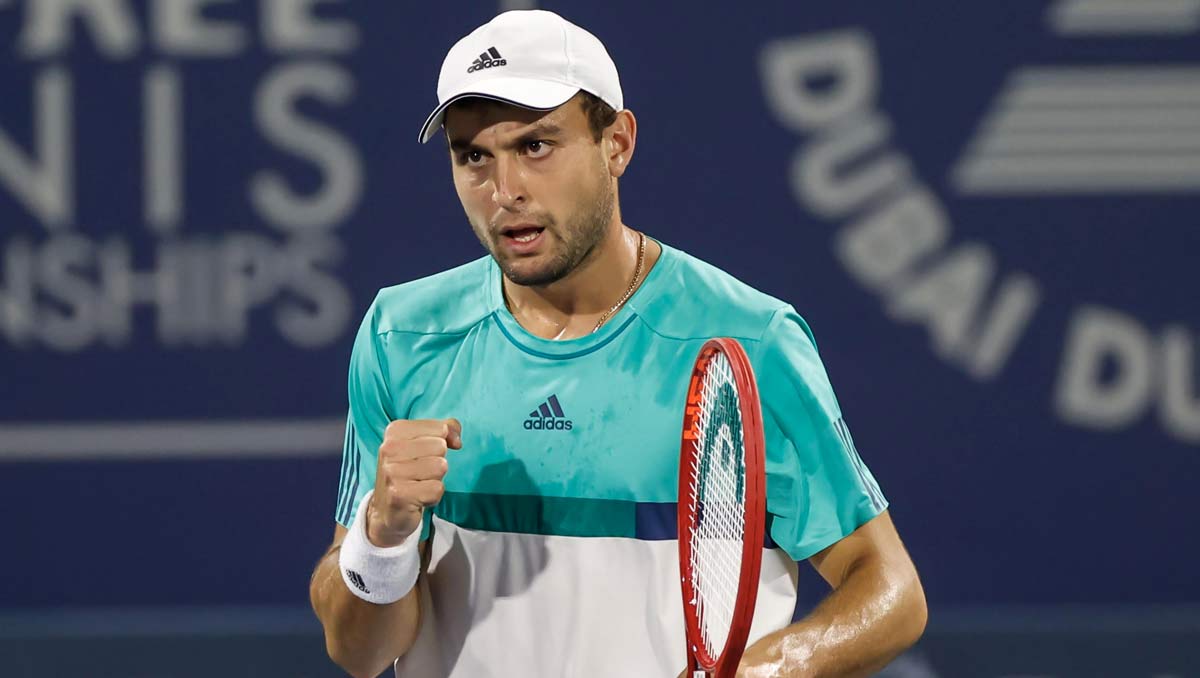 Both Andy Murray and Aslan Karatsev, the last two men standing in the Sydney Classic on Saturday night, had cause to feel at home in Australia.

World No18 Karatsev made a breakthrough statement a year ago with a semi-final run to the Australian Open’s semi-final via qualifying and a ranking of 114. He went on to win his first titles in Dubai and Moscow, picked up the ATP Award for Most Improved Player of 2021, and was now into a career fourth final—back in Australia.

As for Andy Murray, his long and admirable tennis story is packed with emotional Australian moments. Twice he began seasons with wins in Brisbane; five times he began with a runner-up run at the Open itself, coming up against Federer or Djokovic on every occasion. Bitter-sweet memories, of course, but none so bitter as the last time he played in Melbourne, back in 2019.

It was his first match there since 2017, and he has not played there since. Indeed many, including the man himself, feared he would never play again after that gut-wrenching five-set loss in Round 1 to Roberto Bautista Agut.

Yet here he was, through to the Sydney Classic final—his first final since October 2019—with a metal hip and after three years of work, injury setbacks and Covid infection, to try and make new memories.

Karatsev, who was forced to miss the ATP Cup after testing positive for Covid, also needed two three-setters against fellow seeds Lorenzo Sonego and Dan Evans. He had played late into the Sydney night on Friday, finally beating Evans after more than three hours. Perhaps that would take some of the sting out of the Russian’s sizzling shot-making.

More to the point, how much did Murray have in the tank? It was a long time since he had played five matches in a week—right back to the Challenger in Biella almost a year ago. And the last time he played at least two three-set-plus matches in a tournament was at Wimbledon: He played a four-setter, five-setter and three-setter on alternate days.

No wonder Murray had admitted after beating Opelka: “It’s already been a great week for me, big progress from anything I’ve done in the last year or so, to string four matches together like this and against top players.”

Murray certainly had most of the crowd support, but Karatsev showed just what a muscular opponent he was going to be, just how he made it to the semis at the Australian Open last year, and just how he managed to outlast and outhit Dan Evans the night before after more than three hours.

He was straight into his penetrating, powerful baseline strikes, switching corners at whim, and with a deft drop-shot thrown into the mix to open proceedings. He broke Murray in the opening game, then served to love for a 2-0 lead.

In the third game, though, Murray’s first serve kicked in for a love hold. It needed to: Karatsev is an aggressive player tactically, too, stepping in to take the second serve early and then dictate the rally.

Murray has always been able to deploy plenty of variety, backed up by formidable fitness, endurance and speed. But his opponent brought a similarly impressive range of skills to court, and served out 4-2 with a big serve-and-volley play.

He held for 5-3, again to love, with his 13th winner of the match thus far, and fired a 14th, this time on the backhand, with a return-of-serve strike. As a result, he was forcing Murray to go for more on his serve, and the Briton paid the price, with two double faults to hand the break and set to Karatsev, 6-3. The Russian had made just four unforced errors.

It seemed that, no matter how well and how hard Murray defended, and his lob is one of best in tennis, Karatsev was more than comfortable picking off smashes. What is more, he seemed to be playing within himself, unflustered, calm, sure of his game-plan and ball-striking.

Murray again faced break points in his first game of the set, found two big first serves, but his overall level on his first delivery languished at under 50 percent. He faced another break point as a Russian backhand again zipped through the court, and was soon 0-2 down, raising his hands in the air in despair.

Murray tried to out-touch him at the net, but came off the worse courtesy of a perfect angled slice from the Russian. Karatsev led 3-0, and with no sign that Murray could dismantle Karatsev’s tennis. He had, certainly, to get his first serve into play to stand a chance, and he aced to finally get on the board.

And at last, in the fifth game, Murray got his first break chance, when the Russian missed a couple of first serves. Murray went after the second serve, and the two men tried to outhit each other from the baseline—a scenario in which Karatsev had the last word.

Murray got another bite of the cherry, but could not break down the Russian. He roared in despair, just as Evans had done 24 hours before. But a fourth chance came, and on a second serve: still Karatsev out-played him.

This had become the make-or-break game, ticking through 10 tense minutes, to a fifth break point. But Murray missed the pass, and ultimately the Russian held: It felt like the last the nail in this final’s coffin: 4-1.

Murray nodded his head in appreciation, again rather as Evans had 24 hours earlier, when another wrong-footing winner beat him, leaving Karatsev with match-point. The Russian double faulted for the first time, and then Murray pulled off a backhand winner to delay the victory at deuce, but not for long.

Karatsev sealed the deal at the third attempt, 6-3, marking his third title, and a perfect appetizer to his Australian Open campaign. His winner-rate had again been outstanding, 29 to 14 errors, but the Russian brings so much more to the court: A calm, assured temperament, striking fitness and power, clean and accurate pace off both wings, and equally clean touch at the net.

This year, of course, Karatsev is seeded at the Australian Open, and with tennis of this calibre, will be a threat to all-comers. His problem, though, is that he has been drawn in perhaps the toughest quarter with, among others, Rafael Nadal and Alexander Zverev.

For now, his words were directed at the Briton and his achievements:

“I arrived a bit late to this kind of level, but especially to get this kind of player, one of the greatest players in the world and all time, for me it was really important match… What he does, it’s unbelievable to come back. I think it’s a huge comeback from him to play at this level after what he has [overcome] in the past with the injury.”

Murray must absorb those sentiments, of course: His story is an extraordinary one. In the moment, though, his emotions got the better of him as he spoke of his family at home. Simply: “I miss you all.”