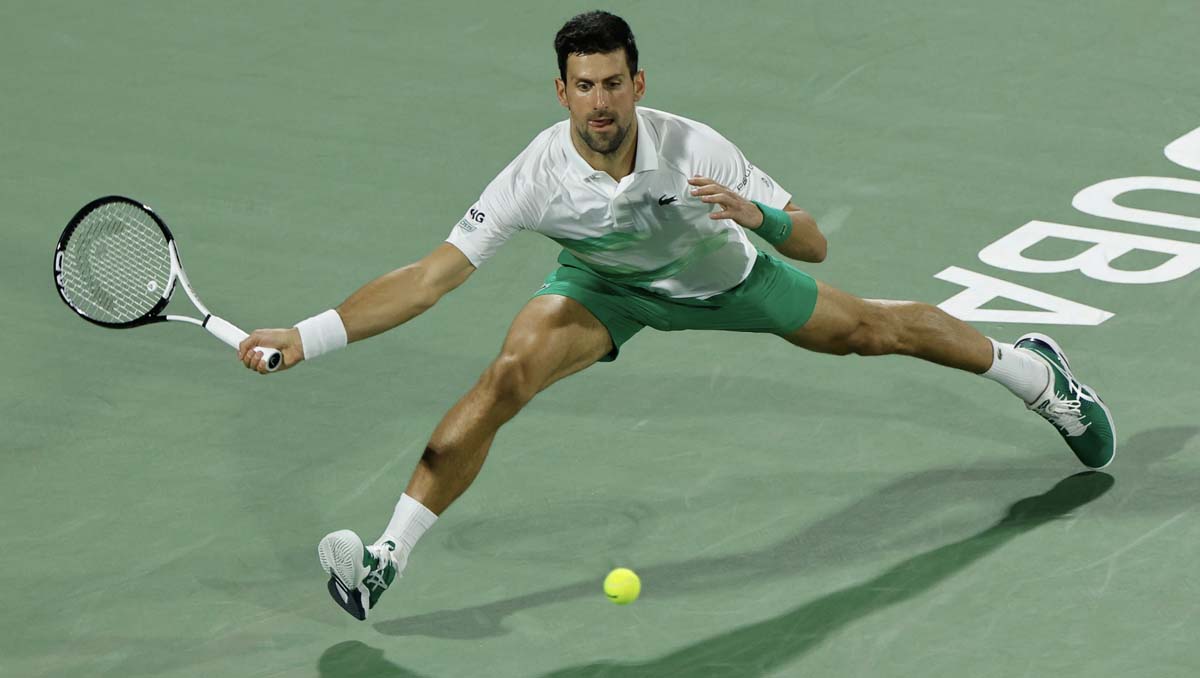 Novak Djokovic began his Dubai campaign, in his first tournament of 2022, knowing that it was not just a possible sixth title on the line but his residency at No1.

Of course, after accumulating a record 361 weeks at the top, and a current streak dating back to before the coronavirus pandemic drew a halt to the calendar for over six months in 2020, the day had to arrive eventually. And with his enforced absence from the Australian Open, plus the loss of Dubai points from his last victory at the ATP500, the time was now.

It came down to two factors: How far world No2 Daniil Medvedev progressed in the other ATP500 in Acapulco, and whether Djokovic could take at least one step further in the draw than his young rival.

So Djokovic came into his quarter-final knowing that he had to win to stay in the fight. And he had hit the ground running in Dubai, cruising past Lorenzo Musetti, and then fending off a strong challenge from Karen Khachanov to reach the quarters.

On paper, his next opponent, the 28-year-old Czech, ranked 123 in the world and into the draw via qualifying, should have posed few problems. Except that Jiri Vesely had once before played Djokovic, in Monte-Carlo way back in 2016, and had beaten him. He remained one of the few players to have a winning record over the mighty Serb.

And indeed, Vesely got first blood in the first set, an immediate break in a long opening game, and held comfortably for a 2-0 lead. But it did not take Djokovic long to hit back, a break, for a 3-2 lead.

However the big 6ft6in Czech produced another long challenge on the Djokovic serve in the seventh game and got his reward, a 4-3 lead, and he went on to serve it out, 6-4.

In the second set, there was little between the two men until a net-cord got Vesely the first break chance of the set. In fact, the Serb had barely dropped a point on serve in the set until now, and he saved the first break point with a great serve and volley. But a crunching backhand winner from Vesely converted the second, and it earned a huge fist-pump from the Czech. He led, 4-3, but now the real test: Could he hold onto his advantage against one of the greatest returners in tennis?

Sure enough, Djokovic fired off a couple of punishing returns of second serves and then Vesely double faulted to bring up break-back point. A 23-shot rally that would usually hand Djokovic the advantage instead drew an error for deuce. Vesely stayed aggressive and focused to hold, 5-3, but then Djokovic went for broke as the Czech served for the match.

An adventurous Czech serve and volley went long for 0-30, and all at once, Vesely faced two break points. He saved both with some enormous serves but a forehand wide offered up another bite of the cherry, and this time Djokovic took it: 5-5.

Vesely worked another break chance, only to see it snuffed out by pin-point serving from Djokovic. Now Vesely’s best hope was to take it to a tie-break, for he did not look as though he had the reserves for a third set against the supremely fit, supremely accurate tennis of the world No1.

Vesely served at 5-6, and hit an easy volley into the net to give Djokovic a glimmer of hope, 30-30, but pulled off a fine touch volley on his way to a hold. Come the tie-break, though, the Czech had to find first serves, or he would be toast.

He got the first advantage, a point against serve and two holds for 3-0. The margin was deceptive: they changed ends a 4-2, but a Czech volley error, and they were back on serve. Vesely forced one more mistake, however, and it created his first chance on serve to win the match. One final winner did the job, 7-6(4).

Vesely absorbed the moment, the ovation, and occasion, and rightly so. He had battled through two three-setters in qualifying to even get into the draw, and had now scored his second career win over Djokovic—and that after beating both Marin Cilic and former Dubai champion Roberto Bautista Agut.

For Vesely, a former No1 junior, this would be his first tour semi-final since Pune in 2020: It was indeed special:

And what of his feelings about opening the path to No1 for Medvedev?

“It is great for tennis to have someone new at No1. Novak is such a champion, he has been No1 for 361 weeks, but tennis needs new No1s and there is a new generation coming up—and I think it is great.”

Of course, what Djokovic has achieved is more than great: The statistics do not lie. And now, Medvedev will join Andy Murray as the only first-time world No1 since Djokovic first reached top in July 2011. And not since Andy Roddick 18 years ago has anyone other than Djokovic, Murray, Roger Federer or Rafael Nadal stood atop the ‘big four’.

Even so, there is no getting away from the fact that Djokovic could still return to No1—and add still more weeks to that record.

It has also been an eventful season for another young Russian, the 24-year-old second seed, Andrey Rublev. He started the year with a Covid infection that prevented him taking part in the ATP Cup, and lost in the third round of the Australian Open. But since then, he had begun to replicate the hot form that took him to five titles in 2020.

And when it came to the Russian’s form at ATP500 events in particular, his record spoke for itself: Four of his nine titles had come at ATP500 level, all won on the bounce between Hamburg in 2020 to Rotterdam in 2021.

And while he had arrived in Dubai this year on Monday night, after a run to both the singles and doubles titles in Marseille—preceded by a semi finish in Rotterdam—he had continued to show great resilience. In his opener against Dan Evans, he played some truly outstanding tennis, and then had to battle back from a set down against dangerous Korean Soonwoo Kwon, only to find himself in another exhausting three-setter against the Mackenzie McDonald.

But he recovered again from a set down, 2-6, 6-3, 6-1, after going 5-0 down and holding serve just once in the first set. He also had his back against the wall early in the second set as McDonald worked several break points. However, after soaking up that pressure, Rublev gained his first break of the match to lead 3-2. He broke again at 5-3, and in a reverse of the opening set, Rublev then built an intimidating 5-0 lead in the third set for the loss of just five points.

Rublev admitted to feeling the effects of so many matches this month:

“I feel completely tired, to be honest. I’m happy I was still able to win a match today. But I feel really, really tired. We’ll see.”