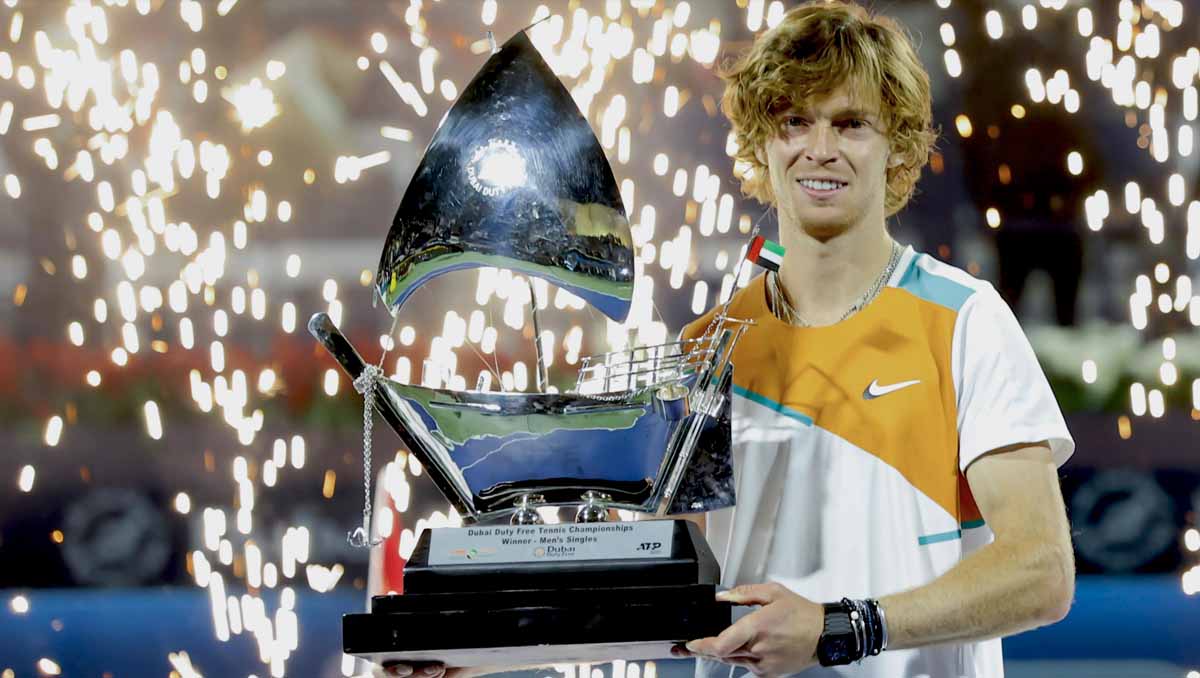 It was the conclusion of a stunning run for the No123 ranked Jiri Vesely, who had come through two three-set qualifying rounds to face a shocker of a main draw in Dubai.

After his efforts less than a week ago, he beat an outstanding run of opponents: Marin Cilic, Roberto Bautista Agut, world No1 Novak Djokovic, and No6 seed Denis Shapovalov to become the lowest-ranked finalist in this 30th anniversary year of the Dubai Duty Free Tennis Championships.

Now he faced his fifth straight past-or-present top-10 player in the shape of No7 Andrey Rublev in the hope of becoming the first qualifier to win the Dubai title.

His achievements, his big-time tennis, and his mental fortitude, especially in surviving his semi against Shapovalov from a set down in three tie-breakers after three and a quarter hours, had won many fans for the Czech, who was perhaps little known to the Dubai fans before this week. Now he was cheered enthusiastically at every turn.

But Dubai’s fans had taken Rublev to their hearts, too, for his own battling ways, and his bold message to the world after his home country invaded Ukraine while he played his way to the final: ‘No war please’. How poignant, given that the man with whom he won the doubles title in Marseille just days before, came from Ukraine.

But Rublev’s work ethic and mental focus had been on display all week. He arrived from Europe just the night before he opened his campaign in Dubai against the always-tricky Dan Evans, having won both the singles and doubles title, and having reached the Rotterdam semis the week before.

He looked exhausted before he began, but then came back from a set down three times in a row to reach the final, his 18th singles and doubles match in three weeks.

So who would win the battle of the former junior No1s after such sterling efforts to reach the title match?

Both men opened with strong service games, but Rublev threw in a love hold before attacking the Vesely serve for two break chances. He took the second, and then held with ease, 4-1. He went on to serve it out, 6-3, with a superb 13 winners for just three errors, and out-acing the Czech eight to three.

Rublev looked like a man on a mission, and started the second set just like the first, breaking in the first game, and holding with ease for 3-1. The Russian whipped the ball from both wings, leaving a weary-looking Vesely rooted to the spot.

The big Czech summoned up some more resistance to work a break chance in the sixth game, but shook his head as it headed back to deuce. The crowd cheered him on at another break point, and this time it worked, a break to level, 3-3.

The joy was short-lived, however: Rublev broke yet again, and would serve for the match. Even then, the gutsy Vesely would not back off, forced the game to deuce, but the young Russian finally served it out, 6-4.

An emotional Rublev sank to his knees in joy at his 10th title, his fifth at the 500 level, but perhaps also in exhaustion. He said:

“To be honest, I have no idea how I did it. I came here without any expectation. I was thinking, like, even if I’m going to win at least one round, it’s going to be something like a miracle. But somehow all the week was like, I don’t know, for me every ball, every line, everything was for me… This week I was super lucky.

He went on to admit that, yes, he was tired, but that his opponent was surely tired too after an extraordinary week:

“I think both of us were super tired… He beat top players. First round Cilic—I lost to Cilic a month ago. He beat Roberto, I always play three hours against Roberto. He beat Novak, it’s amazing. He beat Shapo 7-6 in the third. Trust me, when you beat these kinds of players, it’s almost impossible to stand up. Good job to him.”

Vesely was, for all his disappointment, positive about the week:

“It’s been a crazy week for me. Started in qualies, and when I saw my place in the main draw, amazing players. But suddenly I was winning match by match, It’s crazy.”

Rublev consolidated his place in the ranks at No6, but for Vesely, this turnaround in his fortunes—and he was a top-35 player when he was barely 21—has been a boost to his confidence. He has risen 49 places to No74, and ensured that no-one will want to see him in their part of the draw. Onwards and upwards.

Indian Wells 2022: Can Nadal stay perfect in the desert? Will Barty’s absence propel Swiatek or Kontaveit to title?