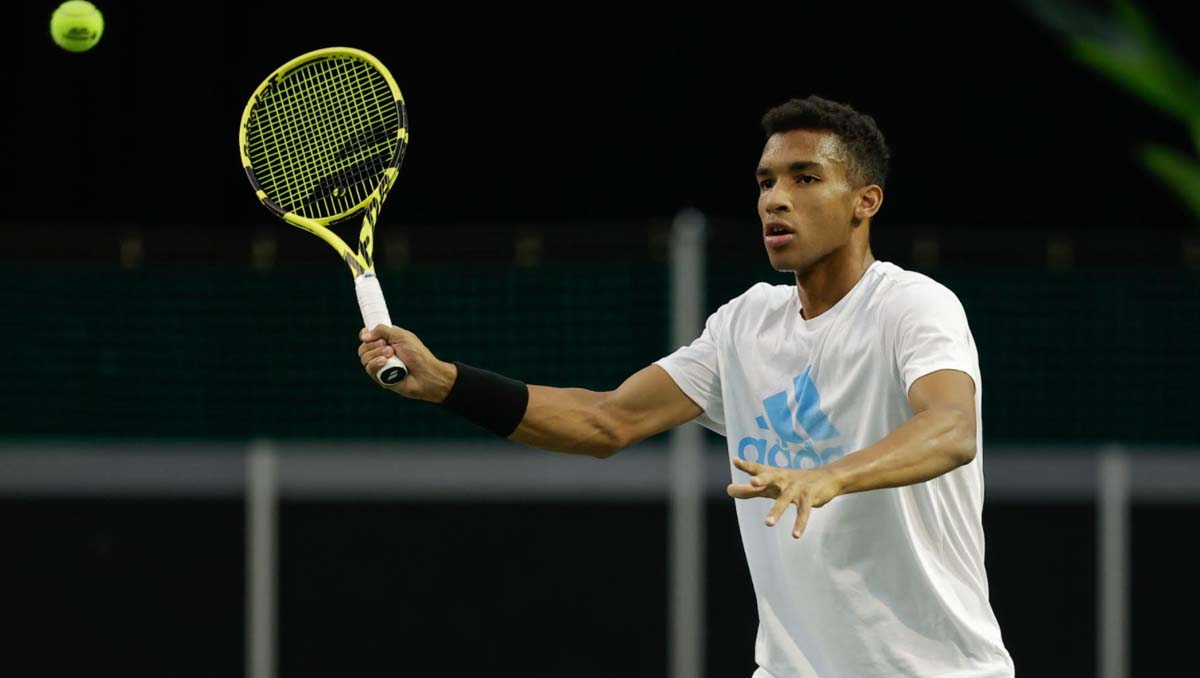 On Tuesday afternoon, one Canadian seed in this year’s Rotterdam 500 draw was forced out by a qualifier in the echoing Ahoy Arena. Denis Shapovalov, lately joint winner of the ATP Cup and then a quarter-finalist at the Australian Open, struggled to adjust to the demanding switch in time-zones, seasons and court conditions between Melbourne and the indoor courts of Rotterdam.

Of course, his Australian experience had also been emotionally and physically draining, not least his four-plus hours and five sets against eventual Australian champion Rafael Nadal. But he was clearly unhappy with his timing and consistency on the green indoor hard court in Rotterdam:

“Little bit difficult, mis-timing some of my shots… I felt like I was guessing every shot.”

And so the 20-year-old Jiri Lehecka, with some matches under his belt courtesy of two qualifying rounds, won his first main-tour match in two sets.

The question come Wednesday, then, was would Shapovalov’s team-mate in that ATP Cup victory suffer the same problem.

Felix Auger-Aliassime had made at least the quarters of his last three Majors, beaten in the US Open semis by eventual champion Daniil Medvedev and then in the quarters at the Australian Open just a fortnight ago, also by eventual runner-up Medvedev, this time in a five-set and near-five-hour thriller.

With his victory in Sydney alongside friend and compatriot Shapovalov, it consolidated his place in the top 10, and he played in Rotterdam as the third seed.

But in the early goings, it looked as though the younger of the Canadian duo—he is 21 to Shapovalov’s 22—was having the same problems as his compatriot in adjusting to the conditions, the pace, and the bounce of the court.

Just like Lehecka, Egor Gerasimov had acclimatised at the Ahoy via two qualifying matches, including a win over veteran Philipp Kohlschreiber, a man who become something of a resident at the Rotterdam tournament.

Auger-Alisassime could not find his range, and having failed to capitalize on an early chance to break in a long fourth game, he conceded a break to love, 2-3. A backhand winner down the line from the world 126 from Belarus then clinched another break for the set, 6-3, his ninth winner of the match.

It meant Gerasimov had the momentum going into the second set, serving first, and the Canadian had to dig in to hold for 2-2 after a more competitive passage that saw Gerasimov save break point, and then take Auger-Aliassime to several deuces.

But the Canadian’s level and read on the ball continued to rise in the fifth game, where he converted the second of two break chances, 3-2. He went on to exploit a growing number of errors in his opponent’s tennis to break again, and served out the set, 6-2, his fifth straight game.

The Canadian’s impetus continued into the third set with an immediate break, but Gerasimov finally got on the board, 1-2. And a couple of big forehands earned the Belarusian two break-back points. He looped a huge return to draw the error, 3-3.

Auger-Aliassime was not fazed, though: he upped the aggression for two more break chances, and he converted, with a clenched fist and plenty of encouragement from the fans.

It then looked as though Gerasimov might break again, and he had two chances, but this time the third seed held, 4-2. What is more, he broke again with a crowd-pleasing forehand cross-court pass in his best rally of the match. He allowed himself a roar, and would serve for the match, finally sealing the deal with a near identical forehand pass, 6-2.

It elicited perhaps the biggest ovation of the week so far: the young Canadian is clearly popular in these parts, and understandably so. He plays a lively, well-constructed brand of tennis, is fast and athletic, and remarkably composed for one of such tender years. And although he afterwards admitted that he was certainly not feeling very fresh after his exploits Down Under, he hoped to make more inroads in Rotterdam. He had, after all, been a runner-up in the tournament while still a teenager.

He does, though, find himself in a tricky segment, with the challenge of either former champion Andy Murray or the fast-rising Alexander Bublik, in the next round.

So Auger-Aliassime had escaped the fate of three other seeds in the first round: Shapovalov was joined by Nikoloz Basilashvili and Aslan Karatsev made opening losses. No4 seed Hubert Hurkacz put out Jo-Wilfried Tsonga to reach Round 2, but would have his work cut out against the talented 19-year-old Italian Lorenzo Musetti, already ranked 63 and with a fourth-round run at the French Open to his name.

Hurkacz, winner of the Miami Masters last year and Wimbledon semi-finalist, was soon looking in danger, broken immediately to face 2-0. He got a chance to level in a long eighth game, but instead was broken for the set, 6-3.

Musetti was showing what an exciting talent he is, and he boasts an appealing, attacking single-handed game that soon won over the Dutch fans. But he failed to capitalize on a chance in the second game, and came under pressure in the fifth. He continued to play on the front foot, coming forward, and forced a final error from Hurkacz to hold, 3-2.

Hurkacz had an opening in the seventh game, too, but some bold Italian serve and volley action and impressive defensive speed kept Musetti on track. The tall Pole’s serve gave him a love hold, and he was now rushing the youngster with his penetrating, flat pace. It earned three break points and a slew of errors—Musetti would hit 18 in this set alone—just as a tie-break seemed inevitable. Instead, Hurkacz served for the set, 7-5.

There was little to choose early in the third, both men taking the ball early, stretching each other to the corners, dropping and slicing: And Musetti was the first to benefit from an error, 5-3. This time, he calmly stepped up to serve out the match, 6-3, after more than two hours. It takes him to his second ATP500 quarter-final, with the first this time a year ago in Acapulco.

And he has, it seems, a smart head on his shoulders:

“[In Australia] I think I played with a little bit of stress. From a loss you take a lot of experience, especially as a younger one‚ which I am… I decided to play on indoor, hard court maybe my worst surface, but I’m really enjoying it. I hope to play another good match, fingers crossed…”

So another seeds has fallen, and Musetti will now fancy his chances of making the semis when he faces either the 51-ranked Dutchman Botic van de Zandschulp or qualifier Lehecka.

Rotterdam 2022: Shapovalov and Karatsev out at first hurdle in hushed Ahoy Arena