Rotterdam 2022: Shapovalov and Karatsev out at first hurdle in hushed Ahoy Arena 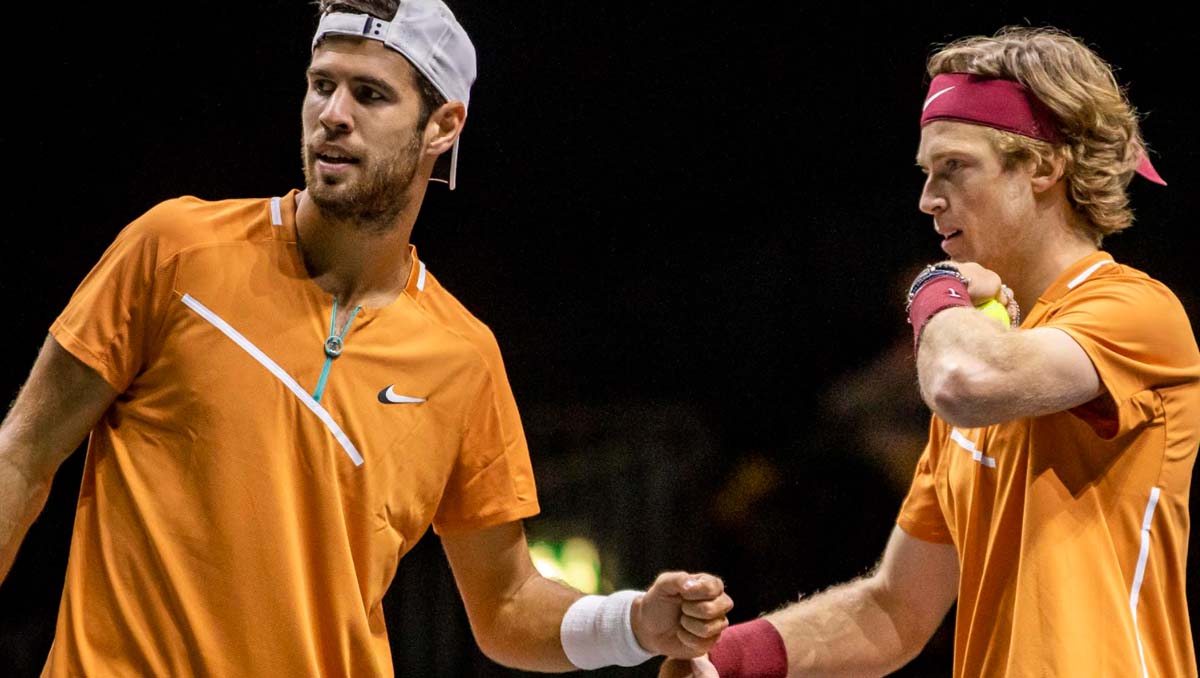 It is a hard enough transition for tennis players to switch from south to north hemispheres, summer to winter, outdoor sunshine to the subdued tones of indoor hard courts, all in the space of a couple of weeks.

After weeks of Australian sun and the thrills and spills of the first Major of the year in Melbourne, it was time to switch to the first ATP500 of the season, in the altogether cooler and windier city of Rotterdam.

This modern, confident and energetic city, the unofficial ‘gateway to Europe’, has hosted the popular men’s tournament for almost half a century—its 50th edition will be next year—and it has attracted the brightest and best as its champions: Roger Federer, Stefan Edberg, Boris Becker, Arthur Ashe, Bjorn Borg and Jimmy Connors among them.

Yet few can have played in such subdued environments as those in the huge Ahoy arena these last 12 months. A year ago, Rotterdam hosted a ‘behind closed doors’ event—which had become the norm during the global pandemic that kicked off just after the 2020 Rotterdam tournament.

But of late, players and fans have grown more used to open doors, even if the numbers have been ‘managed’ and proof of vaccination expected. But again in Rotterdam, the atmosphere is a shadow of its usual lively, bustling self, limited by ongoing restrictions in the Netherlands.

It is a double blow, then, for the players after the carnival atmosphere of the Australian summer. The big central arena echoes to the electronic line calls and polite if muted applause from the few able to get a ticket. Numbers have been limited to around a third of its usual capacity, with no access at all to Court 1, and the practice courts. The tournament must have heaved a modest sigh of relief when it was allowed at least some spectators, but without the bustling flow of fans around the rim of centre court’s lower tier, without the kids day or the fan zone, and with ticket-holders able to stay only for the first evening match, there is an unusual flatness to proceedings.

Not that it has discouraged some of the best players from signing up: Seven of the eight seeds are ranked 15 or above, and topped by world No4 Stefanos Tsitsipas and No7 Andrey Rublev.

However, for some, the turnaround, the contrasting conditions and perhaps the subdued surroundings proved tough. Take 22-year-old Denis Shapovalov, into Rotterdam after an emotional victory with Felix Auger-Aliassime in the ATP Cup in Sydney, and then an intense quarter-final contest with eventual champion Rafael Nadal in the quarters of the Australian Open—five sets, more than four hours, and ultimately a loss.

He had to hit the ground running on Centre Court against a man who had yet to win a main-tour match, the 20-year-old Jiri Lehecka. The young Czech had plied his youthful trade on the Challenger circuit last season, qualified for the Australian Open—he lost to Grigor Dimitrov in a creditable four sets—and qualified for Rotterdam’s main draw. Those extra two matches, it seemed, helped him against the Canadian who was mis-timing, overhitting, struggling to build any intensity.

Lehecka broke early in the first set, and although Shapovalov had chances to level again, he saw the Czech serve out the opener, 6-4, and was swiftly broken in the second set, too. This time, the Canadian broke back and seemed to have found his range, but Lehecka broke again, and fought off a flurry of break points to hold his advantage, 4-2.

With Shapovalov growing frustrated at his lack of accuracy—and his error rate cranked up to 32 by the end of the match—it took little more from the Czech to serve out the win, his first on the main tour, 6-4.

There was considerably better news for the defending champion Rublev, who beat qualifier Henri Laaksonen, 6-4, 6-4, in a scant hour and a quarter. He saved the only break point he faced in the match, when serving for the first set, and won 27 from 33 first serves.

The Russian, who missed the start of the Australian summer after a Covid infection prior to the ATP Cup, has proven himself a fan of indoor courts before: His Rotterdam title last February was his third ATP500 win in a row, all of them—Vienna and St Petersburg too—played indoors.

However, while Rotterdam was his only tour title last year, he played a big part in winning the Davis Cup for Russia at the end of the year—also indoors—as well as reaching his first Masters finals in Monte Carlo and Cincinnati.

Rublev’s compatriot Aslan Karatsev, who burst onto the scene at the start of 2021 with a blazing run via qualifying to the semis of the Australian Open, then won Dubai, was less successful. The Russian No7 seed began the year with the Sydney title, but he lost his opener in Pune last week, and did the same in Rotterdam in a see-sawing match that had the few centre court fans backing his opponent: Dutchman Tallon Griekspoor.

The home player, ranked at a career-high No62, was outplayed in the first set, 2-6, and Karatsev went on to serve for the match in the second, only to be broken and then out-scored in the tie-breaker, 7-6(2).

The two men were nip and tuck in the third, with breaks on either side before the Dutchman took the lead for the first time with a hold, 5-4. The usually calm Karatsev smashed his racket at his missed chances, and come the tie-break, could not resist the serving of his opponent, 7-6(0).

It marked the third seed to exit at the first hurdle in Rotterdam after Nikoloz Basilashvili lost to Mackenzie McDonald on the opening day.