Talks between Liverpool FC and Mohamed Salah about a new contract have “broken down” since December, according to Italian journalist Fabrizio Romano.

The Egypt international has been in sparkling form for the Reds this term and has so far scored 28 goals and made 10 assists in 35 games in all competitions for the Merseyside outfit.

Salah, 29, has firmly established himself as one of the leading forwards in European football in recent seasons and he was a key part of the Reds’ Champions League and Premier League title triumphs under Jurgen Klopp.

His current contract at Anfield is set to expire in the summer of 2023 and there is yet to be any official indication about whether he will pen a new deal with the club.

According to Italian reporter Romano, talks between the club and the player have reached something of an impasse since the turn of the year.

However, Romano also claims that Salah’s “priority” is to stay at Anfield, with Liverpool FC set to make the next “move” in contract negotiations.

Posting on Twitter on Friday, Romano said: “Salah and his agent have no intention to accept current new contract bid from Liverpool. Talks have broken down since December, as things stand.

“Mo’s priority is to stay – but not at current conditions. Let’s see Liverpool next move.” 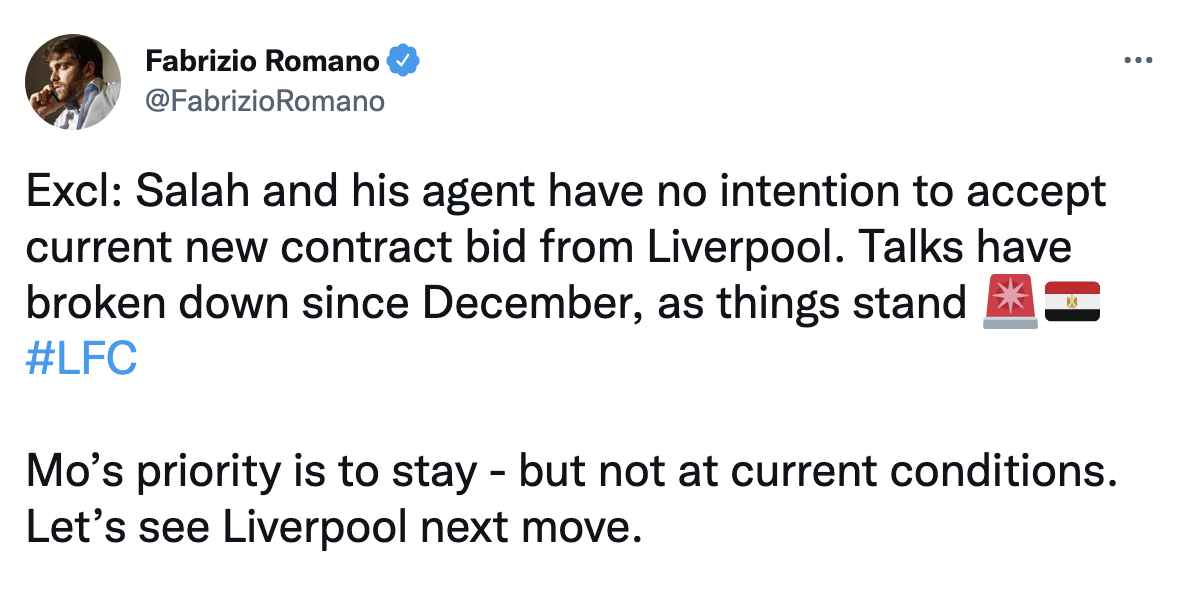 “You should be wary as a Liverpool supporter that this is dragging on,” Carragher told Sky Sports in January. “Other big players at Liverpool have signed contracts in the last three or four months, the goalkeeper [Alisson], Trent [Alexander-Arnold], Virgil van Dijk.

“I would want this done as quickly as possible, that’s not a case of just giving a player what he wants, but you can’t forget the price that Liverpool signed Salah for.

“It’s not like they went and spent £100m on Mo Salah, they did a brilliant deal, which is what Liverpool are great at.

“The money they’ve spent on him in terms of transfer fee and wages have been a snip compared to what Liverpool have had.”

Salah will be expecting to start when the Reds head to The Emirates to take on Arsenal in the Premier League on Wednesday night.