Mohamed Salah is “not planning” for a move to La Liga and is only focused on Liverpool FC despite the clock ticking down on his contract at Anfield, according to Italian reporter Fabrizio Romano.

The Egypt international’s current contract at Anfield is due to expire in the summer of 2023 and Liverpool FC will be keen to avoid the possibility of the forward leaving on a free transfer at the end of next season.

Salah has been in excellent form for Liverpool FC this term and his performances for the Reds have been a driving force behind their challenge for trophies on all four fronts.

The Merseyside outfit are naturally understood to be keen to convince Salah to stay and sign a new contract with the club.

According to Italian journalist Romano, talks over a new contract at Anfield are “broken” and it’s up to the club to reinitiate negotiations with the player.

But Romano also says that Salah is not pushing for a move away from the Merseyside club this summer.

Posting an update on his Twitter account, Romano said: “Mo Salah’s currently not planning for La Liga move. He’s not desperate to leave this summer – his contract expires in June 2023 when he could leave on a free, Mo’s only focused on Liverpool as of today.

“New contract talks still broken – it’s only up to Liverpool.” 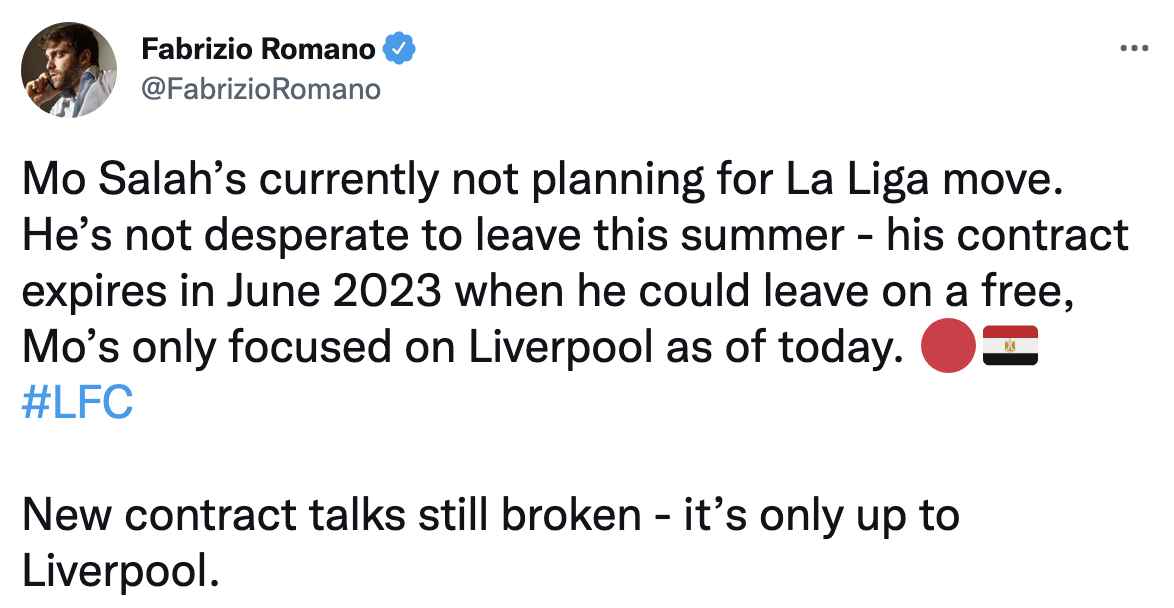 Salah has netted 153 goals in 238 games for Liverpool FC since having signed for the Reds from AS Roma in the summer of 2017.

Liverpool FC are back in FA Cup action on Sunday evening when they travel to face Nottingham Forest in the quarter-finals.

They are then back in Premier League action on 2 April when they host Watford at Anfield.