Man United's search for a new manager is "still ongoing", according to Italian journalist Fabrizio Romano

Manchester United’s search for a new manager is “still ongoing” despite the club having interviewed Ajax boss Erik ten Hag in recent days, according to Italian journalist Fabrizio Romano.

The Red Devils are on the hunt for a new permanent boss to take over from Ralf Rangnick at Old Trafford at the end of the season and speculation has been rife about who the club are likely to appoint in the summer.

Ajax manager Ten Hag has been touted as one of the main contenders for the Old Trafford job along with PSG boss Mauricio Pochettino.

Widespread reports in the British media this week suggested that Manchester United had recently interviewed Ten Hag about the possibility of him taking charge at Old Trafford in the summer.

According to Romano, the Ajax boss “feels ready” for the challenge of taking charge of a Premier League club and his English level has improved.

However, he says that the Red Devils have still not made a final decision about who their next manager will be and that they will continue to speak to other potential candidates.

“Man Utd are happy with his English level – but final decision will involve many factors. The board will interview other candidates too.”

He then added in another tweet: “During the meeting, Erik ten Hag wanted to hear about Manchester United budget and plans for the future. His English level has now improved – ten Hag feels ready to try Premier League experience soon. 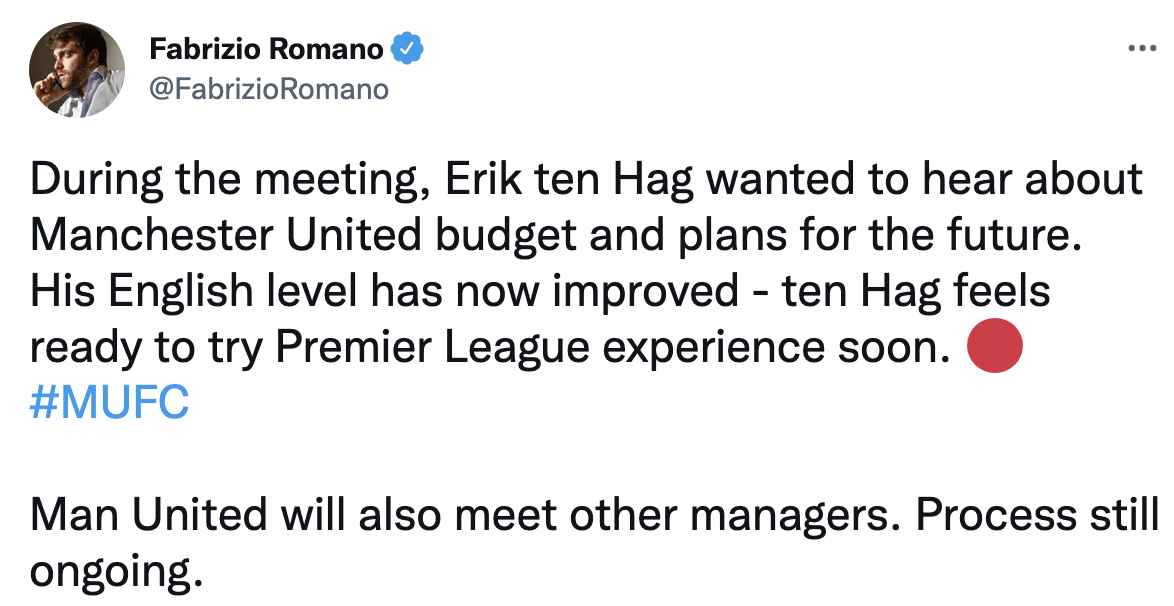 Manchester United have been on the lookout for a new permanent boss since Ole Gunnar Solskjaer was sacked by the club towards the end of last year.

The Red Devils chose to bring in Rangnick as a temporary replacement for Solskjaer until the end of the season, with the German head coach set to move into a consultancy role at the club in the summer when the new manager takes charge.

Meanwhile, Manchester United find themselves outside of the top four spots in the Premier League as they prepare to return to action with a home clash against Leicester City after the international break.